There's always been a debate about whether morning training is better than late afternoon or evening training. There's just never been a consensus.

With no real scientific guidance, most of us choose to work out when it best suits our schedule. Morning lifters come in before work so they can have some semblance of a normal social life or family life after work. Late afternoon or evening lifters may choose that timeframe because for them, the gym is their social life or "family" life.

Others base the time of their workout on observation. The late Charles Poliquin noted that most world records get broken about three in the afternoon, so he thought that late afternoon workouts might be better – something to do with biorhythms, if memory serves.

Others probably bend to historical precedence. They might have watched too many cowboy movies and heard, "We ride at dawn!" so many times that the alleged value of morning work became entrenched in their consciousness.

Or maybe they just like working out with the old guys wearing circa 1980 Larry Bird shorts instead of dealing with the distraction of women wearing libido levitating Lululemon yoga pants.

In any event, a new meta-analysis of time-of-day training just came out. While it doesn't prove the superiority of one timeframe over another, it'll definitely put your mind at ease over whether your current choice is the right one.

Australian scientists collected all the studies they could find that compared the efforts of morning lifters to evening lifters. In order to cull the research down into something meaningful, they tossed out those that didn't equate training variables like frequency and volume. They were left with 11 studies.

The difference between the morning and the evening lifters, in both strength and hypertrophy, was negligible. The researchers wrote:

Based on their findings, they concluded that lifters adapt to whenever they choose to train and their choice should be based purely on the time of day that "facilitates long-term adherence."

There was one additional finding/recommendation that might prove useful to competitive athletes. Let's say you know that an upcoming competition (in weightlifting, or presumably any athletic event) is going to take place at noon. The researchers thought that it might be a good idea to organize at least some of your training to coincide with the competition time of day.

In other words, you would do some lunchtime workouts so your body acclimates to that time period. That way, you'd "ensure a positive time-specific performance."

That which does not kill us makes us stronger... and faster, and bigger, and a hell of a lot tougher. Here’s how to use a pushing sled to get it all.
Fat Loss Training, Metabolic Conditioning, Powerlifting & Strength, Training
Joe DeFranco January 6 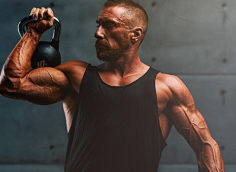 Can you pass this test? It'll tell you a lot about the health of your hips, and it can even help fix tightness.
Exercise Coaching, Tips
Tom Morrison February 28