A lot of unfortunate things happen when a man hits his forties or fifties. His skin starts to resemble distressed leather and he leaves behind a winter storm of dead skin flakes whenever he gets up off the sofa.

Stiff hairs and strange growths start to sprout from his body, making him look more like a potato that's been stored under the sink too long than a man.

He also finds himself giving up on colorful, presumably flattering underwear and gravitating towards the same, 5 in-a-bag discount, asexual, tightie-whities his mom used to buy for him when he was 10 years old because, realistically, there's no scenario where any woman aside from an emergency room nurse is going to see him with his pants off.

On the weightlifting front, he finds his progress slowing. Muscle comes hard while fat comes easy. His joints and muscles ache so bad in the morning that he wishes he could just call an Uber to take him straight to the can.

But maybe all these age-related assumptions are just stereotypes, especially the ones related to weight lifting, because American researchers have discovered that as far as recovery rates, there's no real difference between men in their 20's and men in their 40's or 50's.

The men were asked to train one leg on an "isokinetic dynamometer," which is a kind of glorified leg extension machine with electronic readouts. Their training protocol consisted of 8 sets of 10 reps with 60 seconds of rest between sets.

The scientists measured max voluntary isometric contractions and isokinetic peak torque, along with blood values to determine levels of inflammation. Blood samples were taken before lifting and immediately after lifting and were repeated 30, 60, 120 minutes, 24 hours, and 48 hours post-exercise.

The results revealed no differences between max voluntary isometric contractions and isokinetic torque. More importantly, there were no between-group differences between myoglobin, creatine kinase, C-reactive protein, or interleukin-6, all markers of recovery or inflammation.

The researchers concluded that, "...this study indicated no differences in the recovery response between young adults and middle-aged adults for any of the performance measures, nor in subjective levels of muscle pain or soreness. Furthermore, no between-group differences were observed in the inflammatory or muscle damage response to the exercise protocol."

So maybe this study will help put to bed some of the misconceptions about age and lifting. Too many people have it in their minds that 40 or beyond is some sort of real, tangible barrier to progress.

Granted, older lifters need to stay mobile and flexible, because that's where real aging will manifest itself if you're not diligent with your stretching, mobility drills, yoga, Kama Sutra sex, or whatever you do that keeps you from turning into a human floorboard.

Other than that, older lifters shouldn't necessarily temper their training or their goals because of fears they're in the throes of codgerdom. Progress should continue just fine, thank you. 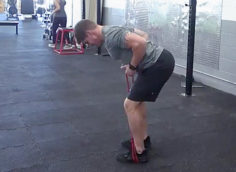 Do this warm-up before any upper body workout to prime your body for heavy lifting.
Back, Exercise Coaching, Tips
Barry Vincent July 3

Most trainers insist that you change your program every 4 weeks. This is complete and utter BS.
Bodybuilding, Training
Christian Thibaudeau February 25 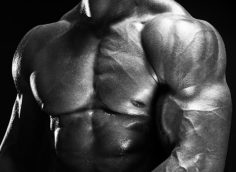 This upright row variation is safer and works even better than the traditional version. Check it out.
Bodybuilding, Shoulders, Tips, Training
Paul Carter November 9