Here are two butt-builders you probably haven't tried before:

Let's assume you already do the barbell hip thrust so we can skip over the basics and focus more on the points of difference by using the landmine.

Here's what it requires:

The traditional single-leg hip thrust is a valuable exercise. But many find it too unstable to lift sufficient load, or at least nowhere near what they can hip thrust bilaterally.

A landmine offers an element of stability, largely because of its attachment to the floor. By adding a landmine to a single-leg hip thrust we can create some stability and better glute output.

Let's assume you've mastered these with your own bodyweight. Here's what this loaded variation requires:

In a study by the American Council of Exercise, researchers found that the quadruped hip extension achieved greater glute activation (both maximus and medius), and outperformed a number of common lower-body exercises such as squats, lunges, and leg presses (1).

The quadruped hip extension exercise (sometimes called glute or donkey kicks) can be a useful glute isolation exercise. Don't compare these to your primary glute exercises; think of them more like a secondary or assistance exercise to sprinkle into your workouts.

The quadruped hip extension is truly a great option but, with very few ways to add weight, putting significant load through your glutes and challenging lower rep ranges can be an issue.

The landmine quadruped hip extension is an efficient way to add weight. Not only do you have the option of adding load to the bar as your strength gradually builds, the size of the bar and support from the landmine allows the weight to comfortably sit there.

Plus, look at where the load's placed. Not only are you able to gradually add weight, but where it's sitting is allowing the load to bypass those distal hamstrings, which are more involved in knee flexion. This will force your proximal hamstrings and glutes to work harder. Say hello to a killer "glute-ham tie-in" area.

Quadruped hip extensions can be done with your hands on the floor or elbows on a bench. The point is, you should feel as locked-in as possible, so whichever set-up you choose needs to reflect that. Most seem to prefer the feeling of the bench.

Since you're on all fours, there's a large stabilization requirement from your core musculature. As you reduce your base of support by extending one hip, it's working extremely hard to resist rotation. Since your aim here is to work your glutes and not the rest of your core, any hand or arm position you can use to help assist is fine. You may even adopt a super-wide arm position as the load gets heavier.

It's important to do both unilateral and bilateral glute exercises. While bilateral might be better at activating more muscle and creating some hypertrophy, unilateral is better for hip coordination, stability, and ironing out imbalances.

The exercises above combine some of the benefits of both worlds and solve some problems that come with the more traditional variations. Don't knock 'em until you try 'em!

This exercises was the original go-to movement for upper-body mass and strength, and it still offers major benefits for bodybuilders. Check it out.
Bodybuilding, Overhead Press, Training
Chris Colucci June 30

If you think full body training is just for noobs, you're missing out. Here's how to bring back the gains with this advanced approach.
Bodybuilding, Powerlifting & Strength, Training
Paul Carter June 9 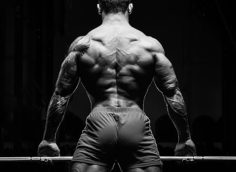 Your lack of progress probably isn't due to your program or your genetics, but instead an atrophied work ethic. Here's how to build it.
Training
Charles Staley June 4