Due to their high force nature, the Olympic lifts are a functional way to build upper-body size and strength. You just need to pick the right variation, while avoiding common hideous techniques. Try kneeling snatches.

Kneeling snatches offer a number of unique benefits. Compared to regular barbell snatches that start from a standing position, kneeling requires more force to be generated by your upper body.

We know that mechanical tension is arguably numero uno as a muscle growth trigger. We also know that to create it, high amounts of force need to be generated. (The amount of force over a given length of contraction factors in too, but let's stick to the point for now.)

Since force is the product of mass multiplied by acceleration (F = M x A), we can say that you need to either lift heavy weights slower, or lift lighter weights more explosively.

Kneeling snatches require moderate weights to be lifted explosively. Not only do they generate a lot of force, but because of their unique setup they're also better suited to more volume, versus more traditional Olympic lifts where technique easily breaks down.

Using dumbbells will give your shoulders more free reign, allowing a more natural movement path upwards. On the way down you can further benefit from an accentuated eccentric (lowering slowly).

Here's what a basic kneeling dumbbell snatch should look like:

A Note to Olympic Lifting Purists

You might be asking, "Why are your hips not extending before your elbows bend" or "why isn't there much of a shoulder shrug?" Fair questions.

Although they share the name, kneeling snatches shouldn't be compared to the real thing. If anything, they resemble more of a muscle snatch starting from mid-thigh. But clear differences exist in that comparison too.

Kneeling snatches are not about getting a bar over your head in the most efficient way possible; they're about creating a hypertrophy stimulus for your upper body. Second to that is the element of power and explosiveness they provide, bringing some athleticism to your hypertrophy training.

What coaching cues you use for kneeling snatches can greatly change the emphasis, too. While you do get somewhat of a "whip" effect from the ground up, your arms and hips move at about the same time. This is unlike the triple-extension you see with the full barbell snatch.

Whether you want to do it with or without an exaggerated shrug is up to you. Cueing "hips through and shrug" will better recruit your upper traps, while "hips through, rip the dumbbell from the floor" will arguably bias more arm and shoulder recruitment.

Not only can you handle more weight with just one arm (the bilateral deficit tends to be pretty big with these), it's a good opportunity to add unilateral work. Single-arm snatches also place some emphasis on cross-body and rotational power.

Whether you're involved in sport or not, power output is essential. Have you ever noticed how an older person moves much slower than you do? That's because the age-related decline in movement velocity is inevitable.

Studies show it'll be the first thing that goes, before your strength and way before your last colored hair. Exercises like kneeling snatches and heavy kettlebell swings will help you stay sharp.

Your hip extensors can't help you out much from a kneeling position. And going bent-knee slackens your hamstrings, rendering them pretty useless.

The reduced hip range of motion can be compared to a half-drawn bow string. At the start you can't produce as much elastic tension in your backside. This means you have to work harder and with less weight compared to standing variations.

Adding a dead-stop to the mix can make kneeling snatches even harder. Since you can no longer use stretch-reflex mechanisms to get the weight up, contractile components come into play more.

So, instead of using the spring-like elasticity of muscle and connective tissues, there's more force generated from muscle contraction alone. Overcoming the inertia of a dead dumbbell on a low box is the best way to do it.

You can also start from a box using just one arm at a time. Single-arm variations also tend to be better for a focus on the eccentric portion of the lift. As you fight the load dropping on one side, you can keep form tight and tension high.

A Barbell Works Too, But...

For shoulder health and performance, dumbbells offer the most options.

For some, a barbell can work great too. All you need to do is adopt a "clean grip" when snatching overhead. No thumbless or "suicide" grip here. This may be the same grip you already barbell overhead press with. It's the safer option – especially when lowering the bar.

The bar will start from a dead stop off the floor each time, or just an inch or so off the floor. This will depend on your limb length and preference. Using a barbell will give you plenty of loading options and another useful high-threshold training method to have in your toolbox.

Where to Add It

Although they have much lower complexity than the full Olympic lifts, kneeling snatches still have relatively high complexity compared to most regular exercises. They're also classified as a power-based movement which, for a number of reasons, aren't the best to do when you're already fatigued.

For those reasons, kneeling snatches are best done at the start of your workouts, either as a primer-type movement or as your key lift.

Strengthen your pecs, shoulders, triceps, and core with this exercise. Here's how to do it.
Tips, Training
Eric Bach November 17 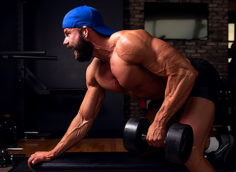 Build muscle and full range-of-motion strength with these exercises for your legs, back, glutes, and biceps.
Training
Nick Tumminello October 29