Single-leg exercises provide tons of benefits, but most people avoid them because they have balance issues and can't use heavy weights. The B-stance, also called the "kickstand" stance, solves that problem.

Using a B-stance to do lower body work is a good example of shifting to single-leg emphasis. Most people who do dumbbell or kettlebell single-leg deadlifts get great isolation of their hamstrings and glutes, but it usually comes at the expense of not being able to find the proper footing or balance and not being able to lift a weight heavy enough to really elicit gains.

A B-stance fixes this problem. Since the other foot is down, albeit lightly, balance is no longer an issue.

Take a careful look at the video, and you'll notice an additional benefit. You'll see that emphasizing the leading leg makes you focus on squat depth and something very important that many lifters lack: dorsiflexion.

To get down deep with flat heels, it's going to require the knee traveling farther forward over the toe, even compared to typical squats. This can make for a stronger knee joint and a healthier ankle complex.

Since you get to use a barbell, consider the energy expenditure needed per set. Sets of 12 per leg aren't the way to go here. Focus on sets of 4-8 reps per leg instead.

This exercise serves two purposes. First, setting up with a single-leg emphasis will attack the posterior chain of the working side in a great way. Having the foot down reduces the propensity to rotate, which is a common problem with single-leg deadlifts.

I like setting up with more of a Romanian deadlift stance (with the leg straighter than it would be for a conventional pull). It helps keep the knee out of the way to promote a vertical bar path.

Note that I'm using a barbell. Even the 95 pounds I'm using strictly for demonstration purposes exceeds the amount of weight I'd typically use with any dumbbell. Sure, kettlebell or dumbbell single-leg deadlifts have their place, but using a staggered stance and a bar is a better way to get strong while still exploiting bilateral imbalances. 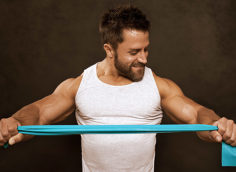 Resistance bands are here to stay, whether used alone or added to your big lifts. Here are the benefits and drawbacks.
Training
Christian Thibaudeau January 13

Fix your technique and turn up the time under tension with this brutal variation.
Squat, Tips, Training
Jay Mendoza May 16