Do the Bench Press with a Slight Incline

To make the bench press more shoulder friendly, ditch the decline and flat setups and use a slight incline.

A slight incline is defined as anywhere from a 10-30 degree inclination of the bench. This is about one notch up on the standard adjustable bench. Don't have anything but a flat bench? No problem, just slide a plate or two under the head of the bench.

Why does this make a difference? Largely, the traditional flat bench press has turned into a semi-decline once the shoulder is placed on the bench with the addition of a lumbar arching. Many lifters have this pattern ingrained, which is fine if you know how to manipulate other variables that help long-term shoulder health. Essentially, we're placing the shoulder back into a neutral position by slightly inclining the bench with the presence of an arch.

As a press is executed from more of a declined angle, the movement tends to close down the anterior shoulder compartment which is home to important contractile tissues such as rotator cuff muscles, the long head of the biceps, and a bunch of vascular structures and nerve bundles. The less open area there is for these structures to freely glide through, the more likely the movement will flare something up and cause pain. Our goal is to open up this compartment as much as possible.

Though the slight incline setup can be used with any tool such as a barbell or Smith machine, start out with dumbbells to allow as many degrees of freedom as possible for increased long term progression. 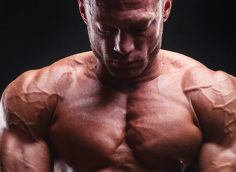 Feel the burn and cap off your delts with this unique exercise. Take a look.
Tips, Training
Paul Carter October 1

Sometimes success involves studying the habits of unsuccessful people and then doing the opposite. Here are five of their bad training habits.
Bodybuilding, Powerlifting & Strength, Training
Charles Staley September 20

Learn how to do the goblet squat with pulse, the anterior loaded barbell step-up, and other movements that will make you monetarily hate life.
Bodybuilding, Powerlifting & Strength, Training
Tony Gentilcore December 6