Everyone who learns to front squat ends up saying, "Why haven't I been doing these!?" The front squat is worth mastering. It trains the core, legs, and glutes like nothing else and increases overall athleticism.

Doing it well reinforces global and positional mobility, because it involves the fingers, wrists, shoulders, spine, hips, and ankles, and it requires that they all express their mobility in a coordinated way. Beneficial, but tough for a lot of lifters.

No matter how experienced you are, you're going to be uncomfortable the first time you try to front squat. Luckily there's a couple drills to help make it more manageable.

1 – The Kneeling Squat and Curl

This exercise will improve mobility in the underarm area while maintaining a healthy squat pattern. Mobility here will help you keep an upright posture during the front squat and keep you from bending over at the waist or dumping the bar.

The problem is, tightness develops quickly in this area from stuff like chins and rows. And it can essentially create a traffic jam headed by three big trucks: the long head of the triceps, the teres major, and the lats. This makes it really hard to keep the elbows high, which in turn makes it hard to keep the chest and spine upright.

Keeping the elbows high while simultaneously performing a proper squat with a neutral spine can be tough with this tightness. That's why some lifters will fold over and exhibit a squat that's very knee-dominant. Not pretty. This drill helps because it requires deep flexion of the hips with good spinal positioning and high elbows.

Do the drill by kneeling and placing the elbows an inch or two off the edge of a bench, holding a dowel. From here, descend back toward the heels while keeping a neutral spine. At the same time, curl the dowel toward your upper back, and actively (but gently) push your chest and shoulders toward the floor.

This movement addresses the biggest beef that lifters have with the front squat, which is that after a time it becomes unbearable for the wrist and fingers to support the load of the bar because of the time they're placed under tension. By the fourth or fifth set, some no longer get the full reward of performing a front squat because the inability to hold onto the bar interferes with technique.

First, kneel in front of a high box (shoulder height or even just slightly above) with the glutes tight. Place your arm in the front squat position and hang a light kettlebell from your fingers. The trick is not to violently flex the fingers and wrap them around the bar entirely, but rather to let them provide just enough support for the kettlebell so that it doesn't fall.

Let the kettlebell sit inside of the upper arm so that the biceps don't get in the way of the stretch. The advantage of the kettlebell is that it carries most of its weight at the bottom and creates a more direct stretch on the wrist and finger flexors.

Hold the stretch for about the length of time it takes to complete a regular training set (20 to 30 seconds). When you're comfortable holding the light kettlebell for that long, progress by increasing the weight of the 'bell. Performing this over two or three cycles of load progression will do wonders for your ability to comfortably hold the front squat position, giving a significant boost in technique.

If it's painful or uncomfortable at the elbow or forearm, try a self-myofascial release on the wrist flexors and extensors, followed by a light stretch. Then follow it up once again by the drill.

The final drill addresses the "bar smashes my Adam's apple" issue. If you feel a slight choke from the bar against the clavicle, that can be made much more manageable when you learn to set the bar properly across the shoulders.

Perform this drill by walking into a squat rack with the arms fully outstretched at shoulder height and the thumbs pointing up. Let the unloaded bar lay across the shoulders and, keeping the arms outstretched, do a set of squats. Higher rep sets will really allow you to get comfortable with this. Increase the load as it feels natural to do so.

Put these three drills together and gradually increase loads for the second and third ones. In a few weeks, your front squat will feel better.

For years, I've been watching zombies, training zombies. They wander aimlessly from station to station, doing exercises haphazardly with really no rhyme or reason except that, "this one kinda' feels like it's doing something." Once in awhile, they'll grasp on to a particular program but they'll end up beating it into the ground, doing it for months and months until they've long since milked any effectiveness from it.
Training
TC Luoma November 17 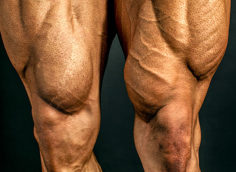 No access to big weights? These banded exercises will get the job done.
Training
Gareth Sapstead December 16

Can you pass this test? Here's exactly how to do it, plus how to get better if you suck.
Metcon, Tips, Training
Eric Bach August 28