Here are three of the most bastardized exercises you'll see in the gym and how to fix them.

Push-ups are a powerhouse exercise for developing your chest, triceps, anterior delts, and core. The movement is a relatively simple one in concept, but in practice, form breaks down in a hurry.

If your chest doesn't touch the floor, you don't fully extend the elbows, you sag at the hips, or snake your body to get back up, you're not doing a correct push-up.

"Chest to floor" is a hard concept for some, but your abdomen is not your chest, and neither is your crotch. Touching the stomach instead of the chest cheats the movement by about six inches of work.

Work is force x distance, so if you're cutting down your distance by sagging at the hips and teabagging the floor instead of keeping the core tight, you aren't really doing as much work.

Your elbows should be tucked into the body so that it looks like you're making an arrow with your head and two hands. Tucking the elbows will keep your shoulder in a more neutral position which will help to prevent shoulder issues down the road.

Pull-ups are one of the best upper-body pulling exercises you can do to increase the strength and size of your upper back, lats, and arms.

Most people cheat by unintentionally kipping or keeping a quarter-bend in the elbows. If you always have a bend in your elbows, you shorten your range of motion and prevent yourself from developing the muscles you're trying to target.

If you can hang from a bar with your elbows straight without pain, there's no reason this shouldn't be your end range of motion when doing the pull-up. Anything short of full extension is not an actual rep.

A proper pull-up begins with the arms straight and ends when your chin goes above the bar. Ideally, you should try to pull your ribcage down so that your core stays nice and tight throughout the movement.

Planks can be used to strengthen your core and create whole body tension if the duration is kept short and the movement is intentional. But they can get ugly pretty quickly.

Letting your hips sag or rise in an attempt to hold a longer plank defeats the purpose.

If you're trying to hold a five-minute plank, you're wasting your time... and probably not even working the correct muscles. Holding a plank for a long duration doesn't mean you have a strong core. It means you're most likely hanging out on the ligaments in your lower back and pelvis and will have back problems later on.

Aim for about 10-20 seconds of contracting your abdomen and squeezing your glutes as hard as you possibly can. This will help with core stiffness and bracing for all your other lifts. If you're a powerlifter, you should think of pushing your core out and bearing down like you're about to get punched in the stomach.

If you're into calisthenics and gymnastic movements, think of pulling your belly button toward your spine so that you achieve a "hollow body" position. 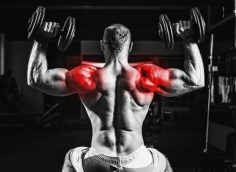 Got shoulder issues? Keep pressing. Just use exercises that keep the pain away. Here they are.
Training
Andrew Coates November 12

The stability ball crunch is a good exercise, but most people screw it up. Here's how to do it right for best results.
Abs, Tips, Training
Nick Tumminello April 11

And a few sets of these to the end of your chest workout as an athletic finisher.
Chest, Exercise Coaching, Tips
Eric Bach January 14 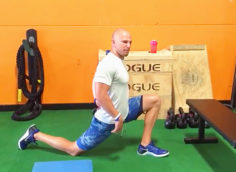 Most lifters have tight hip flexors. Here's how to fix them up.
Exercise Coaching, Mobility, Tips
Dr John Rusin June 13