It doesn't need to be heavy every time, but this basic movement pattern should be loaded in some fashion on a daily basis.

Focus on improving strength, mobility, and proficiency in all squatting and lunging movements. Back squats, front squats, Zercher squats, lunges, tuck jumps, goblet squats, dumbbell or kettlebell front squats and lunges, etc. all have a place.

With the exception of heavy back squats, any other squatting or lunging variation should be done with the weight starting on the floor. Build the legs. They are the base of the body.

If squats build the base of the body, then the hinge builds athletic potential via explosive, strong, powerful hips. Hinge on a daily basis.

Deadlifts, cleans, and snatches are fantastic exercises for building the ability to hinge well. Kettlebell or dumbbell snatches and swings can be done for higher reps on lighter days to build strength endurance, but don't shy away from doing more than three reps per set on the deadlift.

A strong back, well-developed rhomboids, and thick, strong traps are one of the hallmarks of an athletic body.

Strengthen the pull-up. Do them for multiple reps. Add load and become strong in weighted chin-ups. Bring back the classic rope climb. Attach a rope to a sled and drag heavy weight across the horizontal plane.

Dumbbell or kettlebell snatches and rows also build grip strength and assist in upper-back development, which is crucial for many lifts and athletic events. Pull-ups, rope climbs, and weighted chin-ups should make up the bulk of back and biceps training.

Most athletes don't need to press as heavily, or as often, as they pull. But all types of pressing can play a part.

If you pick a pressing variation that's psychologically stimulating and physiologically compatible with your body, settle in and improve that particular press, whether it's bench press, overhead press, push press, the single-arm press, dumbbell press, etc.

And remember, there has never been an athlete that has outgrown push-ups and dips. Do them.

Athletes, especially combat athletes who include loaded carries frequently in training, improve their ability to take an impact and deliver one. Include any variation of loaded carries a few times a week. Doing it every single day in some variation wouldn't hurt either.

Train with intensity. Train long. Train hard. Overcome the mental barriers and self-imposed limitations. Train in the cold. Train in the rain. Get uncomfortable. There aren't very many truly strong or fit people in the world. There are even fewer who are strong, fit, and tough.

The athletic world has been ravaged by diet cults and fads. Use common-sense nutrition principles and eat according to your physical development goals.

If you think of yourself as an athlete, then run. The wrestler, linebacker, midfielder, boxer, and bodybuilder should all run. Run sprints, distances, and steep hills. Run through the mountains.

Running fast is primal and exciting. Do it in ways compatible with performance goals, but don't make up excuses or believe the contemporary pseudoscience about why running is bad for you. Heart attacks, cigarettes, and cocaine are bad for you. Running and sprinting are not.

An athlete endowed with talent, forged by hard work, and blessed with success should spend time passing the torch. Don't be selfish.

10. And remember this: Uncommon effort will yield uncommon results

This is really going to burn, but you'll love the results. Here's how to do it.
Tips, Training
Paul Carter January 5 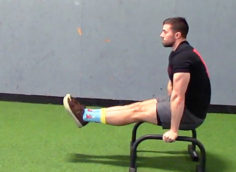 Those guys who think planks and Bosu Ball triceps kickbacks are giving their core a good workout are poor, pathetic slobs. If you really want to work the core, you've got to raise the weight over your head.
Training
T Nation December 27

The first rule of fixing your bench press is admitting your bench sucks. The second rule is that you must read this article and learn about the set-up, grip, ascent, and descent.
Bench Press, Powerlifting & Strength, Training
Jim Wendler December 4