Most lifters assume the deadlift and squat are enough to build their hamstrings, but that's only one small portion of what's needed to make them jacked.

Addressing limitations is critical to consistent improvement in maximal strength and also for strength endurance. So if you're not considering where you're weakest, now's the time to start.

Both closed chain (think RDL) and open-chain settings (think hamstring curl variations) should be part of your routine. Both are covered here. Start applying these to your lower-body workouts and see results in as little as four weeks.

This is the GHR (glute-ham raise), and you'd be hard-pressed to find a better variation to crush your hamstrings than it – aside from the inverse leg curl (below) – but most gyms simply don't offer that level of equipment.

Fortunately, most CrossFit boxes do have glute-ham raises. This certainly isn't a beginner variation, so check out the full video for some great scaling options.

If you're fortunate enough to have access to an inverse leg curl, think of it as a progression from the GHR.

General programming: Add either movement to your leg workout by accumulating 30-50 reps with varying levels of resistance.

The Sled Pull with Straps Between Legs

The best part of using the sled is that it requires almost zero skill. If you know how to walk, you'll be good to go. Load the sled heavy while still being forceful on every step.

The Sumo RDL with Band

While the sumo RDL is a proven exercise, you can adjust it by using reactive neuromuscular training (RNT). You'll notice that the bands are pulling forward. This is going to force you to dial in a solid position and engage the anterior core and posterior chain to even greater extent. You can do this with a conventional or sumo stance.

Using reverse bands, or as Westside calls it, "the future method," is an incredibly powerful tool to alter loading through range of motion. The bands unload at the top of the movement, allowing you to work with heavier loads than normal.

The landmine can satisfy just about any training need, so it's no surprise we're able to train the hamstrings quite effectively with this exercise. If you're looking to complement your training with an unsupported variation, this is it. Unlike the supported RDL, the goal here is to work with lighter loads in higher-rep strength endurance settings.

No ham-building list would be complete without a band variation to improve the quality of tendons and their elastic abilities. The purpose of band work is mainly for injury prevention. Usually this will be done as high-rep finisher.

Higher-rep deadlifts are an effective tool, but are often used haphazardly where people will sacrifice their lumbar spine for loading/cycle rate. Take a look at just about any CrossFit competitor performing high-rep deadlifts in a conditioning setting and you'll be hard-pressed to find a neutral spine.

With the trap bar, the weight is positioned closer to the center of your mass, creating a different joint angle or gravity line allowing you to train bilaterally with less risk of mechanical breakdown. For most though, I'd recommend first pulling from a 2-4 inch elevated surface (like plates) for at least a few sessions.

We've gone through the box squat more than a few times and it's been the topic of debate for years. We've covered it before, but if you're ready to implement the box squat it can be done a few ways.

You'll want to use a height that puts you at parallel or slightly higher to ensure the movement remains hip dominant. And you'll need to watch the full video demo to make sure you don't miss some of the key points. If you're still learning to box squat, stick with a submaximal effort or dynamic effort method before attempting a max effort.

All of the programming recommendations aren't set in stone, so feel free to work in your own methods like max effort training, submaximal effort, repetition effort, strength-endurance, general strength work, as well as dynamic effort training. 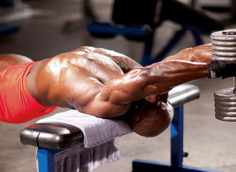 Back in the “Golden Age of Bodybuilding,” guys performed the now-forgotten pullover to build their upper bodies. Who says you can't go back?
Back, Bodybuilding, Training
Chris Colucci February 21 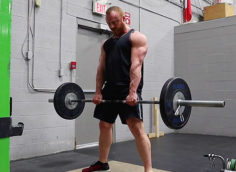