This training article's a little unusual in that it addresses movements for areas of the body that aren't' typically associated with each other. While it's quite common to see an article about training the glutes and hamstrings, or an article about calf training, very few authors try to combine the two. Why, it's almost like going to a restaurant that serves Mexican food and, I don't know, Irish food.

Nevertheless, writer John Paul Catanzaro has combined glute training and calf training in the same article and damned if it didn't work. Of course, the exercises described are more related by the way they're done rather than sharing any geographical proximity, so the combination isn't all that strange.

Anyhow, let's start with an exercise you hear a lot about, but seldom see explained in detail–the reverse hyper.

If you want to increase your strength, speed, power, reaction time and add some muscle mass, this is the exercise. The reverse hyper was popularized by Louie Simmons, who has produced some of the strongest powerlifters in the world at his Westside Barbell Club. This exercise thoroughly stresses the posterior chain of muscles (erectors, glutes and hams).

Some strength authorities believe the reverse hyper has greater specificity to sport with respect to hip extension than other popular exercises such as the Romanian deadlift. For instance, strength coach Kim Goss feels the reverse hyper is an excellent assistance exercise that doesn't compromise technique on the Olympic lifts. It's an effective exercise that can be used by many athletes to improve their performance.

You can perform the reverse hyper on a dedicated reverse hyper machine (refer to Dave Tate's site for more info) or simply perform them on a regular back extension machine by positioning yourself backward. I've even had clients do it over a high counter or bench. Just make sure that you have something sturdy to hold on to. It can even be performed over a large Swiss ball, but use a Swiss ball only if you don't have access to a reverse hyper or back extension machine (or even a high bench for that matter!)

Unfortunately, the ball tends to absorb and dissipate some of the force from the working muscles as well as shift too much stress onto the shoulder stabilizers. This detracts emphasis from the hip extensors. Furthermore, in order to carry out the vital ballistic recoil action during this exercise, the legs should be able to swing right underneath the body to effectively prestretch the hip extensors. Thus, the Swiss ball is useful only for fairly slow, limited range hip extension movements.

A Swiss ball is great for rehabilitation, however. Typically, the tempo can be slow and controlled, favoring isometrics if the aim is rehab. Perform two to three sets of 10 to 12 reps with a static hold of 5 to 10 seconds at the top. Keep the rest intervals fairly short (up to a minute) and don't increase the load (i.e. by using ankle weights, or a dumbbell or medicine ball between the feet) until you're able to complete 12 reps with 10 second isometrics (which equals 120 seconds or 2 minutes time-under-tension.)

This exercise is considered quite safe since it encourages a natural concave (as viewed posteriorly) lumbar curve at the point of greatest overload. By reducing the lever arm and bending the legs, greater emphasis is placed on the glutes. Allow this only if the individual is unable to keep his legs straight. A progression would then be to straighten out the legs over time. In fact, many physical therapists use a simple test of palpating the hams and glutes while performing hip extensions (essentially the reverse hyper.) If the hamstrings contract first and the knee subsequently bends, there's generally weakness in the glutes. 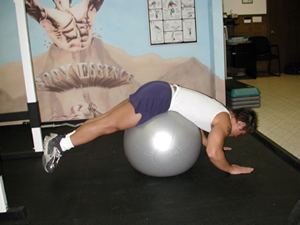 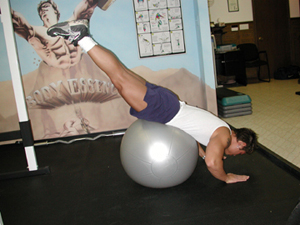 Or, you can do it the way Dr. Mel Siff taught me-explosively! In this approach, your feet should be free to swing under the bench to offer different levels of prestretch. As mentioned above, you can't statically or dynamically prestretch the hip flexors while lying prone over a Swiss ball, so choose the appropriate equipment for this version. Take advantage of the plyometric effect!

Here you'll utilize the concept of compensatory acceleration training (or CAT for short) as coined by Dr. Fred Hatfield, the first man to officially squat over a thousand pounds. By deliberately accelerating through the concentric range (the essence of CAT), you'll increase muscle tension. On the way down, you can resist the action, thereby adding a decelerative eccentric component to the training. 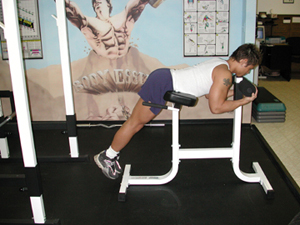 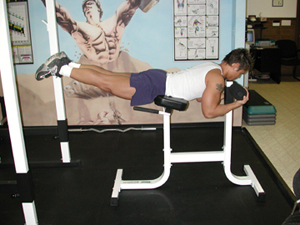 Tudor Bompa suggests three to five sets of four to eight reps with a two to four minute rest interval for maximum power development. But you'll experience strength and hypertrophy gains as well. Start off with a light weight (or even no weight at all) and concentrate more on speed than strength. Remember, Newton's Second Law states that force equals mass times acceleration. Therefore, concentrate more on the speed (i.e. acceleration component) and less on the load to increase force!

So, if you wish to rehab your back, run faster or just have a purdy backside, then try the explosive reverse hyper.

This is another beauty inspired by Dr. Mel Siff. This version will allow for a stronger contraction of the gastrocs. Please, only attempt this exercise if you drive a car with automatic transmission. You've been warned!

First, a little anatomy. By now, everyone is aware that the soleus is primarily composed of slow-twitch (ST) fibers and the gastrocnemius is made up of mainly fast-twitch (FT) fibers. Other muscles are also involved in the calf raise (i.e. plantaris, tibialis posterior, flexor digitorum longus, and flexor hallucis longus).

It's the FT fibers that have the greatest capacity for the three S's: size, strength and speed. They have the least capacity for endurance, however. Also, since the gastrocs are so far away from the heart and have only one major blood supply (the sural artery), they tend to fatigue quickly as metabolic byproducts accumulate. This is the reason why calves are notorious for cramping.

So, let's take a look at all these factors. For strength development in these FT fibers, high loads are necessary, but these loads should be moved at high speeds to garner their full potential. Since you're working at such high intensities (loads) and the capacity for endurance is low, don't perform high reps. Instead, do enough sets of lower repetitions to gain adequate size (hypertrophy).

Next, let's review some biomechanics. The soleus crosses only one joint – the ankle. That's it! Therefore, it's primarily stressed with the knees bent (as in a seated calf raise). Nothing new here. However, the gastrocnemius is a biarticular muscle meaning that it crosses two joints – the ankle and the knee. It's primarily stressed with the knees locked (as in standing calf raises). Again, nothing foreign here.

But, have you noticed that when you're doing a standing calf raise, you can lift more weight by bending your knees slightly? This reflexive action usually occurs near the end of a set as you fatigue. It's a natural way to perform a greater amount of work by eliciting an effective prestretch in the gastrocs (through the concurrent action of ankle dorsiflexion and knee flexion) and calling upon other muscles (i.e. hamstrings) to help out. Some call it cheating; we'll call it "controlled ballistic action" in the context of this article. If you're not convinced, here's an excerpt from the book Facts and Fallacies of Fitness by Dr. Siff that explains this phenomenon further:

"Try performing jumps on the spot with knees kept straight versus jumps which allow knee flexion. The fact that the latter permits you to reach a much greater height shows that bent knee action allows you to produce greater driving force, which in turn offers better conditions for calf development."

Okay, let's try it then. Position yourself under the pads of a standing calf raise machine and lift the weight. The pads should be set low enough so that when you lower the weight to a full stretch position, the plates do not touch.

Positioning of the feet will influence the line of pull in the calf raise. Rotate the feet out and you stress more of the medial (inner) head. Rotate the feet in and a greater emphasis is placed on the lateral (outer) head. Here's another trick to add to your arsenal of training info. Keep your feet straight (about hip-width apart) and roll over your big toe to emphasize the medial head or over your little toe to hit the lateral head. So, with just a few small adjustments, you can customize this exercise to "fill in the gaps." 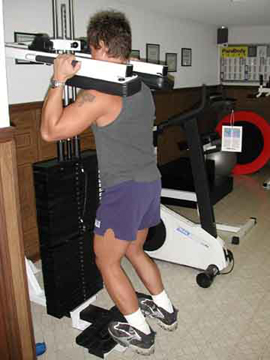 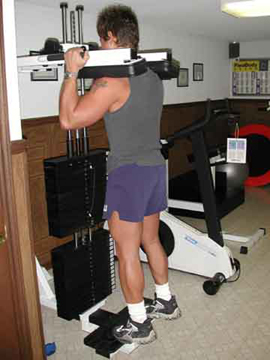 On the concentric (lifting) contraction, it's important to a) bend the knees slightly to create a prestretch or a spring-like hydraulic action to generate a great amount of force, and b) explode the weight up as fast as you can to activate as many motor units as possible. On the eccentric or lowering part of the movement, a) the legs will extend at the top of the movement so keep them straight all the way down, and b) go slow on the way down. Since you only recruit about half the fibers on the stronger eccentric contraction, the tension is actually double. This will induce some viscious microtrauma and encourage growth.

I recommend a heavy weight. Start with a load that's at least 20% greater than what you would use if you were doing a 4RM set with the legs straight throughout. If your machine doesn't have enough weight, do the exercise unilaterally, meaning one leg at a time. Remember to start with your weak leg first if you use that method. Use four to six sets of 4 to 6 reps. The tempo is crucial. The positive contraction must be explosive. I mean put the machine through the ceiling!

The negative contraction must be slow and controlled. A 41X1 tempo* will dissipate some of the plyometric effect between contractions. An alternative would be no rest whatsoever between contractions (40X0), which will allow for even greater weight to be used. Take at least three to five minutes rest in-between sets. Some people like to throw some ab work in between sets.

To get a truly intense workout, another alternative is to perform descending sets. Perform two to four reps and immediately drop the weight by about 10%. (Depending on your fiber type, you may need to adjust this percentage. Just try to achieve the same amount of reps, i.e., stay within the 2 to 4 rep bracket with each drop.) Rest only long enough to change the weight and then go again.

Repeat this process two to three times and make sure to take a minimum of three minutes rest before performing another set. This should give you just enough time to complete your "rain dance" (you'll know what I mean once you try it!).

I recommend a total of three sets every four or five days for optimum results. Hot bathes with epsom salts and some light stretching may be in order to deal with the subsequent soreness.

And please, no hate mail.

Wake up your upper back, shoulder stabilizers, and more with this simple warm-up exercise.
Mobility, Tips, Training
Eirik Sandvik May 14

Do this before your regular deadlift session and you'll perform better. Or just do it for bigger, stronger traps and lats. Here's how.
Exercise Coaching, Tips
Christian Thibaudeau January 29

Stubborn rear delts? Punish them until they grow with this 100 rep drop set. Use partials at first, then full range on the last drop.
Bodybuilding, Exercise Coaching, Shoulders, Tips
John Meadows March 1