Regular Push-Ups Are For the Weak

The standard push-up is an effective movement, if you're weak. The structure of the movement, and the fact that your scapulas are free to move instead of being smashed against a bench, makes it a safer and mechanically correct exercise compared to the bench press.

But past the beginner stage, conventional push-ups by themselves aren't hard enough to really help you add muscle. And most people don't do proper push-ups. They cut their range of motion by stopping with the chest about two inches from the floor. This dramatically decreases chest activation.

People will also cheat by not keeping the body in a straight line. They let their hips sag down which changes the angle of the torso in relation to the weight placement. This makes the movement easier, but less effective. But one "new" push-up variation takes care of all these issues. 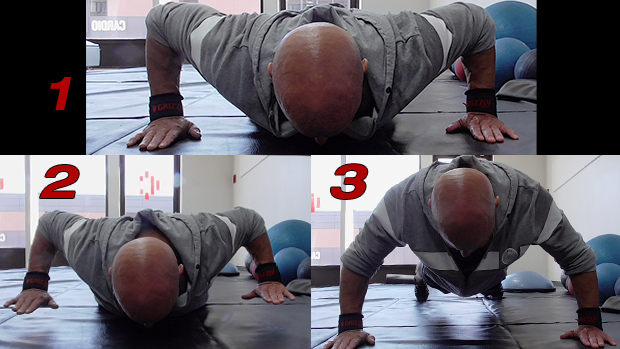 It's called a "hand release" push-up. And though it's probably been around for a long time, it's gained popularity through CrossFit. They needed a way to standardize push-ups for competitions to keep people from cheating the movement.

How do you judge push-up depth when dozens of reps are supposed to be done in 30 seconds? The answer was simple: have each push-up start with the body (chest, abdomen, and quads) resting on the floor, and the hands completely off it. This solved the range of motion issue.

But it didn't quite solve the cheating part. You can raise the chest first, then the hips. This makes the exercise much less effective for building muscle, so you'll have to be disciplined and keep your hips up.

A proper hand release push-up will give you a much stronger pectoral contraction than a regular push-up. You'll see why in a sec, but first get up and give them a shot.

How To Do Hand Release Push-Ups

Why These Are Better at Building Muscle

Think You're Too Strong?

In a push-up, hand release or regular, you have to lift 60-65% of your body weight. So if you're 180 pounds you're pressing between 110 and 120 pounds. This can be fairly light if you're remotely decent at any horizontal press. So if you can bench 265 pounds, then your push-up will be 45% of your max – not hard. Of course the hand release will make it a bit tougher, but it's still fairly light.

How To Make It More Challenging

Simple Can Be Effective

We tend to avoid some very effective exercises because we think of them as not advanced enough. Push-ups feel like a gym class exercise, not like training. But that's a flawed way of thinking. The body doesn't know where the resistance is coming from: machine, free weights, a sandbag, your body, or the corpse in your trunk.

All it knows is which muscle needs to tense up and how hard. If you find a way to make the reps challenging, the hand release push-up can build just as much muscle as any other pec exercise, and it might even help you better recruit your chest in the future.

When should you use tempo training and why? Mike Robertson answers these and other questions about this often-neglected component of strength and muscle building.
Bodybuilding, Training
Mike Robertson January 26

If your gains have stalled, it's probably because you're missing one thing in your workouts: volume. Here's how to intelligently add it.
Bodybuilding, Powerlifting & Strength, Training
Adam Fisher March 10

Notice a pinching sensation when you squat? Not good. Here are 5 ways to fix the problem.
It Hurts Fix It, Tips, Training
Dr Michael Mash January 22
An Interview with Dr. Ken Kinakin
Training
Chris Shugart September 14