Get Big with the Fewest Number of Exercises

What's the minimum number of exercises you can use and still gain size? What would those movements be?

My answer used to be four: bench, squat, deadlift, and row. A few years later I found out that you can actually build a fairly complete physique with three moves: a high pull, bench press, and squat or deadlift variation.

Can we do it with less than three? Pavel Tsatsouline used to recommend only two, the deadlift and floor press. But Pavel is more about relative strength: getting stronger without putting on much muscle mass. Heck, I believe you can build great all-around relative strength with only one exercise: the power clean and push press. (Okay, it's two lifts blended together, but you get the idea.) But maximum muscle mass? No way!

But after experimenting, I've come to the conclusion that you can get jacked using only two exercises. Don't get me wrong: you won't build a national level bodybuilding physique, but you can become thick, muscular, strong, and powerful looking from using the right two exercises.

Exercises That Don't Quite Cover It

Which exercises would I choose now? Well, the combination of both exercises should lead to a decent level of stimulation for pretty much all the muscles in your body. Understand that you can't maximize everything, but if you make the right choices you can get growth everywhere.

You'd want the exercise combination to give you that thick and powerful look. And to do so, it must respect the Carter principle: Traps are the new abs. You can't look powerful without thick traps.

So naturally, your mind might go to these combos:

The Best Two Lifts For Hypertrophy

I'd go with the bench press and Zercher squat (where you hold the bar in the crooks of your elbows). This combination will give you the best overall development with the least amount of invested time. Here's why:

Even if you're not ready to pare down your training to two lifts, you should still consider doing these. If you're already doing them, are you doing them right and getting as much out of each as possible? Let's take a look.

"Zercher" just means that the bar is held in the crooks of the elbows and the arms are flexed to prevent it from dropping. There are two main ways to hold a Zercher lift: connected and unconnected.

Since we still want to maintain an elbow width that's about shoulder width, the shoulders will be internally rotated to allow the hands to connect. This variation is considered stronger because it makes it easier to hold the bar solidly close to you and prevent the arms from opening up.

The upside is that if your arms or upper body are holding you back in regard to how much weight you can lift, it'll allow you to use more weight than with the unconnected version. I sometimes use the connected grip when going for a personal best and I feel the bar slipping.

The downside is the internally-rotated position at the shoulder, as well as the reduced load on the biceps. So it might make it less effective to build your upper body as well as put more stress on the shoulder joint. The connected variation also favors rounding up the upper back when squatting, which we don't want.

The unconnected grip increases loading of the upper back and arms. The downside is that you might have to use less weight if your upper body is too weak to hold the load properly. In most cases I recommend the unconnected grip since it makes the movement a bit more complete.

What I like with the Zercher squat is that it helps long-limbed lifters to shift a lot of the load on the quads. The grip forces you to stay fairly upright and the position of the load (more forward) also seems to help keep an optimal position, much like in a front squat or goblet squat.

Use the same squatting style you normally use. If you squat with a wider stance, do the same thing with Zerchers. If you prefer a narrower stance, use it on the Zercher too. Some people break at the hips firsts, others at the knees. I recommend using the approach that you're more comfortable with.

Once you become comfortable with the Zercher position, you should be able to Zercher squat around the same weight as you front squat. It could be a bit more or less depending on upper body and core strength.

The bench press is a staple so I don't need to explain it as much as the Zercher squat. However, one point to emphasize is that you should make the bench press a whole-body lift, not just a chest/triceps/delts lift. This is important for performance and safety, but with a minimalist program it takes a whole new level of importance: since we're only doing two lifts we must milk them for all that they're worth!

Here are the key points to turn the bench press into a whole body effort:

The hard part of the exercise isn't actually lifting the barbell; it's maintaining whole-body tightness. That should be your main focus.

Frequency is king. Hitting either a muscle or lift frequently, while still being able to recover, is one of the best tools for rapid progression.

For strength gains, a higher frequency is almost a necessity. That's why Olympic lifters train their lifts 4-6 days a week, sometimes several times a day, and why more and more powerlifters are training the competition lifts several times a week.

Applying strength to a barbell is a motor skill. You must recruit a lot of muscle fibers, make them fire at a fast rate, and make them work together. Then all the muscles involved must continue to work in a coordinated matter. Frequency, not quantity, is the most important factor in motor learning. By training a lift frequently you'll optimize technique and coordination (intramuscular and intermuscular). And by lifting in the 80% plus zone often, you'll become more efficient at recruiting the high threshold motor units as well as making them fire fast (producing more force).

A good real life example is when I took my snatch-grip high pull from 120kg to 180kg in 3 weeks by doing only high pulls (and some bench once a week to stay sane) 6 days a week.

While the importance of frequency is well established, its impact on muscle growth isn't. After all, pro bodybuilders are for the most part training each muscle once a week. Well, brace yourself for this shocker: pretty much all pro-bodybuilders use performance-enhancing drugs.

While I believe that a higher frequency of training will still be beneficial for the enhanced individual, it becomes pretty much mandatory for the natural lifter if he or she wants to maximize muscle growth.

Dr. Brad Schoenfeld has shown in his research that training a muscle more often leads to more hypertrophy. Twice a week is better than once, and strong evidence shows three times a week is more effective than twice. He even goes as far as saying that for advanced athletes, more than three might even work better!

And no, you can't compensate the lack of frequency by an increase in volume if you're natural. Why? Because you can only build so much muscle. How much muscle you can build in response to one bout of exercise is highly dependant on your natural physiology, which is limited.

To increase the total amount of protein synthesis, you have no choice but to look to frequency, not volume. Especially if you're natural.

This is as barebones as it can be: only do the Zercher squat and bench press, BUT do them 4 days a week. On each day use a different method:

Work on increasing the demands during the eccentric (lowering) phase of the movement. The weekly progression is:

On this day add an isometric component (a pause) during the lift. Each week change the position or duration of the pause. Ideally, stay close to the same weight from week to week.

Here the goal is to complete as many reps as possible with a percentage of the week's max effort.

Can I Add Other Exercises to the Program?

Yes, although the main benefit of this program is its minimalist nature, requiring a lot less training time. But you can use the base program as the foundation for a more typical plan.

Here's the thing though: frequency and volume are inversely proportional. If frequency is high, volume can't be high too. The best way to screw up this plan is to add too much assistance work or add exercises that place too much stress on the body.

As such, here are the three things you can add:

You can change things around pretty often but there's one rule to stick to: the "added stuff" should not last longer than 20 minutes. That will prevent any excess that would mess up the program.

Here's an example of what a week could look like:

The assistance work shown is only an example. You can be pretty creative with it as long as you respect the 20-minute rule and use the three recommended types of exercises. Once in a while, throwing in an isolation exercise with weights is fine.

This is a solid workout for those wanting to get strong and build muscle with minimal time. It'll also make you look like a bad-ass in the gym. It's a good plan for people who do a lot of training outside the gym but still need to get stronger with minimal impact on their recovery, like MMA athletes.

We bet you haven't tried these unique exercises. Add a few to the end of your workouts to cure PFS – Puny Forearm Syndrome.
Arms, Tips, Training
Darren Nuzzo April 12 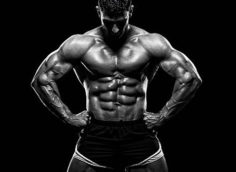