When Johnny Weismuller – the first screen Tarzan – first swung across movie theater screens, he was considered to be very muscular. Kids all over the country beat their chests, bellowed their Tarzan cries, and dreamed of building up their arms to look like the apeman's. Too bad his upper arm measurement was a paltry 15 inches in circumference.

Personally, I remember as a kid watching Charles Bronson in a movie called "Cold Sweat." He wore a T-shirt that would've even been tight on Woody Allen, and I remember being awestruck by his muscularity. Now, when I think about that movie, I realize that his arms were probably about 11 or 12 inches around. Nowadays, even six-year-old kids know that a big arm has to be at least 20 inches.

Bodybuilders have always been obsessed with arm size, but even the general public seems to recognize an impressive pair of guns when they see them, and maybe it has something to do with those old movies that we used to watch. I mean, most people wouldn't recognize a well-developed chest or pair of legs if they were on anyone else other than Marilyn Monroe, Raquel Welch, or the girl next-door who tanned in that little bikini that we could just barely see if we crawled under the hedges and peeked through the little knothole in the fence.

Somehow, arm measurement commands respect. I remember meeting with the Mighty Ducks hockey team and, although some of the players were attentive to what I had to say, others obviously weren't impressed. It wasn't until one of them asked me to show my biceps that they all started listening. After that, I attained immediate status among them, and many of them practically asked me to move in with them and/or date their sisters.

Maybe it's because of the obsession with arm measurement that so many bodybuilders flat-out lie about them. Most arm measurements in the bodybuilding world are so exaggerated, they make Wilt Chamberlain's claims about his sexual conquests seem kind of tame.

If you look at most Weider publications, 20-inch arms are within the grasp of just about anybody who can afford his supplements, and 22-inch arms are about a dime a dozen in the IFBB pro circuit. However, take it from me – this is far from the truth. As the old saying goes, don't piss on my leg and tell me that it's raining.

One of the first authors to tell the truth about bodybuilding measurements was Nautilus inventor Arthur Jones. He published the real arm measurements of elite bodybuilders like Casey Viator, Mike Mentzer, Sergio Oliva, and Arnold Schwarzenegger.

In "The Nautilus Book, Volume II," Jones recounts that the most muscular arm he ever measured was that of Sergio Oliva. At 20-1/8 inches, Sergio's arms literally dwarfed his head, making him appear the target of some weird, voodoo curse. However, the book was published in the early '70s. Since then, the average bodybuilder has "evolved" considerably, mostly thanks to improvements in nutrition, training methodologies, and – how shall I put it? – "recuperative" methods which come in little bottles that are sold by guys in trench coats and named Guido.

The human body is a finely-tuned machine that will only allow for a certain amount of asymmetry. Therefore, if you devote your training energies solely to building big arms, you'd eventually reach a point of total stagnation because you weren't training your legs. In other words, no wheels, no wings! Furthermore, if arms grew without some sort of concurrent development in the legs, most bodybuilders would have to walk on their hands.

There are some interesting correlations and relationships when you compare bodybuilders' heights, weights, and arm measurements. For instance, a 5'7" tall bodybuilder who weighs 214 pounds and has a bodyfat percentage of 8% should have arm development between 19-1/4 and 19-5/8 inches. Yet many of these same individuals will claim to have arms that are over 21 inches, a measurement that's quite rare, regardless of height and bodyweight.

I've personally measured the arms of the hulking individuals listed below. All of them had placed in the top eight of a recent show, and the measurements were taken about ten days after the show, presumably when they were at their biggest from all of the post-competition carbs ingested.

If I published pictures of these bodybuilders, you'd see that Bodybuilders A and D were famous for their leg development, while Bodybuilders B and C sported larger arms in relation to their lower bodies, which were still quite well-developed by any standard.

Let's say that you weigh 176 pounds and stand 5'8" tall. Assuming that your bodyfat is below 10%, your arm should measure roughly 16 inches. If you've calculated it to be 20 inches, you've probably done one of the following things:

If you've done none of these things and still insist that your guns are 20 inches or bigger, you'd better start walking on your hands – your symmetry is bizarre, at best, and such big arms must create an enormous amount of stress on your traps and spine!

Anyhow, the Olympian who keeps bragging about his arms having been over 22 inches (in fact, I think that he may have won an Olympia, or maybe two, or seven) is, in fact, pissing mighty rivers down your leg and insisting that the mother of all rain storms is upon you. At 6'1" tall, this Olympian would have had to weigh about 308 pounds for his arms to be even close to 22 inches around. However, his competition weight was roughly 235 pounds. Of course, maybe his bodyfat was minus 15%...

When you first started lifting weights, no doubt your initial goal was to fill up the sleeve of your T-shirt so that when the wind blew, all of that flapping cloth wouldn't inadvertently signal fighter planes to take off. As you grew more experienced, you probably set some concrete goals for yourself.

Traditionally, there have been three different methods for estimating arm growth potential. The first two are wrong:

For example, if I applied this theory to my own arm development, my arms should never have grown to their present size. Obviously, they did. But it shouldn't have been possible, given my wrist measurement. If I'd taken this advice seriously, I would've psychologically sabotaged my arm development. If I believed that it was limited to a certain amount, based on this silly equation, my arms probably would've stopped growing long ago.

Some authors would say that a realistic goal of arm development is ten inches over your wrist measurement. Again, had I taken this advice to heart, it would've given me an arm measurement of 17 inches, again shortchanging my potential.

Genetic factors play a big part in arm potential. If you come from a family whose members all resemble comedian JJ Walker, chances are that you'll never really have arms that serve as shade for small forest animals.

Regardless of your particular genetic limitation (if you have any), don't simply resign yourself to fate and accept that you'll never have big arms. Anyone, with the proper knowledge in hand, can expect to gain a significant amount of overall muscle – and that, of course, will translate into arm mass.

If you're really going to get serious about developing your arms, you should periodically take measurements to allow you to gauge your progress. For instance, you should definitely take some measurements before you begin a serious arm-training program.

To be accurate, always take your arm measurements "cold" or, in other words, in an unpumped condition. Furthermore, always measure your arms at the same time of day, and in the same state of hydration. It may be initially damaging to your ego, but perhaps that will give you the added impetus to train harder.

The most accurate measurements are done with a flexible steel tape attached to a tension measuring device. Kinesiologists call this a Gullick tape. It allows you to always take measurements with the same degree of tension on the tape, ensuring that your measurements are accurate and not influenced by wishful thinking.

It's also a good idea to let someone else take the measurement for you so that you're not tempted to stick a finger under the tape.

To take accurate measurements, position your upper arm so that it's parallel to the floor, with the elbow pointing directly ahead of you. Measure the arm at its greatest girth, which should be at the peak of the biceps. Make sure that the "circle" formed by the tape is perpendicular to the ground.

As far as the frequency of measurements, some bodybuilders are so compulsive that they measure their arms every morning. Take my word for it, that method will only lead to anxiety. Arms don't grow on a linear basis – rather, they grow in spurts.

I remember having a conversation with a bodybuilder who was obsessed with improving his pitiful calves which, truthfully, would've looked more at home on a pigeon. As a result, he measured them five times a day. He asked me if I thought that he was too compulsive. I assured him that he wasn't but, at the same time, I cautiously suggested that he double his intake of St. John's Wort and invest in a straitjacket. Similarly, measuring your arms every day will only drive you and everyone around you insane.

Although measurements may seem like an exercise in vanity, they provide a good yardstick (or, in this case, tape measure) of progress and may help spur on your training. 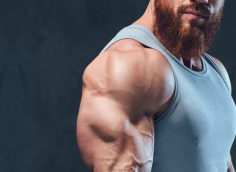