The triple progression system is one of the most effective ways to manage your training progression. It’s based on the principle of base-building: First you’ll “own” a specific weight by increasing the number of sets and reps you can perform with it. After that, you’ve “earned” the right to increase the load.

This idea makes intuitive sense, but many lifters seem oblivious of it when you look at their training. I’ve been aware of the triple progression concept since the early ’90’s, but I’d lost track of the idea until coach Mark Reifkind reminded me of it. Let’s take a closer look at the three progressions in order to get a better feel for this great system.

The First Progression – Hit Your Goal Number of Sets

The first step of triple progression is to hit a goal number of work sets for the exercise in question. There’s no exact number of sets (that depends on everything from training goal to how much time you’ve got available for training), but let’s set a working-set goal of 5 as an example.

If you’re currently doing 3-4 work sets for a given exercise, step one is to increase that to 5 sets, even if you have to reduce the weight you normally use in order to do it.

So if during your last dumbbell bench press session you used 85-pound dumbbells for 4×8, next time out you’ll do 5 sets, even if you lose a rep or two on the last set or so. Here’s how that might look:

At this stage, you’ll have completed step number one: establishing a goal number of work sets.

The Second Progression – Hit Your Goal Number of Reps

Now that you’ve completed the desired number of work sets, step two is to hit a pre-defined number of reps for each work set, regardless of how many workouts it takes to do so. I’ll choose 10 reps as that target for our example, and let’s assume it takes you 4 workouts to complete 5×10 with 85-pound dumbbells. Those 4 workouts will probably look something like this:

At this stage, you’ve successfully climbed the first two steps of the three-step ladder, and in the process stimulated some solid hypertrophy and built some enhanced work capacity, not to mention earning some confidence and something very important yet poorly-appreciated: technical mastery.

Mastery can be defined in different ways, but you shouldn’t progress to step 3 until you can hit 5×10 with complete precision and authority – every rep is performed without taking shortcuts such as reducing ROM (range of motion) or other forms of technical errors.

Patience is key here. If, on the fourth workout, you barely eked out 5×10 with the 85’s, do yourself a favor and repeat that same workout next time out, with the goal of completing it with a bit of authority and “margin.” Once you’ve achieved this, it’s time for step number 3.

Now, and only now, do you increase the weight, and you’ll increase it by the smallest margin possible. In the case of the dumbbell bench press, you’ll perform your next session with the 90-pound dumbbells. And, as you can probably imagine, this additional weight will knock you down a peg or two in terms of reps. This being the case, your next workout might look like this:

In other words, the load increase has knocked you back down to step 2. Your next training goal is to build yourself back to 5×10 with the 90’s and then rinse and repeat. 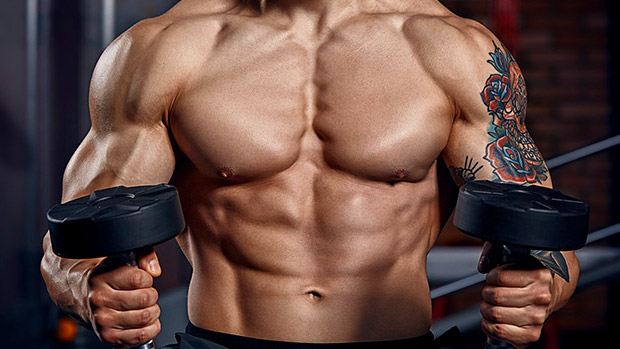 Build The Base And The Peak Takes Care Of Itself

I’m hoping you’ve noticed something about this method of training: During the early stages, you’re escalating volume as you build up your reps and sets. This promotes size gains and work capacity, which sets the stage for strength acquisition later in the cycle.

As it turns out, triple progression is an “organic” form of linear periodization – you’ll constantly rotate between hypertrophy and strength phases over time. This constantly-shifting volume/intensity relationship also helps to offset adaptive resistance to monotonous loading over time.

Get Your Rep Goal Right

Regarding the number of reps per set, this is determined mostly according to training goal:

In terms of the number of work sets per exercise, I’d suggest anywhere between 3-5, but it’s generally not wise to use an aggressive progression scheme such as this one for all exercises simultaneously.

Instead, select 2-4 key exercises for triple progression, and place everything else on “maintenance” status, using a less structured, less aggressive format as you focus your energies on those 2-4 targeted movements. Later on, you can rotate the emphasis as you see fit.

The System Is Your Coach

Triple progression will make you acutely aware of your recovery status and in turn, will encourage you to optimize your sleep, nutrition, stress levels, and anything else that might negatively affect your upcoming workouts.

Imagine that during your last workout you just missed getting 5×10 on military presses using 135 pounds. You hit 4 sets of 10, but only managed 9 reps on your final set.

Now your objective for your next pressing workout is crystal clear – you’ve got to come in just a bit stronger so you can hit 10 reps on that final set, but how? This is the question that will prompt some serious self-reflection about what you need to do better.

In this way, the triple progression method becomes, in a sense, your coach. If last week you did 225 for 10,10,10,9, and 9, and this week you hit 5×10, you know your training is working. Without a formalized progression strategy, however, you won’t have the same level of accountability.

But if you do care about progress and accountability, consider using triple progression. You’ll be pleasantly surprised at the gains you can make when you make quantifiable progress the primary goal of your training!