The sun wouldn't be up for another twenty minutes or so. But already the class was gathered under the feeble glow of a single streetlight, on a concrete slab that at one time had been the foundation of a building. It was now our gym.

Piled in the red, volcanic soil off to the side was a rusty stack of weights and three Olympic bars. This was our equipment. We wouldn't need them today. Today was sandbag day. Each student, at the beginning of training, had been given a sandbag to fill with gravel. One smart-ass brought his back stuffed with a pillow. There's always a smart-ass.

"Listo? Abajo! Uno... Dos... Tres..." I called out the commands as my fellow instructors and I walked the rows, checking form. They were knocking out rock-bottom overhead squats with excellent technique. "Buen forma, senor."

This was the second week of training, and the first time the majority of these men had done any kind of legitimate weight training in their lives. By the third week, many of them were loading the bar with weight in excess of their own bodyweight for front squats.

As a member of the SWCC community, a component of Naval Special Warfare, I've spent more time in the last few years overseas than I have in the states. I've had the opportunity to design and implement the strength and conditioning programs of small forces on three different continents. In this subculture, one's livelihood and possibly one's life – not to mention that of your friends – is heavily dependent on one's body.

Our training, and that of similar forces in other countries, is necessitated by this. The techniques that I've tried, tested, discarded, and eventually adopted have led to the methods that I currently use for myself and many of the men that I work with.

Back home, I also oversee the training for civilian friends and their family members. This has given me a perspective on two worlds that are in some ways quite different.

When it comes to training someone who's new to the world of squats, deadlifts, and the fine art of picking up heavy stuff, I've found a substantial disparity in the learning curve between North Americans and those from third-world countries.

In most cases, the guy who only wears shoes when somebody makes him is going to be pulling deadlifts from the floor and squatting like a pro. While the college kid from San Diego is still working his way down on rack pulls and making a monumental effort to even hit parallel in the squat.

There are a variety of possible reasons for this, but there's one dominant variable that's a great predictor of a trainee's immediate potential before they even step foot in the gym: The third-world squat.

You'll notice that in third-world countries, there will be a lot of situations where people are hanging out or working, and rather than sitting or kneeling down, they squat. They can sit like this comfortably for hours. It seems like a simple thing and can be easily overlooked, but try it some time. The average North American adult can't even get into this position, let alone stay there for any length of time.

I first noticed the impact that this posture could have on weight room performance as a side effect. In order to effectively communicate with the host-nation men that I was training, I wanted to be able to emulate their posture. If you're having a discussion with a group of men who are squatting in a circle around a map or a meal, it's a little awkward to be the only guy who has to run around trying to find something to sit on before you can participate.

That, and I dare you to try sitting down in the grass anywhere in East Africa. They have ants down there with bites so tenacious you can use them to suture wounds. It's generally best that your feet and some good, thick boots are the only thing you have touching the ground.

The guys I work with started doing the same thing, and over time, everyone became increasingly comfortable in this squatting position.

After my guys started developing their third-world squat technique, they started to notice something: Their performance in the weight room was improving. Deadlifting off the floor with a neutral spine and squatting deep suddenly felt like second nature. Lower back pain diminished. The guys started feeling soreness in their glutes and hamstrings after workouts that previously would've only really affected their quads.

Let's compare the differences between the two postures.

The classic North American squatting down to grab something from a low shelf or play with his VCR is going to balance on his toes and shoot his knees forward. He's going to try and make the movement feel as much as possible like his natural environment, which is sitting in an office chair.

The hips and ankles are immobilized and because the force is being relegated mainly to the quads, the effect of the posterior chain is minimized. The musculature of the lower back will be overactive in order to support the weight of the upper body without much assistance from the glutes. The thoracic spine will generally be flexed forward into a kyphotic posture.

Our Swahili-speaking friend is going to keep his weight on his heels. His feet approximately shoulder width apart and pointed straight forward, with maybe a small amount of external rotation. His feet are in line with his knees, and he'll squat down placing his kneecaps neatly into his armpits. This isn't a skill that he acquired at some point, but simply one that he never lost due to a lifetime of immobility and office work.

In this posture, the thoracic spine is neutral and can be easily extended depending on where the individual's attention is directed. The hips and ankles are able to move freely and remain mobile. The posterior chain is carrying the weight of the body, rather than the quads. When he stands, the power to do so will be generated through the glutes and hamstrings. The lumbar spine remains stable and is used primarily to transfer, rather than generate, force.

The law of repetitive motion, popularized by Mike Robertson and Eric Cressey, comes into play here. There are countless opportunities throughout the day in which you can practice the squat and groove proper posture.

How an individual begins to go about this will depend on how immobile he or she is. This means that you'll have to assess yourself. Stop reading this right now. Get out of your chair and get as far into a third-world squat as you can. Since you're probably reading this at the office on company time and don't want to draw too many curious looks from your co-workers, just pretend to be picking up a pencil or rearranging your computer cables.

If you couldn't keep your weight off of your toes and barely got your thighs to parallel before you started tipping over backwards, you have a fairly severe degree of immobility.

If you're at this level it'll be challenging, if not impossible, to squat down with your heels on the ground. Your goal here is simply to attain this.

In order to prevent falling backwards, grab onto something sturdy in front of you, like a doorframe or a handrail. While maintaining a neutral spine (sternum high and brace those abs!) grab onto whatever's in front of you and lean back on it, pushing your butt out behind you. Keep your feet pointed fairly straight forward, and don't allow your knees to track in or out. Your weight should be on your heels. Try wiggling your toes to confirm this. Now drop your hips progressively lower.

Once you can't drop any further, hang out for a while, slowly rocking side to side and up and down. This should free up a little bit more range of motion. Try to maintain this position for about one minute. Repeat this at a minimum of once daily. Either as a part of some pre-workout mobility work, or after sitting or standing for an extended period of time.

As you progress, you'll find yourself dropping lower into the position and becoming increasingly comfortable. At some point you'll be able to drop into a shallow third-world squat without the assistance of an object to hold onto. Congrats, this is your first benchmark. At this point, you'll most likely still need to lean far forward and stick your arms out in order to balance and not tip over backwards. This will be the next set of training wheels to get rid of.

From this point, continue working on the squat at least once daily. This frequency will help ensure steady progress. One minute of holding the position will begin to feel easier, and you can either lengthen the time, or begin adding more sets. Focus on dropping deeper into the squat each day, and bringing your spine more and more vertical. Physically placing your kneecaps into your armpits will help.

Eventually you'll improve to the point that you can sit deeply in the third-world squat without holding onto anything with your arms and without any difficulty in balancing. Your spine will be nearly vertical, in a neutral position, and you'll be able to move freely. Getting into and out of this position will feel no less natural than walking up a flight of stairs or getting into your car. Your body will reap the rewards of this new level of mobility.

From here, all you have to do is maintain what you've got by utilizing the squat on a regular basis. I occasionally set my laptop on my bed and check my email while in the squat position, or drop into the squat for a few minutes while watching TV.

Don't make excuses or think about maybe getting around to it sometime; you can start this today. Next time you have to bend down to try and decipher the mess of wires behind your television, check the air pressure in your tires, or pick up your kid, pay attention to your body. Run through a few quick checkpoints in your head. Are your heels on the ground?

Every day you have a chance to either improve your posture and movement patterns, or put another check in the negative column. The effects of consciously focusing on your posture in this position will eventually add up to some serious improvements in the way your body looks, feels, and performs.

Do a couple of these drills before you lift and you'll get the best workout you've had this year.
Athletic Performance, Powerlifting & Strength, Tips, Training
TJ Kuster May 11

Nagging back pain is no excuse to get fat and weak. Here's how to keep training hard while your back heals up.
Back, It Hurts Fix It, Powerlifting & Strength, Training
Dan Blewett April 21

Get shredded fast with this tough metabolic conditioning workout. Here's how to do it, if you dare.
Metcon, Tips, Training
Adam Vogel July 23 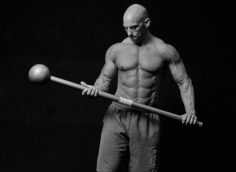