38 years of under-the-bar experience, the best exercises, and why back squats still suck.

"... Tao is often referred to as 'the nameless', because neither it nor its principles can ever be adequately expressed in words."

Aw, what the hell, we'll give it a shot.

No questions, no time limit, and no stone unturned. Training? Nutrition? A little piss and vinegar? It's all here.

The following is what happens when you get on the phone with a top-level strength and conditioning coach and hit "record." 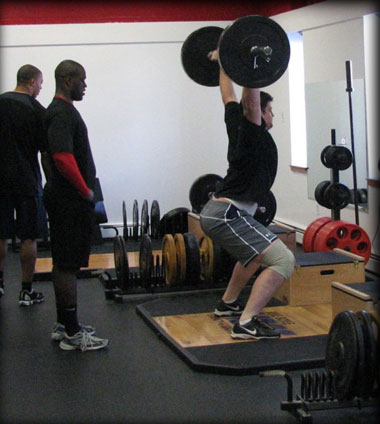 I might be the most criticized guy in this profession. If not, I'm certainly close.

But I get results. We've had Olympians, national champions, professional athletes—you name it. All those guys come through our gym. And people think I don't know what I'm talking about?

When people come and watch my athletes train, they're always surprised. They can't believe they're as strong as they are. They fully expect to come in and see the Richard Simmons show, like I'm going to be wearing a jump suit and headband and making my athletes stand on Bosu balls.

I've got girls doing chin-ups with a 45-pound plate around their waists. How many guys can do that?

I've been lifting weights for 38 years. I started when I was 12 years old with a 110-pound set of barbells in my basement. I grew up on muscle magazines. They were my early education, you know? Man, I remember seeing Boyer Coe guest pose in 1979. Steve Reeves, Gladiator, Hercules...that stuff really got me into the lifestyle.

People look at me and say, "He hasn't been under the bar." Yes, I have. And, frighteningly, I was pretty damn strong.

Right now we've got training experts who don't train anyone and strength coaches who've never competed in anything. Would you take business advice from someone who doesn't have a business or isn't making any money?

You have to keep training people to stay fresh. If you don't keep learning, you'll get to a point two years down the road where you won't know what you're doing any more.

The better the athlete the more self-impressed you are. They learn everything so easily and you start to think it's you. "I'm an awesome coach because I can get that guy to do exactly what I want him to." Listen, when you're training a guy who's projected in the first round, getting him into the first round isn't a big accomplishment. That's where he was supposed to go.

Last year we had four guys make teams—three un-drafted free agents and one seventh-round pick—who all stuck with NFL teams this year. I was more proud of that than any other thing we've done.

A lot of what people tell you isn't true.

First, I didn't say the "people shouldn't squat" thing to be controversial or sell DVDs. That clip was pulled directly from the DVD set by a marketing guy who watched the entire presentation and said, "This is the hook."

I had no idea how crazy the backlash was going to be. I even got some pretty harsh emails from some respectable people. Well, people I used to respect. Apparently they don't have time to think.

Since then, I've had people forward me information about the bilateral deficit. All of a sudden, they're saying, "You're really right."

The bilateral deficit? Well, they've found, particularly as it relates to the lower body, that you're clearly stronger when you train with one leg versus two.

Let's say you've got a guy who can deadlift 300 pounds for reps, but can't squat 400 pounds for reps. More often than not, he will be able to single-leg squat with 200 pounds on each leg for reps. So what does that tell you? He's at less risk because the load is lighter, but he's getting more work out of each leg.

The thing I always hear is, "Well, if they have weak backs, why don't you just get their backs stronger?" Hold on. We're not talking about having a weak back. We're talking about the back being a limiting factor. That's very, very different. A guy who hang cleans 300 pounds doesn't have a weak back. The simple fact is that when someone fails in the squat it's not because they don't have any more juice in their legs. It's because their back can't handle the load.

I wrote an article called "An Apology Letter to Personal Trainers." I've been telling them how to do their job for years and never trained a single non-athlete. Over the past few years I've started to, and it's hard work.

I think personal training is much more difficult than working with athletes. We've got 2 hours per week to counteract the other 166 hours of the week. It's not a good ratio to try and make changes.

Still, some trainers just suck. Like the ones who just tell their clients to go for a walk. That's the exercise equivalent of calling yourself a nutritionist and telling your starving client to go steal sugar packets from Dunkin Donuts.

All the guys who get mad at me on the Internet, I just want to say, come talk to me when you're 40.

I have the huge value of hindsight. I was just like you. I was a meathead. I wanted big muscles and to be strong as hell. If my shoulders hurt after benching, I'd ice them, take Advil and bench again five days later. If my back hurt from deadlifting, well, my back is supposed to hurt from deadlifting, right? I came to realize over time that I was wrong.

Take a look at all these guys with surgeries. It's insane. How can they still be espousing the same principles when they've gone under the knife so much?

Experience is wasted on the old.

Everyone squats ass to grass? Where are they? I go to gyms and I don't see them. When you live in the Internet world there are thousands of guys doing heavy squats ass to grass with no problems. Call me skeptical. By the way, I'd love to see all these guys "laying it on the line."

The best way to learn is to find someone who's doing what you want to do, and read everything they write, watch everything they've put on DVD, and hopefully get to talk with them in person.

The close-grip hang snatch is the best power movement you can do. But you have to do them with a clean grip to spare your shoulders. The only reason guys do it with a wide grip is to use more weight, since it decreases the distance the bar has to travel.

Why from a hang instead of the floor? Size differences. Olympic lifting favors shorter people. Suddenly when you're teaching the snatch to a football lineman, they have a hard time addressing the bar on the floor. It's also more practical to do it from the hang since it spares the back.

I always take the original exercise and try it out. If it doesn't work to my standards, I modify it. If that still doesn't work, I drop it completely. 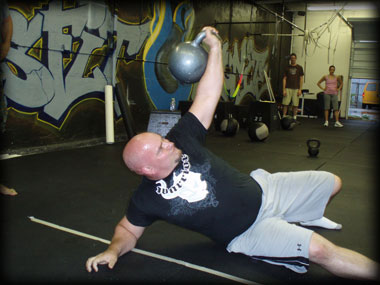 If you'd have asked me a year a go I would have said the Turkish Get-up was a gimmick. Now I think it's probably the best total-body core exercise you can do. And that's part of the learning process!

I can remember reading the early kettlebell stuff and being decidedly unimpressed. I had a million reasons why I didn't like it. But then I started watching my athletes get up off the floor. Nearly every one of them did a Turkish Get-up without even knowing it. I think it's a skill we lose as we age. Have you ever seen an old person try to get up off the floor? It's very difficult for them. I think it's an exercise everyone needs to be doing.

The trap-bar deadlift is probably the best lower-body exercise. I think it's clearly the best bilateral exercise, since you're engaging your erectors and your traps much more than in a squat.

Programming is an art. You can't just mix a whole bunch of stuff together and expect it to taste good. That's called shit soup.

Everyone who foam rolls gets hooked on it, and everyone who doesn't thinks it's stupid. Do me a favor and spend seven dollars and buy a 12-inch foam roller. It'll change your whole life.

And another thing: stretching doesn't have to take that long. You don't need to go to a yoga class. Just stretch your major muscle groups like your hamstrings, groin, hip flexors, lasts, and pecs. Shouldn't take more than ten minutes. When you realize later on that all the injuries you're going to get are because certain muscles get too tight or get knocked out of alignment, you'll thank me.

After you stretch, do some kind of dynamic warm-up and mobility. I remember watching old-time Olympic lifters warm up before their training session, but I had no idea what the hell they were doing. They'd roll their wrists around, drop down into a deep squat and rock from side to side. Now I know they were doing mobility work.

After all the warm-up stuff you have strength. My only major rule here is that for every pushing exercise you should have a pulling exercise. It'll shorten your workouts and save your shoulders. Same thing for your lower body. For every quad-dominant exercise, make sure you're doing a hip-dominant exercise. Throw in some Turkish Get-ups and you have a decent strength program.

I end all my sessions with conditioning. T NATION readers aren't doing enough of it, either. If you're comfortable, or are doing long, slow cardio you can pretty much conclude it's a waste of time. Any young, fit guy should finish his conditioning and have to lie on the floor thinking, "God, that was awful."

People should think and investigate more. Anthony Robbins has always said that success leaves clues. I'm a big believer in that. Whether I like or don't like someone, I'm going to watch what they're doing if they're succeeding. I'm willing to say when I'm wrong.

I'm searching for the perfect training program, the Holy Grail if you will. I can't just suddenly stop searching.

I've been there and done that. But the important thing is I'm still doing it.

Training your glutes can make you stronger, prevent injuries, and turn you into one sexy bastard.
Glutes, Training
Mark Young November 27 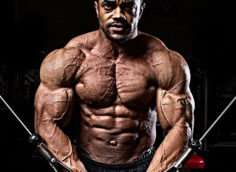