I've seen you. Hell, I've been you. Walking around the gym with no paper, no pen, no nuthin', moving from exercise to exercise, making up rep schemes, cobbling together some flaky excuse of a training program.

Face it, man, you've been pumping the same weights on the same exercises for months and you've got the same body because of it.

Oh, you know what you need to do. You hear it all the time. "Use more weight." "Switch up your reps." "Focus on compound movements."

But you only have a vague idea on how to structure all that. I mean, you didn't go to freakin' Ball State for your Masters degree like Mike Robertson did you?

Fortunately, Robertson is going to teach us how to structure our own programs so we can finally start to wean ourselves off the collective professional programming teet.

But first, a quick note about periodization

It's dead. The word is, anyway. Periodization is just a fancy way of saying, "Separate your training into different phases." But the word has been thrown around by so many wannabe coaches that it's virtually meaningless. Want to know a better word? Progression.

Any coach who actually makes a living from coaching knows that progression is the most important factor in getting you bigger and stronger. But the methods can change depending on whom you talk to. And sometimes that's confusing.

The tactics T NATION bodybuilding coach Christian Thibaudeau uses are different than the methods coaches like Robertson and many others use. But it's the similarities between all their philosophies that are important. It's understanding one truism: if you want to gain muscle or strength, you must force your body to adapt and progress.

The following is just one example of how to do it.

"You don't need anything crazy." 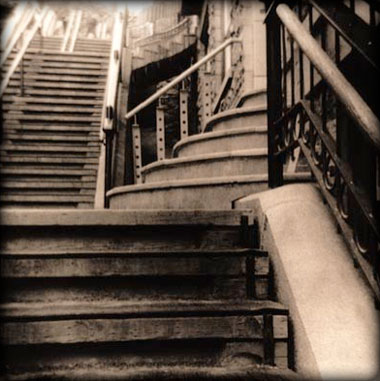 Want to piss Mike Robertson off? Just tell him you're an advanced lifter.

"I know everyone is elite in their own mind, but most guys are intermediate at best. They don't need some crazy triple block intensification Russian routine," he tells me over the phone.

"I made that up. I'm just saying they'd be much better served if they did a simple stair-step approach instead of trying to write 'the perfect program' with a ton of different variables."

According to Robertson, a stair-step program consists of a four-week template where the lifter has a base week, a volume week, an intense week, and a de-load week. The sets and reps change accordingly, which give you the necessary overload required for the muscle to adapt along with the recovery to let the muscle grow. So no more guessing which rep scheme to do.

"I'd use this approach with 99 percent of guys that would contact me from T NATION," says Robertson.

The purpose is simple: progression.

Here's an outline for Month 1 and Month 2 of Robertson's template. Descriptions and explanations follow.

"The first week is the introduction to the exercises," says Robertson. "You need enough time to learn the movements and groove the motor patterns."

In the second week, Robertson adds more total volume, while the third week he drops a set (and sometimes two) but really ramps up the weight.

"You have to get your body to adapt in some form," he says. "It doesn't mean you have to blow it out every workout, but by increasing the volume on Week 2 and increasing the amount of weight you lift on Week 3, you're giving your body an additional stress that'll force it to grow."

So what's up with Week 4 and two dinky sets?

"After a few weeks of hitting your body hard you must have some programmed time off so you can allow supercompensation to take place and give your muscles time to recover and grow," says Robertson.

According to Robertson, one of worst things you can do on your de-load week is ramp up the weight and go balls to the wall.

"Just because it's only two sets doesn't mean you kill yourself. The de-load week is there to keep you healthy. You grow when you cut the volume back."

Why does the first month have higher reps?

By doing the higher rep sets like this, Robertson feels you can prime your body — not only for current workouts, but future ones as well. According to him, you'd get some positive connective tissue changes (you won't blow out your joints) and you'll see some structural hypertrophy (you'll gain some new muscle).

So what happens during the second month? 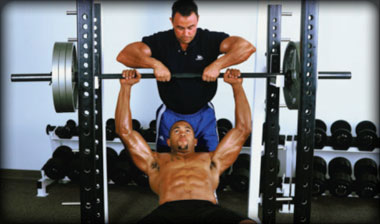 "We'd take the reps down to the functional hypertrophy range of 6 to 8 reps and really bump up the weight."

You'll also notice that Robertson dropped the reps on the main exercise. Why?

"You're trying to recruit the high-threshold motor units, and therefore tap into the fast twitch fibers," he says. "You're forcing your nervous system to adapt, so when you go back to some higher rep stuff you'll be more efficient at using heavier weight. Remember Poliquin's protocol? It's kind of like that."

What Robertson is referring to is Poliquin's "periodization" scheme detailed in his book, The Poliquin Principles. In it, Poliquin asserts that "musculature grows best when both high volume phases (known as accumulation phases) are alternated with high intensity phases (known as intensification phases)."

According to Poliquin, accumulation phases are normally characterized by:

While intensification phases are characterized by:

What's the difference between the main, supplemental, and accessory exercises?

"The main exercise is anything you can generally go heavy on," says Robertson. So deadlifts, Romanian deadlifts, squats, rows, presses, and chin-up variations are all good choices. Hammer curls are not.

According to Robertson the main exercise sets the tone for the rest of the workout and really jacks up the nervous system. The supplemental exercise stimulates more muscle fibers and works the opposite movement pattern, while the accessory exercises help bring up lagging body parts.

Here's what a lower-body day looks like when we plug the exercises in:

"The squat is going to put some stress on the quads," says Robertson. "Then we'll follow up with another big-bang exercise — the Romanian deadlift — that'll work the glutes, hamstrings, and back. Then we'll add two accessory leg exercises and a core movement."

And here's what an upper-body day would look like:

Why only five exercises?

According to Robertson, if you can do seven or eight exercises every time you hit the gym, you're probably not pushing it hard enough.

"If you really busted your ass on those five exercises, you'd be smoked," says Robertson.

Do the exercises change from month to month?

"Sometimes I won't change the primary exercises," he says. "If they're important, it makes sense to keep them in for four to six months and try to add five or ten pounds each time you go through a cycle. If you can do that, you can increase your squat or deadlift by 60 pounds or more while adding at least 30 pounds to your bench."

"But you can definitely play around with switching the supplemental and accessory exercises."

Or you could look at the primary exercises as another sort of progression tool. Robertson likes to start off with a "base" lift and then make it more challenging over time. Say you start off with a rack-pull for your main exercise on your lower-body day for Month 1. On Month 2 you could switch to a sumo deadlift, which increases the range of motion, thus placing new stress on your muscles. On Month 3 you could replace that with a conventional deadlift for a different challenge.

The goal is to "flip-flop" between the accumulation (Month 1) and intensification (Month 2) phases.

A quick note on how Robertson sets up his training day.

Since you can't just head to the gym and expect to be ready to train right away, Robertson recommends the following protocol:

2. Dynamic warm-up "It decreases stiffness in the tissues. It also improves muscle and joint temperature, and primes the nervous system for the workout ahead."

3. Activation "Activation allows us to improve the mind/muscle connection with weak or inhibited muscle groups. It also helps ensure they're engaged when performing our primary exercises."

5. Lift "If your goal is to get jacked, you better be lifting iron and not checking out the cardio bunnies on the elliptical."

6. Energy systems "For fat-asses, athletes, or anyone who just wants to sweat and burn some calories."

Sometimes a simple, bare-bones program is all you need to "turn on" muscle growth and boost your strength if you know how to progress from week to week and month to month. If you've ever found yourself in the weight room wondering what you should do, use Robertson's template as a guide to kick-start your next few months of training.

The proper use of back-off sets, the truth about going to failure, and 5 other rarely discussed habits of great lifters.
Motivation, Powerlifting & Strength, Training
Jesse Irizarry November 23

Weak grip? Small hands? You need to add this exercise to your program. It works fast! Check it out.
Tips, Training
Christian Thibaudeau November 15

Thirty years of iron work ends at the top of the mountain - with the Mountain Dog.
Motivation, Powerlifting & Strength, Training
Dave Tate June 18