The hamstrings are the most undervalued and underdeveloped muscles in the body.

Whether you're a weekend warrior or a competitive athlete, your ability to perform explosively and avoid injury will primarily be dictated by how powerful, strong, and well-conditioned your hamstrings are.

Muscle activation is key to increasing the size, strength, and power of the hamstrings. Research has shown that glute-ham raises (along with Romanian deadlifts or RDLs) facilitate the most muscle activation, but the true magic is in how you do them.

By changing the dynamics of the glute-ham raise and the location of the pivot, we can affect the degree of mechanical advantage, making the exercise easier or harder.

Traditional glute ham machines use the middle of the thigh as a pivot and a first-class lever to increase the mechanical advantage of the movement. This version requires less muscle activation. 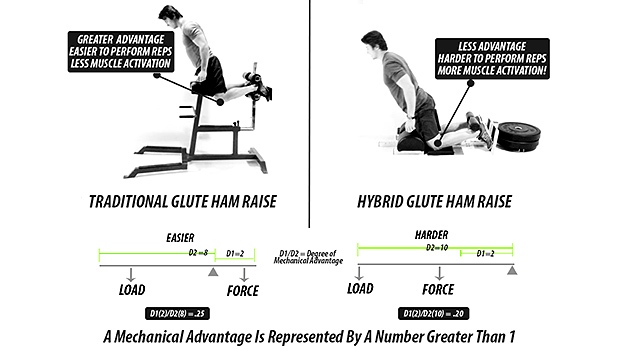 A hybrid glute ham machine, on the other hand, starts as a first-class lever to provide just enough mechanical advantage to start the movement.

As the glute-ham raise is performed, the pivot moves from the thigh to the knee, creating a third-class lever decreasing the mechanical advantage, which requires significantly more muscle activation to complete the movement.

Chances are your gym doesn't have a hybrid glute ham machine. You'll need to make do by simply adjusting the conventional glute-ham raise by moving the footrests closer to the supportive pad, which will force you to take a "higher" position.

One warning, though, this position might cause considerable discomfort to the area just above your knees (there's less muscle there) so you might want to fold up a yoga mat and place it between your knees and the pad for some extra cushioning.

Plyometrics are effective because they take advantage of the stretch-shortening cycle (SSC).

Organs at the insertion points of muscles leading into tendons sense the rate and magnitude of a stretch on a muscle. When a violent stretch is detected, muscles respond by producing more force than they'd be able to during either a concentric or eccentric movement.

To take advantage of this phenomenon, incorporate a rebound glute-ham raise.

Starting at the top of the glute-ham raise movement, completely relax your hamstrings, and allow gravity to pull your body down and forward. When you come within a few degrees of extension, violently contract your hamstrings and pull yourself back to the top/start of the movement as quickly as possible.

In general, stick to sets of 6 reps or less.

Effectively performing the rebound glute-ham raise movement requires an excellent mind-muscle connection. This movement is generally reserved for more advanced athletes because it requires a high level of neuromuscular control.

Pairing rebound glute-ham raises with exercises like RDLs takes advantage of a principle known as Post Activation Potentiation, or PAP, which allows you to perform movements even more explosively.

For example, research has shown that we can improve our jump height if we perform heavy back squats before jumping. The combination of heavy resistance training and a plyometric movement leads to greater improvements than either component performed on its own.

The great thing about the PAP response is that it lasts approximately 4 minutes, with the effect disappearing completely after 16 minutes.

To take advantage of PAP, do a set of 6 rebound glute-ham raises and then, within a couple of minutes, follow them up with a set of 8-10 RDLs.

More isn't always better with plyometrics. A day a week will probably work as well as 2 or 4 days a week. 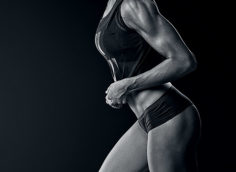 Train on your own terms! You should know how to write your own training programs without depending on anyone else. Here's how to do it.
Bodybuilding, Powerlifting & Strength, Training
Paul Carter October 12
Old School Mass Building
Training
Ian King September 20