I Shoulda' Done It Drunk

I remember lying on the incline bench. It was an "old school" incline bench: long, straight, and red, with footpads at the bottom so you're literally locked in from heel to shoulder for every rep.

Usually I used it as a chair like I use most gym equipment, but in this case I was just holding on to whatever I could with whatever I had left. I stayed on it a long time, and I worried about the ride home on my motorcycle. Leg cramps on a Honda 200 motorcycle are not advised.

What was wrong with me? Well, in June of 1979, with a fair amount of dark Bavarian beer in me, I took on a bet. It was a stupid bet in hindsight... and foresight. I took on the challenge to squat 300 pounds for 61 reps.

Well, you see, in the summer of 1978, we started a new club at the gym. The Pacifica Barbell Club had a bunch of little contests and you entered each contest simply by trying the event. Each contest became a "club" within the club. The list of names began with the original mark and you could enter by beating the previous mark. The list for the incline sit-up club (which I obviously never entered) had two names, as the second mark was 1400.

I decided to try the "Squat Bodyweight for Reps" club. I weighed 218 and piled on 225 – not exactly bodyweight, but it's a pride issue to use the big plates – and squatted it fifty times. Every rep from twenty onward is virtually a max rep. The lousy part of this challenge is that you can literally always do one more rep. Seriously. Each rep from thirty to forty was done with multiple breaths and lots of encouragment. And, of course, if you can get forty, why not go to fifty?

It was fun watching the pool of sweat on the floor grow as I hung onto the bar and worked towards 50. I knew I couldn't let go of the bar and I had to keep focused on something, so I watched my sweat pool grow large enough for the neighborhood kids to enjoy a dip.

There's today's mental picture for everyone trying to not eat: kids swimming in my sweat. Enjoy.

Obviously then, sitting in a bar after a pitcher or three of Barvarian beer, someone commented, "Hey, what could you do if you trained for it?" My idiotic response was something like, "Well, 225 is too light; you'd need to push the weight up."

I think I had some Newtonian explanation for this BS, too. So we drank and continued to up the ante, until I took on a bet to squat 300 pounds for 61 reps. I was allowed to train a few weeks first, of course.

That was a mistake; I should've done it drunk.

How Can I Top This?

So, this all leads me to the start of this story: lying on an incline bench. Why? Well, my training that day consisted of:

Which leads us to this article. As I sat there sprawled across a device better suited for upper pec development, I thought, "I've been here for two hours and I've done three sets. How can I top this?"

You see, I couldn't. True, within a few weeks my thighs had grown off the charts and I seemed to have dropped a keg of body fat, but I simply couldn't fathom continuing to train like this.

It's a profound issue and will be a factor in the training of every single person who reads T-Nation or ever attempts to push the envelope in training: how do I possibly repeat that effort?

Like the perfect moment, the perfect kiss, or the perfect date (see Bill Murray's Groundhog Dayfor more information), the perfect workout is hard to repeat. What's "perfect?" Well, it depends on who you are, but for most of us it might be that day when the weight on the bar, the number of reps, the number of sets, and the intensity of the exercise selection all combine to make whatever you write in your training journal literally stagger you a month or so later when you read it.

Stagger you? Out of nowhere, you add thirty pounds to a max, deadlift another set of wheels, or complete some kind of mad challenge that still wakes you up years later, softly sobbing into the night.

I had a friend tell me about going to a world famous gym and having a famous bodybuilder ask to train with him. My friend did, and he went set for set with the best in the world. And, the next day, he was unable to get out of bed.

The Rule of Five

So what's the point of all of this? What can be learned from my idiotic challenge? First, a couple of general insights. I have a little formula concerning workouts which I call the "Rule of Five."

In a group of five workouts, I tend to have one great workout: the kind of workout that makes me think that in just a few weeks I could be an Olympic champion and Mr. Olympia. Then, I have one workout that's so awful that the mere fact I continue to exist as a somewhat higher form of life is a miracle. Then, the other three workouts are the "punch the clock" workouts: I go in, work out, and walk out. Most people experience this.

Now, in a 100 workouts, I'll have twenty great workouts. Of that twenty, a couple will be flat out amazing. And in a 1000 workouts, one is worthy of an article, or bragging to your buddies about. So, once a decade, if you're lucky, you have that workout.

The Good, The Bad, and The Lousy

Unfortunately, many people think they're under-training all the time because they don't puke every workout, the world record doesn't fall during the session, or a swarm of reporters from People magazine aren't taking your picture. Really, I never understood this idea that every workout had to be the best and finest training moment of your life.

This brings to mind two things: where else in your life does something become better and better and better every single time? Meals? Sleep? Work? Even sex can have highs and lows. (I was going to say "ups and downs," but somehow even I can't handle that level of bad pun.) Furthermore, how can you honestly think that training improvements are that linear?

Remember this: if you bench press 100 pounds and add ten pounds a month, you'll bench 460 in about three years and 500 hundred in a few more months. How many of you with three years under your belt are pounding out 500 pound benches? (You know, in the gym, not just on the Internet.)

In other words, give yourself a break emotionally and physically... most of the time. We should begin a thread called "Awful Workouts" and share those wonderfully bad workouts that one rarely admits having... and we have them all the time! An example:

Rubbed injured back for six minutes from exercise with tote bag

Did one pull-up and played with a plastic dumbbell

Occasionally, we'll see someone who argues that we must always train harder and harder, usually quoting Arthur Jones. But you'll also notice that rarely do we see people outline these kinds of workouts for more than two to six weeks. Why? Reality. And we all need a healthy dose of it now and again.

I've discovered that I can press myself to push hard for three week doses. I've also discovered that week four better be light or "off," otherwise I'll be in rehab. I'm not urging retirement or sloth or a buffet of light workouts. My focus is on the reality of training.

1. We can all train really hard. Then, we have to plan to ease up a little bit. It doesn't have to involve higher math; simply plan a hard couple of weeks and toss in an easy week. Small wonder many of the classic training plans are three days a week with a heavy, medium, and easy day.

2. Redefine "easy" in your training, too. I like to use my easy days to try a new lift or perhaps even invent something new. The idea of doing snatches followed with sled pulls (yes, the sled harness is on during snatches) began on an easy day. I later changed the workout to a "hard day."

3. Embrace lousy days. I've learned to remind myself that easy days are part of the deal, and a great day is just around the corner.

4. Finally, don't let a great day destroy years of planning and training by thinking that this is now the norm. Enjoy the day, but keep a little humility. 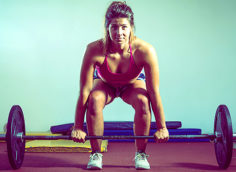 Are you missing a big portion of your hammies? You are if you're neglecting to do these two things.
Bodybuilding, Legs, Tips, Training
Nick Tumminello April 28