Packing a lot of meat on your trapezius muscles is the cornerstone of what I call "the power look." The power look is simple to recognize. It's characterized by the sound of jaws dropping to the floor when you enter a room and by the sentence, "Sorry sir, I'm not looking for trouble," whenever you accidentally bump into someone in a nightclub. The power look is something that can't be hidden under clothing, nor can it be faked. Regardless of how you're dressed, you just look damn strong, like an animal ready to charge.

I'm going to give you a traps-specialization program to help you get that "I'm-gonna-eat-you-alive" power look. This program is to be done once per week where you'd normally perform your back workout. I suggest including this workout in the beginning of the week while you're still fresh because it's hellish work! I also suggest you have at least 72 hours between this workout and your shoulder workout because of possible fatigue carryover.

Named after its creator, Romanian weightlifting coach Istvan Javorek, this complex is a superset of three exercises aimed at developing the shoulder girdle with an emphasis on traps. It acts as both a specific warm-up for the upcoming exercises and a great hypertrophy tool.

Using a snatch grip, start the bar slightly above the knees. Using your whole body, bring the bar up to your sternum; be sure to contract your traps forcefully at the end of each repetition. Notice how the bar is kept close to the body and how the body is fully extended. Do six reps of this exercise.

This is best described as a cheated upright row. Start the bar at the knees and bring it up to your chin using your whole body. Perform six reps.

This exercise is aimed at developing the rear deltoids and the middle portion of the trapezius muscle. It's similar to a regular barbell row except the goal is to reach maximum scapular retraction (try to squeeze your shoulder blades together) rather than arbitrarily bringing the bar to your body. For this exercise you do six reps also, but you hold the static contraction (in the "squeezed" position) for five seconds per rep.

Repeat this three-exercise complex twice. Note that there's no rest between sets and you use the same load for all three exercises (that's why the hardest exercise comes first and the easiest one is last). After the last complex of the second set is completed, rest and/or throw up, then move to exercise B below.

B – Power Clean from Blocks

It's no secret that Olympic lifters as a group have the biggest traps in the world of athletics. This is for a good reason: they're pulling machines! A little Olympic lifting will help you get those monster traps you want! The power clean is a great place to start.

The power clean from blocks is unbeatable when it comes to increasing pulling power. Since the bar is placed on blocks in the starting position (slightly above the knees) the movement becomes easier technically (so you can focus on exploding) and the acceleration path is short (so you must explode to complete the lift). Lifting from the blocks also has the advantage of placing your body in the optimal pulling position.

Start Position: Feet are hip width, toes are turned slightly outward. Legs are slightly flexed at the knees (around 140-150 degrees). The trunk is flexed and the back is tightly arched. Shoulders are in front of the bar and arms are straight. Traps are stretched and the head is looking forward.

The Pull: Explode upward with a powerful leg and back extension. The bar should be kept close to the body at all times. The traps contract forcefully to further accelerate the bar. Basically, what we want is for the body to resemble a bow (hips forward, back and legs extended).

The Catch: Catch the bar with a slight knee flexion. Don't catch it with straight legs; learn to squat under it. Catch the bar on your shoulders and whip your arms around so that the elbows are pointing forward, not down.

Perform three sets of five reps on this movement. Keep in mind that we're using it to gain muscle size, not to gain athletic ability or to become a competitive Olympic lifter. We don't want to use big weights at first; focus on learning the proper technique and explosion.

Overhead shrugs are an exceptional traps builder and a great way to increase your capacity to hold loads at arms length.

Start position: Hold the bar overhead (intermediate grip) as if you'd just completed a shoulder press. Stretch your traps by bringing your shoulders down. Keep the arms locked and the bar overhead. The trunk must be kept tight.

The Shrug: While keeping a tight posture, bring the shoulders up by contracting the traps, the shoulders must go up in a straight line. Hold the highest position for two seconds.

You'll perform a single set of twenty reps on this exercise. Chances are that after ten reps you won't feel your upper body and after fifteen you'll feel like you're about to enter the Twilight Zone. This is how you know it's working!

This exercise is a great overall back builder. It's also great to develop the whole trapezius muscle, provided that you actively work to keep your upper back flat during the execution of the movement.

Start Position: Feet are hip width, toes are turned slightly outward. The hang grip is wide (approximately twice shoulder width). Legs are slightly flexed at the knees (around 100-110 degrees). The trunk is flexed and the back is tightly arched. Shoulders are in front of the bar and arms are straight. Traps are stretched and head is looking forward and down.

The Pull: From the ground to the knees, the bar is lifted via a knee extension; back angle remains the same. The back stays tight and arched. The arms stay long and keep the bar close to the body. From the knees up to the standing position, the bar is lifted with a combined back extension and knee extension. Back stays tight and the arms stay long. The lift is completed when you're standing up completely.

For this exercise you'll do three sets of five reps. Try to increase the load as much as possible while keeping good form. If you feel that your upper back is rounding, you're using too much weight.

This exercise is a very effective shoulder builder. It'll increase strength in all heads of the deltoids and also develop your rotator cuff muscles. Using this exercise is a great insurance policy for your shoulders and it's also a killer traps exercise!

Start Position: Stand up with a dumbbell in each hand and arms at your sides. Keep a good posture and look forward.

The Shrug: The initial lift of the dumbbells is a semi upright row. Contract the traps and arms. Hold that position for two seconds.

The Rotation: Rotate your shoulders so that your arms end up overhead, pointing outward and up.

Perform one set of twenty reps. No need to use a lot of weight; with only 10 to 15 pounds you should feel your arms begging to come off.

Here's a quick summary of this beastly traps routine:

Remember to perform this routine only once per week on back day. Give this workout a try and in a short period of time you'll have traps that defy imagination and will earn you a cool nickname like "The Bull," or "Sir!" 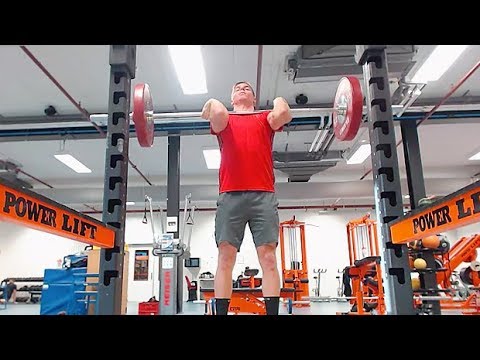 The box jump is an okay test, but it's not really a training method, at least not how most dopes do it. Here's why.
Athletic Performance, CrossFit, Tips, Training
Nick Tumminello April 25 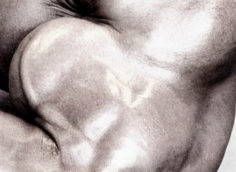