There may be nothing new in the weight-training world, but there are things that fail to receive the attention they richly deserve.

Take posterior chain exercises, for example. For the most part, knee flexion exercises have played second fiddle to their hip extension cousins, despite strong evidence of their efficacy in improving strength and reducing injuries.

That's sad. I for one hope people start using more knee flexion movements, and if you were to choose one based on effectiveness, ease of use, and overall versatility, you'd find none better than the Nordic.

Described by some as the "bastard stepchild of the glute-ham raise," the Nordic is a veritable assault on your knee flexors that requires that you lower your body using only your hamstrings. The fact that it requires no equipment leaves those that shy away from it without any excuses for doing so – well, other than it's damn hard to execute properly.

But before you hop on the Nordic bandwagon, here's some tips on how to best incorporate and progress them, and later tweak them for the biggest bang for your hamstring training buck.

Introducing Nordics into a Program

Inappropriate volumes of highly damaging exercise can lead to lasting decreases in muscle volume (e.g. Foley et al., 1999). Likewise, slow yielding contractions done over 10 weeks may be inferior to faster ones (e.g. Paddon-Jones et al., 2001), as the excessive torque-time integral produced may have produced damage beyond the regeneration capacity of the muscle. The conclusion is that excessively slow muscle actions should be avoided.

Nordics can be best progressed by increasing their loading gradually and controlling the lowering phase while not performing it too slowly, and training the exercise 2-3 times per week.

I also recommend unloading the volume of Nordics by cutting the number of sets per session by a third to a half every 5-6 weeks, which might coincide with recovery microcycles.

Finally, Nordics may not be the best option for rank beginners or individuals with inadequate relative strength levels, including very heavy trainees. Moreover, very tall individuals may find these especially hard. For those not yet ready for Nordics, see the 'Further Exercise Alternatives' section for other options.

Tricks to Improve Your Nordic Prowess 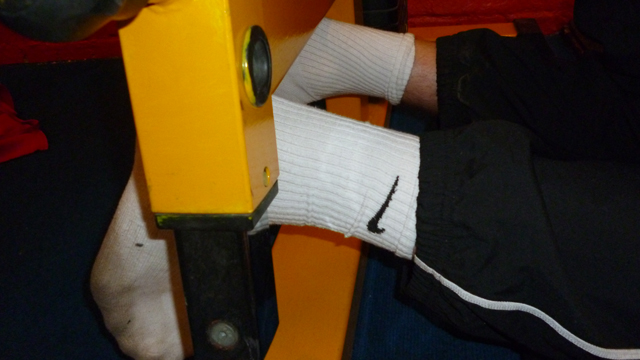 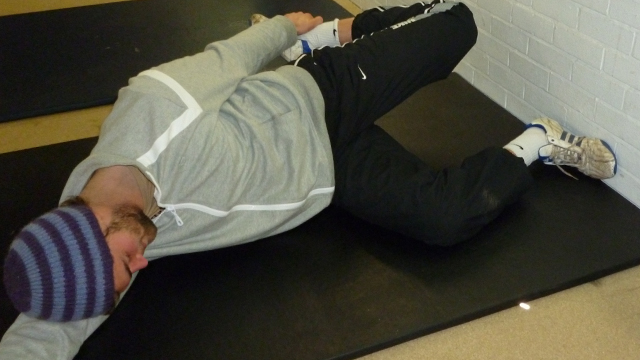 Variations of the Nordic

There are several levels of difficulty regarding the Nordic. As you gain proficiency, you can make the exercise more challenging than it already is.

Anchor your ankles comfortably under an immovable object, or have somebody sit on your heels. Kneel tall with your arms by your sides and imagine a piece of string pulling you upwards from the crown of your head. Fix your eyes straight ahead. 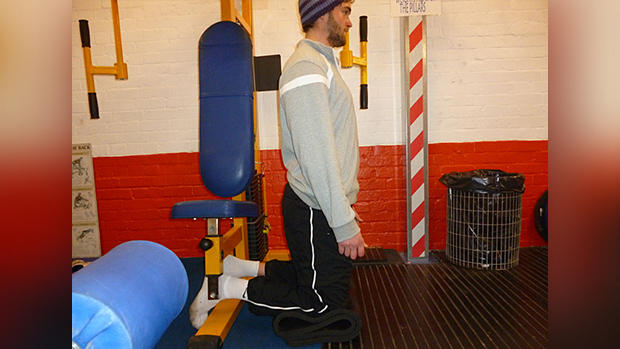 Lower yourself as far as you can under control, and then reverse the motion to return to the start. It should look like a glute-ham raise, but without the pad to help you out. 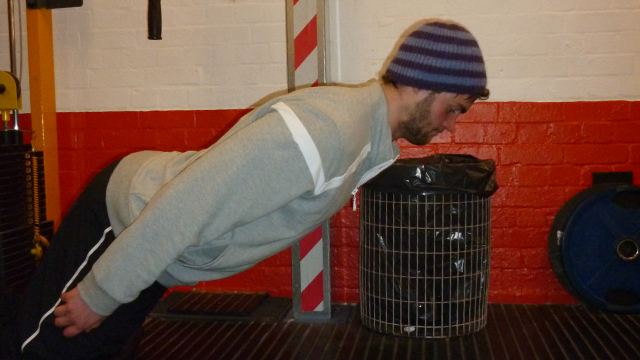 Flex your hips and your knees such that your thighs are roughly vertical and your torso horizontal. Extend your hips to return to the start. 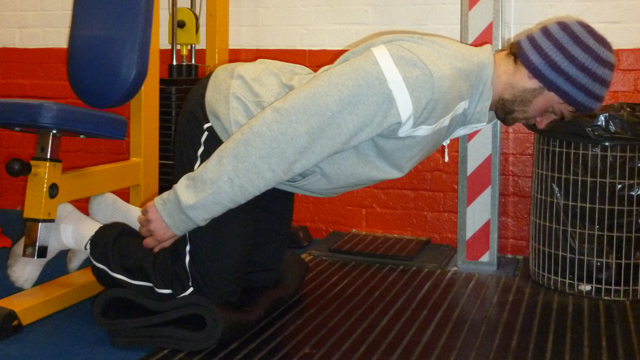 Once mastered, the next step is to perform these with your hands touching your ears. 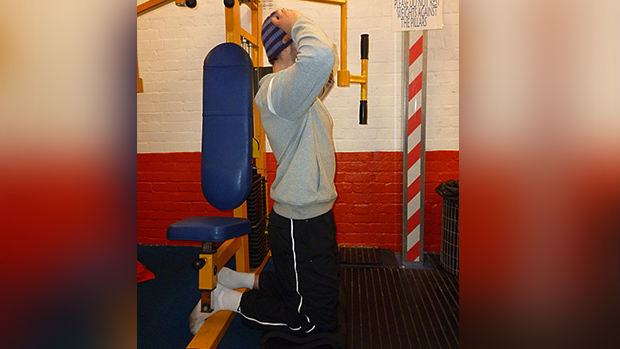 Next up, perform the exercise as previously, but with the arms held straight overhead. 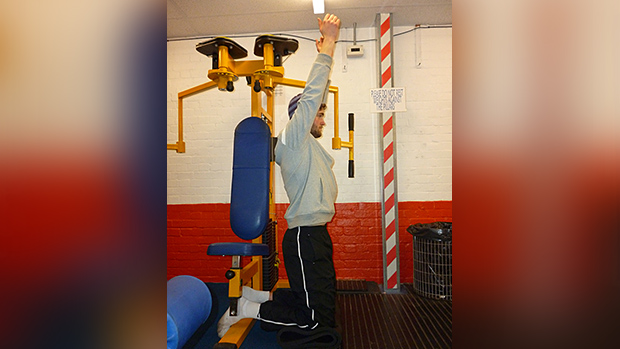 The Nordic stud could then move into mechanical drop sets. Perform Nordics with the arms straight overhead until just shy of failure. Without resting, move the hands to the ears position and continue doing reps again until just before failure. Finally, bring the arms by the sides and eke out a couple more reps. True masochists can then finish with modified Nordics. 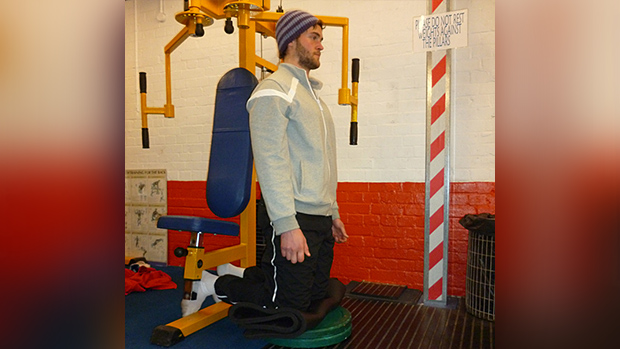 This version has undoubtedly proven very effective, but many would probably choose to not train their hamstrings 3 times a week. Furthermore, there are no unloading microcycles included (this isn't inherently problematic, but I'd probably include one every 6 to 12 weeks). Finally, 12 repetitions of the Nordic is a big task (especially if you don't sacrifice quality for quantity).

As such, I offer a modified version.

Choose a Nordic variation appropriate to your current strength levels.

At the end of this 6 week mesocycle, move on to the next Nordic progression. i.e., hands by ear, arms overhead, etc.).

The Nordic is an under-appreciated exercise that anybody with a pair of legs and feet can do. Implemented correctly, it could be your ticket to bigger, stronger, and bulletproof hamstrings. 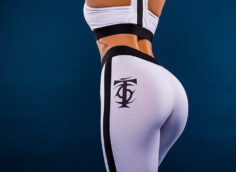 Fight the sag! This untraditional glute exercise will stretch and load your money-maker in a way that hits the most common trouble area.
Exercise Coaching, Glutes
Gareth Sapstead July 7

How to build powerful traps that perform as good as they look.
Bodybuilding, Training, Traps
Christian Thibaudeau November 15 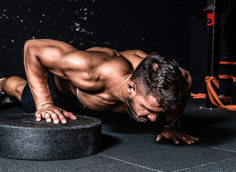 Build your pecs with this power move.
Training
Tom Morrison January 3
How to use Strength-Endurance Training to be Stronger... Longer
Training
Matt Wiggins October 17