When it comes to hypertrophy, we could go deep and talk about motor units, protein synthesis, mitochondria, signaling pathways, etc. But do you really NEED that info to build muscle?

Nope. What you need to know are the practical guidelines that are research-backed and proven on the gym floor. Here are the simple answers to reach your hypertrophy goals.

The scientific evidence on rep ranges tells us that there’s no magical rep range for maximizing muscle size. You can use both heavy, low-rep (1-5) sets along with medium-load, high-rep (15-20+) sets if you’d like.

But many people focused on building muscle are usually not interested in using weights so heavy that they can only do five or fewer reps with it. And that’s fine. Doing some sets in the 6-8 rep range serves as a nice middle ground.

The amount of weight you’re using also determines the quality of reps you’re doing. If the load is too heavy, you may not be able to do good, quality reps.

That said, at any given time at any big-box gym, you’ll see at least one guy doing biceps curls or shoulder raises, and he’ll have to thrust his lower back into it each time he brings the weight up.

It’s easy to make this mistake. After all, you’re in the gym to lift weights, and everyone knows heavy loads are an effective stimulus for muscle growth, right? Well, sort of.

Training to maximize muscle isn’t about becoming a “weightlifter” as many seem to think. It’s about using weights as a tool to increase your muscle size. Simply throwing as much weight around as you can to impress people is an ineffective approach.

Here’s what happens when you use weights that are too heavy:

Training to maximize muscle isn’t just about moving the weight from one point to another, as you would when weightlifting. It’s about controlling the weight through the entire range of motion. The point of emphasis on each rep is to avoid swinging the weight up or cheating by using other parts of your body to move the load. 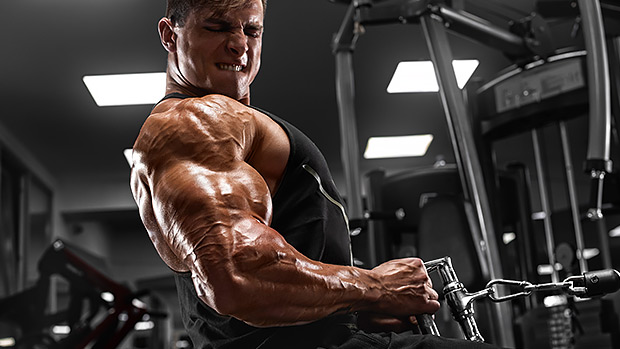 Do the concentric (lifting) portion of each rep at a normal tempo and maintain control during the lowering portion for about a 3-second eccentric on each rep.

When you’re trying to maximize gains, controlling the weight and minimizing momentum also applies to the eccentric/negative portion of each rep. People who cheat the weight up normally also let the weight come crashing back down. When gains are the focus, maintaining deliberate control is paramount.

Letting the weight swing down without control may be even more ineffective than you think. We have evidence demonstrating that a slower (4 second) eccentric during biceps curls produces more arm growth than a 1-second eccentric action (2).

This makes perfect sense. Lowering slowly creates more mechanical tension on the working muscles than a shorter eccentric portion does.

And since cheating only creates an overload of mechanical tension in a small range of the motion, it’s more likely that you’ll use a weight that’s too heavy for you, making the muscles deal with forces that exceed the structural integrity of your tendons and ligaments. Injuring yourself isn’t conducive to hypertrophy.

If you want to maximize your size gains, maximize your time under tension by using strict form and a controlled eccentric lasting around 3-5 seconds.

The amount of weight you use on each set is determined by the amount of reps you’re doing. Choose a load that leaves you unable to perform any more reps than indicated on your workout program, but without cheating by using additional jerking, twitching, or momentum.

So if your program calls for 3 sets of 8-12 reps, grab a weight that’s not too heavy to get at least 8 reps, and not so light where you can do more than 12 reps before reaching technical failure.

The Best Number of Sets

It’s a mistake to have a “balanced” training program that dedicates roughly the same amount of exercises, total sets/reps, and training days to your less-developed areas as it does to your well-developed muscle groups. If muscle growth is your priority, then growing the lagging areas should be your focus.

I remember listening to a two hour “debate” from a couple of science-based coaches who both specialize in hypertrophy training. Their entire debate concluded with the agreement that 12-20 total sets per muscle per week is good rule of thumb for hypertrophy – an idea that’s been around for years.

That said, if you’re looking to bring up certain lagging muscle groups, the first thing you need to do is count the total number of sets you’re doing each week for those muscles to see if you’re getting at east 12 sets per week on each area.

If you’re already hitting that minimum, then it’s time to add a few more total sets per week to those muscle groups. 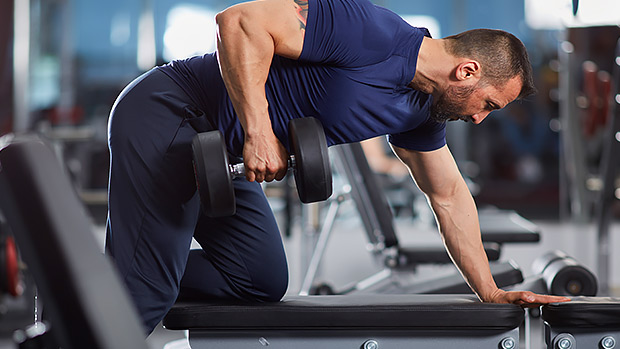 The best type of training split is determined by how many days per week you’re training. It all comes down to getting in enough training volume of each muscle group throughout the week.

If you’re training 2 to 3 times per week, total-body workouts are best.

If you’re training 4 times per week, an upper-body, lower-body split like this is best:

For a four-day-on, one-day-off split, here a two of my favorites:

Regardless of which setup you use, can always throw in a few extra sets for another muscle group that you’re not necessarily focusing on that particular day if you need to increase the number of sets it gets to spark more growth.

Resting longer than three to five minutes doesn’t mean performance will increase further. Plus, you’ve only got so much time to work out anyway.

Speaking of maximizing your workout time, the reason why the two above four-day rotation setups are favorites of mine is because I’m a big fan of using paired sets, such as pairing up a chest exercise with a back exercise, a lower-body exercise with an ab exercise, and an arm exercise with a shoulder exercise.

Don’t get me wrong. There’s nothing at all wrong with straight sets. You can use them effectively to get seriously big and strong if you have the time. 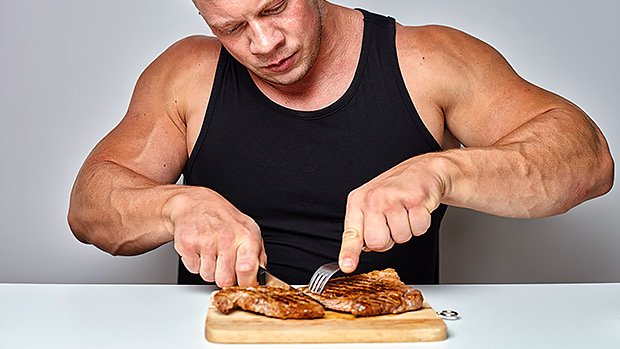 Everyone talks about needing a caloric deficit for fat loss, but is a caloric surplus needed to build muscle? Not necessarily. This is because stored fat is stored energy. And that energy is available for the body to use as fuel for the muscle-building process.

That said, to date, there are several studies showing that, yes, you can simultaneously build muscle and lose fat. Research has demonstrated this in variety of populations:

But hold on. Get this part straight: Your body can’t turn fat into muscle or vice versa. Fat is fat; muscle is muscle.

If you’re overweight, your body can use your stored energy (fat) to fuel the muscle-building process when the needed calories to build muscle aren’t coming from additional food intake.

So what IS the best diet? That depends on where you are now and what you’re trying to accomplish. And whether you’re in a caloric deficit or not, make sure it contains enough protein. That’s the main piece of diet advice if you’re trying to build muscle. The standard rule of thumb is one gram of protein per pound of bodyweight.