We've done it again. We wrote about a workout instead of a specific exercise. Literalists everywhere are probably outraged.

No matter. Once they try this calf routine, all the piss and vinegar will leak out of them like oil out of a rusty Albanian tanker.

This routine, like last week's, comes to us courtesy of Charles Poliquin. We first posted a version of it back in 1998, when Charles was just a spry young strength coach with sweaty flanks and a shiny coat.

Charles originally devised this program for Olympic skier Luke Sauder. The idea was to build Luke's calves up so big that they'd actually provide a cushion to prevent his knees from reaching too severe an angle as he jets down the mountain.

Before we give you the routine, let us relay some of Charles' thoughts on calf training. Part of the problem in growing the calves is the limited range of motion afforded by calf movements. If you're doing squats, for instance, the range of motion is considerable and it's easy to vary the tempo. For instance, you can complete the eccentric component of a squat over the course of 3,4, or 5 seconds pretty easily. Not so with calf movements; the range of motion is about as short as the one you might use to pleasure yourself and you can't vary the tempo as easily.

As such, you have to work the snot out of your calves. Let's take a look at the actual routine:

*After finishing a set of the A1 exercise, proceed immediately to exercise A2. Then rest two minutes before repeating the super set.

**In other words, you'll be doing one, long, extended set, resting ten seconds between each mini-set and lowering the weight in between.

(Caution! Your calves will cause you great pain following this workout. Resist the urge to hack them off with a butcher knife.)

***The pause is taken in the bottom stretch position, and be sure to take the full two seconds.

Do this routine twice over a five-day cycle.

Charles swears the routine provides freaky size increases as it provides an ideal mix of frequency and volume. He's known people to gain anywhere from 5/8ths of an inch to a full inch with this routine in as little as 30 days.

Let us know if he's right. 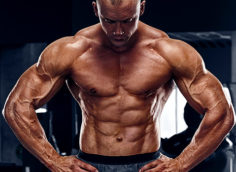 The muscle-up looks cool, but if you're using bad technique then it's just a trick. Here's how to make it into an effective exercise.
Exercise Coaching, Tips
Drew Murphy February 7

Maybe you're a bodybuilder through and through, but you still ought to know how to do some of the "old time" training methods like the split style. Besides, it may just put on some muscle, and that ain't bad.
Training
Jeremy Frisch March 11
How to use Strength-Endurance Training to be Stronger... Longer
Training
Matt Wiggins October 17