One contest prep coach I know had a client who was following his diet to the letter, but wasn't getting in shape fast enough. His caloric intake was already low and his workouts were already taxing, so starving him more and training him harder was off the table. Too many drawbacks there, like potential muscle loss.

So why had his fat loss stalled out? And how did the coach fix it? Well, it turns out that the client had failed to mention that his job had changed. He'd gone from working outside, where he had to do a lot of walking, to working inside, where he did very little.

That alone was the difference in why he wasn't getting lean at the expected rate. He was simply moving around less outside of the gym.

That "moving around" is called NEAT or non-exercise activity thermogenesis. If your diet and training are on point yet you can't seem to drop those last few pounds of fat, NEAT is your key to the city of Shredsville.

Your total daily caloric expenditure comes from a variety of things:

All these together account for your caloric output. And a recent study shows that those people with a high level of "energy-out" are the ones that lose fat and keep it off for over 10 years (1).

So, eating less and less really isn't the solution for losing fat and keeping it off. Eat less and move more is, in fact, quite accurate. But maybe it's more accurate to say, "Eat less, move more consistently... and not just at the gym."

It's NEAT that may be the biggest factor in sustaining your fat loss. If you're working out and eating reasonably okay, it's quite possible that the reason you're not shedding fat is because, outside of the gym, your activity levels make a hibernating bear look like a hyperactive three-year-old.

With life now consisting of desk jobs or other sedentary forms of employment, average energy expenditure outside of the gym is low. If that sounds like you, NEAT is probably what's missing in your fat loss efforts.

The good news is, increasing it is relatively easy if you're cognizant of just moving more.

Increasing your movement is simple and takes virtually no toll on systemic recovery. Just be mindful of moving more during the day. Here are some ideas for increasing your energy expenditure:

You get the idea. Unless you already have a job that requires a lot of movement, you absolutely need to be moving more if your fat loss is stagnant. And you need to keep moving each day if you want to keep the fat off.

NEAT is one of those little secrets that isn't intentionally kept from anyone. It's just that most people don't think about it. But it matters a lot when it comes to creating an energy deficit.

Once the internet gets ahold of any fitness idea you can pretty much set an egg timer to see how long it'll take before it's bastardized, taken to extremes, and proclaimed the panacea.

The fitness community is like the opposite of a Bob Ross painting. Bob starts with some delicate brush strokes, then half an hour later you're looking at an epic composition full of happy little trees. Every detail is influenced by and combined with a dozen others until the work of art is complete.

But the fitness world will take a solid idea, consume it in mass with a box of crayons, wash it down with a bottle of caster oil, and then shoot it out like technicolored poo all over the canvas. And that's kind of what happens when simple concepts get overemphasized and marketed as a cure-all.

IIFYM (if it fits your macros) was an approach merely meant to help people relax a bit in terms of food selection. If you wanted some mac n' cheese instead of rice, you'd just account for the calorie and macro differences and fit it into your daily quota. Pretty cool, right?

But since common sense and moderation are boring, it didn't end there. Social media gurus took this simple concept, made it as extreme as possible, then injudiciously spewed it all over the internet.

When IIFYM is bastardized it's usually done by those who say all foods are "equal" based on only calories or macros with no further consideration of nutritional content. They'll even go so far as to say: "Calories are ALL that matter in terms of improving body composition."

But calories aren't ingested in some type of isolated environment where there isn't a cascade of other physiological events that happen afterwards. And different foods will create different effects that play a part in creating a degree of compliance with caloric intake and dietary control.

How does your diet plan make you feel and function? That's important because how you feel and function will affect what foods you crave and eat next. But this reality hasn't stopped the army of spaghetti-armed online gurus from latching onto the misguided idea that calories are ALL that matter.

The latest version of this is the idea that energy-in versus energy-out is the only consideration for fat loss, and those who push it say that all you need to do is keep lowering caloric intake until you're diced and sliced.

To them, you don't need cardio, nor do you need to be overly active. You just need to lower the calories that are coming in.

If this is the way you get people to lose fat, then well done, coach. You're really a wealth of information and clearly the Stephen Hawking of the dietary coaching panel.

Continuing to lower the caloric floor is unsustainable and impractical. At some point you won't be able to lower calories any further, you'll be hungry as hell, and you'll lose muscle.

Just expend a bunch more calories in training instead of eating less, right? Well, not so fast.

Exercise itself is a piss-poor tool to use for energy expenditure and increased fat oxidation. You lift weights to get stronger and build muscle, and you do some cardio for restorative effects, improved work capacity, and to get some supplemental fat burning.

In the big picture of losing fat and keeping it off, it's a combination of dietary compliance and keeping your energy-out systems humming along with it.

The cliché, "you can't out-train a bad diet" has been said so often that it doesn't resonate like it used to, but for most people, it's true. Yet the average person would rather exhaust himself on a step-mill than not eat the cheesecake.

And then he'll complain when he gets nothing out of it but exhaustion and hunger. Which means dietary compliance will be even harder... and whoops, you just blew your diet.

It's most definitely easier to eat 900 calories from cake or basically any overly processed food than it is to expend 900 calories worth of energy. And then you hear from people who say this: "But I burn 1,000 calories in an hour down at Orange Theory!"

Settle down. You really don't. I don't care how much your Fitbit says you burned or what your overly enthusiastic instructor said. A grand of calories burned in an hour is a Herculean effort that's far beyond the scope of some basic interval training, and outside of some elite outliers, can't be done.

A continual lowering of energy (calories) intake isn't really a viable solution for those who want to shed fat and keep it off. The intelligent solution is to find a caloric floor that works well in conjunction with your energy expenditure to create a sustainable lifestyle.

If you've been stuck in terms of fat loss but feel as though your caloric intake is dialed in, examine your energy output. Especially your NEAT. That could be the missing ingredient for faster fat loss without having to take more food off your plate. 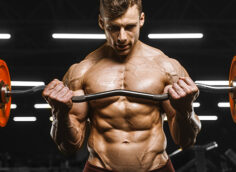 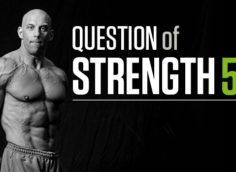 How bodybuilders can fight post-show depression, how to eat carbs and stay lean, and what to do if squats make you hurt.
Powerlifting & Strength, Question of Strength, Training
Christian Thibaudeau December 31 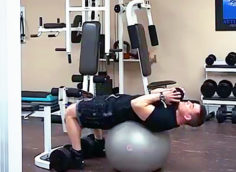 Want to build great abs? Forget sit-ups. Want great biceps? Forget all those curls. Want a great chest? Forget the bench press. According to Chad, isolation movements are a waste of time. He's either nuts or a great visionary.
Training
Chad Waterbury October 16