I recently created quite a stir by stating that jogging is probably the most effective form of non-surgical gender-reassignment available for men. When T Nation tweeted this quote, it went absolutely viral, generating hundreds of impassioned comments. People called me brilliant. They also called me a complete idiot.

So is jogging really the worst thing you can do? Does it have any upsides? Will it really turn you into a chick? If so, what are the alternatives? Let’s dig deeper into this puzzling pastime and clear the air.

What Is Jogging Anyway?

Jogging is defined as: “A form of trotting or running at a slow or leisurely pace. The main intention is to increase physical fitness with less stress on the body than from faster running, or to maintain a steady speed for longer periods of time. Performed over long distances, it is a form of aerobic endurance training.”

In the United States, jogging reached critical mass in the 1980’s, thanks in large part to the published works of Dr. Kenneth Cooper, who touted aerobic exercise as the ultimate preventative measure against heart disease, as well as the best way to improve total fitness. Of course, as time marches on, so does the progressive stripping back of ignorance, and today we know much more about the questionable role of aerobic exercise in disease prevention and fitness acquisition.

Before I start in with the arguments against jogging, let’s outline the possible positive features. Stay with me, this won’t take long.

Jogging Is Better Than Lying On The Couch Eating Cheese Doodles. Maybe.

Now, don’t get me wrong, lying on the couch with orange powder all over yourself is in some ways better than jogging (no cortisol production, no joint stress, no suicidal ideation, etc.). But at least in principle, and particularly for beginners, any form of activity has the potential to be superior to inactivity. I say “in principle” because the real life downsides are indeed significant.

Let’s examine the psychology. Imagine yourself as a sedentary, overweight guy who breaks out in hives at the simple thought of exercising. Now imagine jogging. See where I’m going with this? It’s going to hurt, it’ll be embarrassing, and in short, it’s gonna suck. You’ll blame yourself for being a pussy, but in truth, it’s not your fault at all – jogging sucks on an intrinsic level. From a purely definitional point of view, if it doesn’t suck, it’s not really jogging. Every other form of bipedal locomotion – sprinting and walking for example – doesn’t really suck at all. Here’s what the continuum looks like graphically:

Why has the jogging delusion persisted for so long despite the above continuum? My hunch is that we’re wired to assume that we need to “take our medicine.” In other words, no pain, no gain. It’s as simple as that. Now, in any type of bell curve, there are always a few outliers. Which brings me to a second potential benefit of jogging:

If you’re a strong guy who weighs over 200 pounds, I’ll give you a moment to wipe off whatever you were just drinking from your computer screen. But, for the rest of you, if you’re weighing in at about a buck 60 or so, you might actually “enjoy” jogging because it’s not as painful for you as it is for your heavier peers. At least in principle, any physical activity is better than being sedentary, so if jogging is what you like to do, have at it… I guess.

Okay, here’s my justification behind that insensitive comment that got everyone’s panties in a wad. While gender is biologically determined, the concept of masculinity is a socially constructed notion. And while the idea of masculinity varies somewhat from era to era and from one region of the world to another, masculinity is usually associated with superior strength, muscularity, speed, and power. The human body, as it turns out, isn’t a very good multi-tasker when it comes to “S.A.I.D.” (specific adaptation to imposed demand). It prefers to be either big and strong, or small and weak, (albeit with good endurance). True, some guys can manage to have it both ways, but if you find it challenging to gain muscle or strength, you’re not one of them.

Jogging, as the bulk of studies have repeatedly shown, reduces, or at the very least, makes it more difficult to maintain or develop all of the masculine traits I just described. This is why national and World-level powerlifters and weightlifters – most of whom are jaw-droppingly jacked and three times stronger than you are – rarely jog or do anything resembling it. Maybe you’re willing to risk minimizing your manhood to obtain the supposed benefits of jogging. I’m not, and here’s why.

Your Argument Is Invalid. Really.

“But fighters jog all the time! They have to get into shape for the ring!” 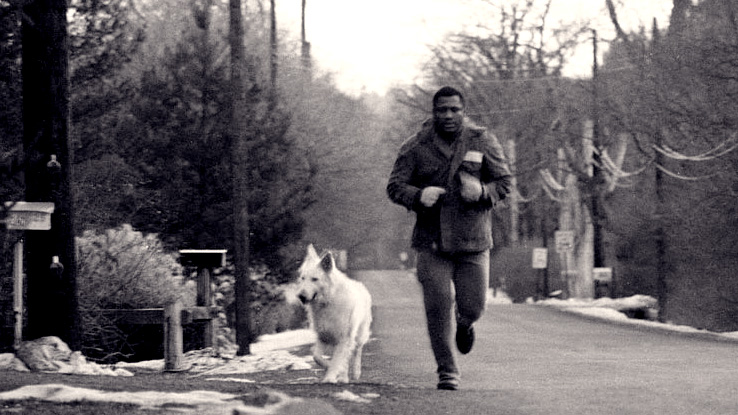 Well, having worked with a few fighters that you might have heard of, I agree – most fighters do jog a lot. Here’s why this happens: If you’ve ever done any competitive fighting yourself, you know how horrible it is to be completely out of gas with your opponent coming down on you like a ton of bricks. It’s like drowning, only worse. So fighters, as a rule, train for endurance as if their lives depended on it. This training, all too often, takes the form of jogging.

While I don’t question the need for a high level of endurance if you’re a fighter, there are far better ways to get the job done. In fact, almost anything is a better way – sparring/rolling, footwork drills, focus mitts, bag work, skipping rope, rowing, high-rep kettlebell swings, sled pushing, circuit training, Crossfit WODs, my own Escalating Density Training… the list is endless. But the bottom line is, considering all the options, jogging is probably the least beneficial from a benefit/drawback point of view.

So why do fighters still jog? For the same reason that many people think eating saturated fats will clog your arteries – dumb, unquestioned tradition. When you hear something often enough (or see it being done), you eventually come to assume it must be true.

“But what about cardiovascular health?”

I think cardiovascular health is pretty cool too. The only point of difference is that I maintain mine through weight training instead of jogging. As Dr. Fred Hatfield pointed out decades ago in his groundbreaking text, Power: A Scientific Approach, weight training is a far better tool for improving overall cardiovascular health than jogging. Hatfield makes special note of weight training’s ability to improve the ejection fraction of the left ventricle, something jogging simply can’t accomplish.

And remember, in terms of real-life functional capacity, jogging isn’t, well, real life at all. Think about it: Aside from the times you may have jumped on a treadmill, raised your heart rate to the “fat-burning zone” and then kept it there for a prolonged period of time, when has your body ever experienced “aerobic training” in your actual everyday life? The answer is almost never. Aerobic exercise is a completely artificial construct.

It should finally be noted that people have maintained excellent cardiovascular and overall health without doing any type of training whatsoever. With good nutrition, an active lifestyle, and good stress-management skills, training really isn’t needed if you simply want good health.

“But you have to run or you’ll get fat! Jogging is the best way to lose fat!”

This common misconception comes from widespread misinterpretation of some old studies suggesting that people tend to burn more calories during aerobic exercise than with anaerobic training. While the conclusions of most of these studies were accurate, they weren’t really looking at the most practical parameters. In truth, while anaerobic forms of exercise (such as lifting and interval training) burn fewer calories during exercise, if you consider total calories burned – both during and after training – anaerobic training wins by a mile. The reason why Dr. Tabata’s interval training subjects lost more fat than the aerobic subjects is that interval training burns significantly more calories overall.

Going back to the “any activity is better than no activity” argument for a moment, here’s perhaps the most important reason why it doesn’t hold up in real world terms. Training requires the expenditure of resources – time, energy, calories, orthopedic health, recovery processes, etc. And these resources are in fact limited.

Quite often, an activity isn’t all that harmful in and of itself, but because it takes the place of something else that’s much more beneficial. Jogging is just such a case in point. So if you’ve got a good resistance-training program in place and you enjoy jogging a bit for whatever reason, I don’t think you’re in need of professional intervention. But – and there are many, many people in this category- if you think jogging is a superior form of exercise for fat loss, or health, or overall functional fitness, the evidence simply doesn’t agree with you.

So, no, jogging isn’t going to turn a man into a woman, at least not in the literal sense. But I’m fighting against decades of unquestioned tradition here, and sometimes I find myself needing to take extreme measures to get people’s attention. If you’re a former or current jogger, I’d love to hear your thoughts on the subject, especially if you think I’ve got it all wrong. And, if you’ve been trying to convince a buddy to kick the habit, I hope you’ll share this with him or her.

Old, outdated notions die hard, but they can be defeated!