I’ve been experimenting with EMOM sets, or every minute on the minute sets, since the 1990’s. I always thought this method was effective, but it’s only recently that I’ve figured out how to use it optimally.

EMOM training entails doing a set of an exercise, often a single or double, every minute for between 10 and 20 minutes.

There’s something very interesting that occurs during an EMOM set, and I’m not completely sure how it happens. During the set, as fatigue builds, you’re still able to continue making the lifts, set after set. If anything, sets become even “easier” after the 10-set mark.

Due to fatigue, you’d think you should be getting weaker, and you might even be able to notice you’re not moving the bar quite as fast as you were when fresh. But in spite of this, you’ll continue making the lift and feel it becoming easier as you progress through the sets.

The reason you feel the lift becoming easier is because it actually is becoming easier. As sets progress on and fatigue builds, antagonistic muscle groups shut off more completely, which increases flexibility and makes it easier to get under the bar. Your body instinctively migrates toward a more fluid and technically efficient movement pattern. And using more efficient movement to lift the weight makes the weight easier to lift.

I’ve had over 100 top weightlifters do EMOM sets, and I’ve observed this phenomenon in almost all of them. Often it’s most dramatic the very first time a lifter does an EMOM set. This is odd, because with most training modalities you have to practice them for a while to notice performance improvements. But EMOM sets do something very unique and special.

Performing EMOM sets trains the body to fire motor units faster, more explosively and more powerfully, and to turn them off quickly, which is the holy grail in sports. This training modality is more effective at accomplishing this than anything else I’m aware of.

I first picked this idea up from Louie Simmons at Westside Barbell in the mid 90’s. At that time I was still competing in powerlifting. Like a lot of lifters, I called Louie to see if he could offer me any advice in getting my stubborn deadlift to move. His solution was EMOM sets. It worked so well that when I made the switch to weightlifting I brought EMOM sets with me.

I found that EMOM sets had an even more useful role in weightlifting. The reason being, you have to perform the snatch and clean and jerk with at least 80% of your maximum for it to be useful technical practice. This is because what you’re really doing in a lift like the snatch is a system comprised of both the weight of your body and the weight on the bar. And this system acts differently if the bar part of the equation is less than 80% of your max.

Everything changes as the weight gets heavier, even the position that your body has to attain in order to successfully perform the lift. So practicing with 50% of your maximum weight just isn’t very useful in the sport of weightlifting. It’s simply a fact that lifters are forced to train with at least 80% for the training to be relevant from a technical standpoint.

So the minimum is 80%, but there’s also an upper limit. For most athletes, the practical upper limit is 95%. Only under very specific conditions can a lifter approach 100% of his max. Even then, it’s not for more than the occasional single. And therein lies the dilemma.

So most of the time, an Olympic weightlifter trains between 80% and 95%. So competitive weightlifters have to find a way to practice both lifts at these intensities with enough volume and frequency to stimulate the body to grow. And just as important, you have to be technically “correct” enough to keep performance sharp.

Weightlifters usually don’t do reps higher than doubles, maybe triples on rare occasions. Doing too many reps per set, or too may singles at too high of an intensity, will cause a real breakdown in the performance of the lift.

So you can see how EMOM sets are a perfect solution for effective, high-performance training. In fact, when performed correctly, EMOM sets provide better technical practice than doing singles with your max, using as much technical mastery as you can muster. 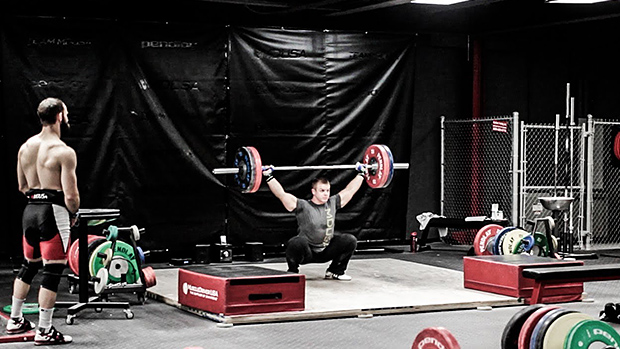 EMOM sets actually improve technical efficiently as the set goes on. I believe they also change the speed at which fatigue builds during a set. During a normal set of 5, for example, fatigue builds quickly from the first rep to the fifth rep, and your form and technical mastery deteriorate right along with your strength.

The deterioration of technical mastery might actually be as much or more of a reason for you failing a rep than the temporary loss of strength due to fatigue. On a maximal set of 5, by definition you will fail with the sixth rep. But even though you’re getting rep 3, 4 and 5, your technique won’t not be optimal, which is a performance killer.

In other words, on a really heavy set of 5 the first rep or two will probably be technically pretty good, but chances are, the remaining 3 aren’t going to be great. And doing two good reps then three progressively worse reps is not a good way to train.

On the other hand, doing a set of 10 EMOM reps you’ll perform all reps with good technical efficiency, which is an ideal way to train.

How to Add EMOM Sets To Your Training

If you want to add EMOM sets to your training, choose lifts that require a lot of motor control and balance or utilize large muscle groups of the body, like snatch, clean and jerk, power clean, high pull, deadlift, bench press, and squat.

Begin with a weight that’s around 70% of your max and use a clock to time the reps. It’s important to perform a set of 1 or 2 reps every minute, then rest for the remainder of the minute. If the weight feels really light after the first 5 sets, add only a pound or two to the bar.

I can’t emphasize this enough – the biggest mistake you can make is to add too much weight all at once. I recommend keeping some 1-pound plates on hand. Increasing the weight very slowly is one of the keys to making this method work.

Warning: If you try this for the first time on squats, get ready to feel like you’ve been hit by a truck the next day!