Most people think fat loss requires boring cardio and bland food. That can work of course, but there's a better way to torch fat.

We'll get to the workout plan, but first, a little science. Actually knowing this stuff will make you WANT to do it.

What does explosive training have to do with fat loss and body composition? These three things:

Explosive training plays a nifty role in fat loss. The holy grail of physique transformation is to build muscle and burn fat. Insulin sensitivity is often the crucial component that'll help with both.

A study published in Diabetes and Metabolism Journal found that explosive forms of training expand the storage capacity for blood sugar in your muscles and improve insulin sensitivity (1). This happens because your muscles post-training are depleted of glycogen (the primary fuel used for high-velocity muscular contractions) and are ready to eat up some more.

Think of it this way: every muscle in your body is made up of bundles of muscle fibers with motor neurons attached to them. Motor neurons are like an electrode hooked up to each muscle, and when they receive a signal from the brain for your muscle to contract, they do.

In many cases, the more muscle fibers you stimulate, the greater the potential training effect of an exercise. This can help you maintain or even build strength despite getting leaner.

During fat loss phases, the greater the training response may help you counteract the catabolism of muscle tissue. In layman's terms, lifting heavy and explosively can prevent you from losing muscle.

During fat loss phases, the goal – especially with heavy and explosive training – is to preserve as much lean muscle as you can for both metabolic function and aesthetics.

Although there are a bunch of ways to get explosive, jumps are pretty darn convenient. They maximize muscle fiber recruitment and prime your body for maximum workout performance.

These jump movements bring dormant muscle fibers to life, improve your explosive power, and improve the efficiency of your motor system so that you can both activate and train more muscle – every time you train. This translates to more productive workouts.

Practice jump movements at the beginning of your workout on a lower-body training day. They'll act as an extended warm-up and prepare your central nervous system for better muscle fiber recruitment, strength, fat-burning, and power during your workout.

If you haven't jumped in a while, start with static box jumps. Quality trumps quantity every time, so it's best to reinforce optimal takeoff and landing. Do each jump variation for two weeks during your lower-body training day to build explosive power.

There are three-phases to achieve the perfect jump:

Set up with feet about shoulder-width apart in an athletic stance and arms up at chest height. Swing the arms while flexing at the hips and knees and load up the legs. Note: Static jumps will start in the loaded, quarter-squat position with the arms cocked back and ready to swing.

Immediately after loading, swing the arms with the jump, driving off the legs and pushing the hips forward. Aim to jump both out and up, because adding a vertical component to the jump reduces shear stress on the knees. Bring your feet and arms back in front of you in preparation for landing.

When you do these jumps, keep the following tips in mind:

Feet should be flat when you land.

Keep your weight distribution even instead of going mostly to your toes causing you to tilt forward.

Knees should be neutral.

Avoid landing in valgus (collapsing inward) or varus (diving in or diving out, respectively) positions. This prevents shredding your knees.

Don't allow your back to round. Any weakness in trunk position shows a power leak that reduces explosive power and opens the door for greater stress on the hips, knees, and ankles.

Keep your head up and chest up.

If your head and neck drop when landing you'll lose trunk position and fold over. This leads to a breakdown in form from head to toe, decreasing performance and opening the door for injury.

Pause and hold position at the top of the jump to reinforce optimal landing position.

When you increase workout density you're increasing the amount of work performed while decreasing the time you give yourself to do it. The goal is to up your caloric expenditure, the metabolic stress placed on your muscles, and the overall metabolic demand on your cardiovascular system.

Essentially, your goal is to fit more reps into a pre-set window of time than you did during set 1. For instance, if you're performing a bodyweight density circuit, it could look like this:

Here's how they work:

Each workout should consist of 2-3 individual circuits. Each circuit is repeated twice, for a total of 4-6 performed circuits.

Exercises in the circuit should use major movement patterns. This means squats, hinges, presses, pulls, lunges, and carries. Each circuit should have no less than 3 but no more than 6 exercises.

You can do both weighted and bodyweight circuits to get the most out of this training method.

You can tack density circuits on to the end of your workout, or even make them a workout in themselves. First, let's look at weighted density circuits. You can use classic set and rep schemes to determine the work load of each exercise, or use timed circuits.

Do A1 for the reps listed during the exercises. Rest the given time and move to the next exercise. Continue this pattern for all exercises, taking the allotted rest time after you've done one set of all exercises. Rest 120 seconds after the entire circuit and repeat.

For your second circuit, increase the weight by 10-20% and repeat the movements, trying to match or exceed the number of reps in that same work duration.

This is similar, but instead of increasing weight, you'll try to increase the amount of reps you complete for the allotted time.

Do A1 for as many quality reps as possible during the duration. Then rest and write down your reps for that movement. Afterwards, do A2 the same way. Continue this pattern for all exercises. Rest 120 seconds after the entire circuit and repeat.

There's no way around it; basic compound strength training still needs to be a primary focus while torching fat. No, you won't necessarily smoke personal records, but it's important not to turn every workout into a box-jump competition followed by circuit training.

Even during periods of fat loss, I recommend at least one day of heavy lifting (75-95%) 1RM of a major multi-joint exercise like squats, deadlifts, or bench presses.

There are many moving parts covered above. Here's how to sequence them into a straightforward and devastatingly effective workout.

Try these two types of high-powered training methods and instantly start improving your fat-burning potential. As an added perk, you'll stay strong and maintain muscle mass while working at a caloric deficit. So dig in, work hard and enjoy the results.

The squat may be the king of all exercises, but it's also the one that's screwed up the most. Are you making any of these mistakes?
Bodybuilding, Powerlifting & Strength, Squat, Training
Eirik Sandvik October 5 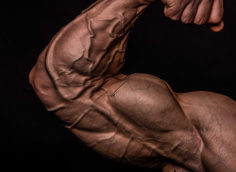 Never curl in the rack... unless you're using overcoming isometrics to build bigger, stronger arms. Here's how to do it.
Training
Dan North June 13