You may or may not be a mystery reader. Regardless, you've probably heard of the greatest sleuth of all time, Sherlock Holmes. Unfortunately, Holmes had a little habit that, today, would likely have qualified him as a Jeopardy answer in the category, "Guys Who Have Bunked With Dan Duchaine in Prison." You see, Holmes was an opium addict, and he was partial to a very precise mixture which he called the seven percent solution.

Well, I too have my own version of the seven percent solution, only it has nothing to do with illegal opiates. Instead, it has to do with rep schemes. I call it my Five Percent Solution. Let me elaborate.

There are a lot of effective rep schemes, but the fact is, they're only as good as the time it takes you to adapt to them. For beginners, a particular workout, coupled with a particular rep scheme, might guarantee progress for 4 to 6 weeks. After that, they'd be performing the exercise equivalent of getting stuck in a revolving door. Advanced athletes, on the other hand, might have to change their programs every week. Some even have to change their program every single workout!

Although some experts promise a lifetime of continuous results from doing the same routine day after day, ad nauseum, it's a cruel lie. Not only will your body adapt, but you'll probably quit because you'd be bored silly. For instance, one infamous trainer exhibits a fanatical obsession with one training method his to the exclusion of all others. His system requires only a fraction of the time required by most other programs, but it's difficult to do it for more than a few weeks because it requires that the trainee be either mentally disturbed or addicted to amphetamines in order to keep up the degree of effort required.

I recommend variety, of course, but there are some set-rep schemes that I tend to favor over others. I like them because they're mentally stimulating and physically challenging. Moreover, I like them because they're effective. One in particular is the aforementioned Five Percent Solution. It's effective regardless of where you are in the bodybuilding hierarchy. You can be a rank beginner, or master of the universe. In short, it gets your heart rate going and your muscles growing.

The Five Percent Solution involves a set pattern of progression. In a nutshell, you'll increase the amount of resistance by 4 to 5% each workout, while simultaneously reducing the number of reps by one each time. After you recover from the sixth workout, you'll have increased your strength in each lift by approximately 10%!

People in the know in the field of strength training realize that the number of reps is the loading parameter to which an individual adapts the fastest, and the Five Percent Solution takes advantage of this fact. I'm sure people like Tony Little have no idea what I'm talking about, but no matter. The Five Percent Solution is based on the principle, "success breeds success".

Before I give examples of the workout, let's talk about the loading parameters of the Five Percent Solution.

Select a 3-rep bracket to start the cycle. The number of reps should fall between 3 and 8. For instance, choose to do sets of 3-5 reps, 4-6 reps, 5-7 reps, or 6-8 reps. The decision is somewhat arbitrary; just make sure you write down the rep bracket you selected and stick with if for the duration of the program.

In order to allow the phosphagens to replenish and give the central nervous system enough time to recover and be able to activate the high-threshold fibers again, you need to rest 3 to 4 minutes between sets.

It may be difficult for many of you to take that much rest, but believe me, your discipline will pay big dividends in the long run. In fact, failure to take adequate rest between sets will negate the positive effects of this program. I recommend using a stopwatch that beeps after the rest interval is over. As a note, strength athletes generally rest between 4 and 5 minutes after sets of the Power Clean or other Olympic lifts. The technical element of these lifts is much greater than that of conventional lifts; thus the demands on the nervous system are much greater.

I don't recommend doing more than 1 to 2 exercises per body part because you'll be doing a high number of total sets. Of course, the odd genetic freak or the steroid assisted athlete might be able to handle 3 exercises.

I recommend that you select compound exercises that recruit a lot of muscle mass. Therefore, exercises like rows, squats, deadlifts, or presses are the best choices for this method. Hopefully, you can use at least 100 pounds in a given exercise because it makes the math easier. It also makes it easier to change the weight since 1 1/4 pound plates are a rarity. Of course if your strength levels are low, you can always use PlateMates or Record Disks to meet the 4 to 5% weight increase.

Work every body part once every 4 to 5 days. Here's one possible split:

This program is designed to be used for 6 workouts per body part.

Do your initial workouts with the chosen number of reps and the predetermined weight. You'll then increase the load by 4 to 5% every workout for two workouts in a row. Concurrently, you'll also reduce the target reps by one rep for every weight increase. Then, after the third workout, you'll reduce the weight 4 to 5% but bring the number of reps back to the original starting point. If you've done this correctly, you'll have increased your strength by 5%.

If you're confused, I don't blame you, so let me offer an example:

Let's say you have a weak brachialis muscle and you want to improve your reverse curl strength. And, for the sake of this example, we'll say your best performance for the reverse curl is 100 pounds for 7 reps. This is what your rep/set cycle would look like:

By logical extension, if you did workout 7, you'd now be able to do 7 RM (repetitions maximum) with 110 pounds! That's a 10% percent increase in strength over 6 workouts, and that's excellent! (I don't actually map out the seventh workout because it would just be an exercise in vanity-the nervous system typically adapts to any workout program in 6 workouts and after that, it's time to move on to another type of program.)

Obviously, because of neuromuscular fatigue, you won't be able to achieve your rep target every set, but as long as you hit your goal on the first set of every workout, you're doing fine.

Biomechanists have determined that when you do a squat, you're in fact squatting 75% of your bodyweight, plus the load on the barbell (Although it seems like you're squatting all of your bodyweight, you're not. After all, the legs are lifting the upper body; they're not lifting themselves off the ground). Keep that in mind when you adjust your squat poundages up by 5%. For instance, let's say you weigh 200 pounds and you're squatting 350 pounds for 5 reps. When increasing the weight five percent from workout to workout, the load increases would look like this:

So, in this particular case, a 5% increase would bring our hypothetical 200-pound bodybuilder's load to 375 pounds for his sets of 4 in his next workout.

Tips for the Five Percent Solution

In order to perform this program properly, I strongly urge you to keep a detailed journal of the exact number of sets and reps performed, load used, and rest interval taken. Furthermore, only count the reps done in strict form. Go ahead and do forced reps for the last rep of every third workout, but don't count them as complete reps.

I hope that the Five Percent Solution isn't too confusing. I think that you'll find it well-worth all the head scratches and furrowed brows it took to figure it out, though. If enough of you find that you like it, let me know and I'll fill you in on the Advanced Five Percent Solution.

In any event, if there's such a thing as one singly unifying theory of training as Mike Mentzer claims, it's that the best system is the one that constantly changes. As your body adapts, it's recovery ability increases and higher levels of volume and intensity of training are needed to ensure further growth. 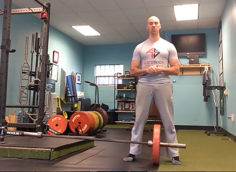 There's a better exercise to build your back. Safer too. Check it out.
Tips, Training
Dr John Rusin December 17
Today, competitive bodybuilding is a freak show. From the late 1960's to the early 1980's - the Golden Age of bodybuilding - it was an art exhibit.
Training
Chris Shugart March 15

Alwyn Cosgrove kicked cancer's ass. Twice. Of course, those of us who know him expected nothing else. Find out what makes this remarkable guy tick, or more importantly, find out what ticks him off.
Training
Nate Green November 22