Back in high school I was hung up on getting a six-pack. In fact, other than wanting to “bulk up,” achieving a chiseled set of abs was probably my number one “fitness” goal.

Though I probably spent as much time looking in the mirror and fantasizing about my soon-to-be-attained six pack as I did actually training (not to say anything of the foolishness of wanting to bulk up and get abs simultaneously), when I did work on my abs, it was crunches, crunches, and more crunches.

I was doing hundreds every day – and only had two abs at the top of my stomach to show for it. It wasn’t until years later when I stopped doing isolation exercises (and cleaned up my eating) that I finally started to make significant progress with my core training.

So what makes for an effective abs exercise? To answer that question, you must first understand the role the abs play in the musculoskeletal system.

The rectus abdominis function primarily as a stabilizer muscle – they keep your torso upright while you’re standing, walking, or performing other movements.

For this reason, the best way to work your abs is to use them to stabilize your trunk in difficult positions. The less leverage you have when supporting yourself in these situations, the harder the abs must work to keep the body aligned.

A basic plank is one of the simplest examples of this type of exercise, but that’s only the beginning.

While best known as a trademark move of legendary martial artist Bruce Lee, the dragon flag has become a popular training tool amongst bodyweight training enthusiasts as well as hardcore lifters in the know. 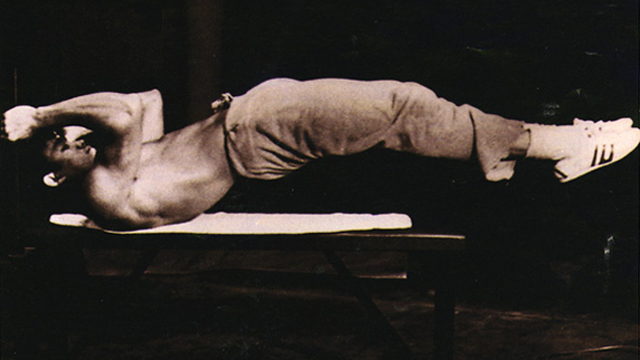 A dragon flag is typically performed lying face-up on a bench or on the ground with your hands grasping a sturdy object behind you for support.

From here, the objective is to lift your entire body up in a straight line, stacking it vertically over your shoulders, then slowly lower back down until parallel to the ground and repeat.

The aim is to keep your body straight, so do your best to avoid bending at the hips. Your abs will have to provide extreme stabilization to do so. In fact, you’ll also need to engage your lower back, glutes, and other trunk musculature to maintain your form.

Though the dragon flag emphasizes the abs, it’s really a full-body exercise.

Like many great exercises, performing a proper dragon flag takes practice. You might even need to do some remedial work before you’re ready for it. I recommend you begin by working on straight leg raises while lying on your back. Go slowly and don’t swing your legs or allow your lower back to arch.

When you reach the point where you can do multiple reps without losing form, you’re ready to work on the dragon flag. Start by practicing the negative (lowering) phase of the dragon flag first. Kick up into the vertical position, and then try to lower your body down as slowly as possible.

Once you get confident with negatives, try doing a static hold at the bottom with your body hovering an inch or two over the bench. When you can hold this position for 2-3 seconds, you’re ready to start working on full dragon flags.

While some will be ready to jump in at week 5 or 6, others will need to stick with each phase for longer than two weeks. Progress doesn’t occur at the same rate for everyone, but if you’re patient and persistent, your day will come.

One more tip: when performing a dragon flag, focus on using your abs, lower back, and glutes to control the movement. Your hands are there for support, but don’t pull the bench into the back of your neck!

Instead, use your core strength to roll up onto your shoulders. Otherwise you might find yourself “dragging” the next day from a stiff cervical spine.

Once you get the hang of performing dragon flags for reps, you can continue to find new challenges. Performing a dragon flag with just a vertical pole behind you instead of on the ground or on a bench is one such challenge.

Of course, there’s also the dreaded front lever, as well as the lateral chain version of the dragon flag, more commonly known as the human flag. No matter how strong you get, there are always new ways to shock your body into further growth.

Watch the video below for more:

Have fun training the dragon flag!