Your Deadlift is Ugly

I've come to one certainty about the lift: Not all of them look the same. I haven't always encouraged all of my clients to deadlift. Some of them were just too ugly, especially at the bottom (the deadlifts, not the clients). Actually, the ugliness occurred almost exclusively at the bottom.

My typical response was to regress them to a Romanian deadlift while we worked on improving other factors. Then we'd go back to deadlifts and see how they look. For some, the result was excellent and there was much rejoicing. For others, the deadlift graduated from ugly to unattractive, but was still far from awesome. Some didn't improve at all.

Even among the excellent, the result wasn't always long-lasting. We sometimes corrected the deadlift at one weight, but once the weight increased to a certain point, a little bit of ugly crept back in. Nobody got injured, but I did have some clients complain of lingering soreness in their low backs. I could see why. The back was straight when they set up, but it looked like the first pull occurred in the lumbar region.

Then I tried something. I pulled out a pair of ten-pound bumper plates, put them flat on the floor, and set the loaded bar on top of them. For some lifters, the transformation was immediate. No more lingering low back soreness and I could no longer see that first lumbar pull. 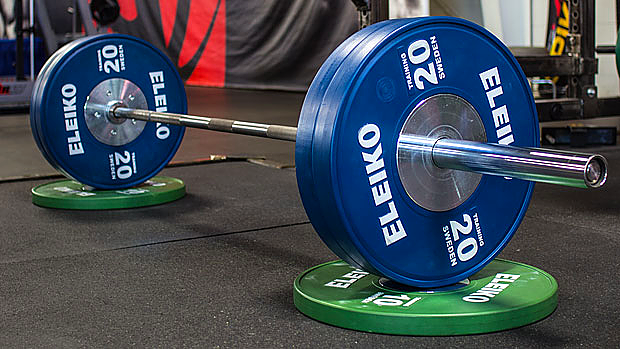 For athletes where a ten-pound plate wasn't enough, I went with twenty-five pound bumpers, and in a couple of cases, forty-fives. And one by one, the ugly deadlifts became swans. And all were performed without lingering low back soreness.

The success of these plate-on-the-floor adjustments led me to question the notion of pulling from the floor because "the floor" is determined by the diameter of a forty-five pound weight plate. Of the big three lifts, the deadlift is the only one where the range of motion is determined by a manufacturing decision instead of by individual anatomy.

My clients range from five feet nothing to 6'4", and they should all pull from 8.75"? What is that height even based on? The answer wasn't easy to find.

Why Are Weight Plates the Same Diameter?

After much sleuthing, I finally got in touch with Dr. Jan Todd who came to this conclusion: A bar loaded with standard 45 pound plates is 8.75" off the floor because the original manufacturers wanted there to be enough room that if a lifter doing Olympic lifting fell with the bar overhead that the plates would be tall enough so that his head would not be crushed.

So, the diameter of a 45 pound plate is based on the diameter of Olympic plates, which are designed to prevent skulls from being crushed in a missed Olympic lift. As an engineer as well as a trainer, I'd say that's a great design decision... at least for Olympic lifting.

But what does it have to do with deadlifts? Is a one-skull deadlift really better than a 1.25 skull deadlift?

It's Not Weakness, It's Geometry

Once I learned that "from the floor" is an arbitrary designation with respect to deadlifts, I stopped being as concerned with getting my clients to the point where they can pull from the floor.

This new information piqued some additional curiosity. I wanted to understand what differences affected my clients such that some could pull from the floor while others needed a one to four-inch rise. And why could some of them get into a high hip deadlift without trouble, while others felt unnatural in anything but what looked to me like a squat-lift?

So I did what any decent engineer would do: I took some measurements. I measured the limb lengths of 27 of my clients from the following areas:

I compiled the data and expressed the measurements as a percentage of height (represented by combined shin, thigh, and torso) so that I could get relative limb lengths to see if I was just finding out who was taller.

An 18% difference between my short and long-torsoed clients is enough to affect how well they can lift something that's exactly 8.75 inches from the floor.

I also incorporated my own observations. I found two notable relationships between deadlift form and relative limb length:

This may potentially explain why more of my male clients pull from the floor than do my female clients, as men typically have relatively longer legs than do women.

I still wanted to understand the different positions I saw, so I input these numbers into Adobe Illustrator where I created to-scale lines representing each limb, and then I tried to draw each person's deadlift using those to-scale lines.

Some of the results surprised me. For some clients, I couldn't get their bones to fit together in a high-hip deadlift position without losing the "hip bone's connected to the thigh bone" integrity. It's not a stretch to suggest that if it's not possible on paper, it's not possible in person. Or at least not without bending one or more of those line segments. That was the moment when I became more open to the "squattier" deadlift position. 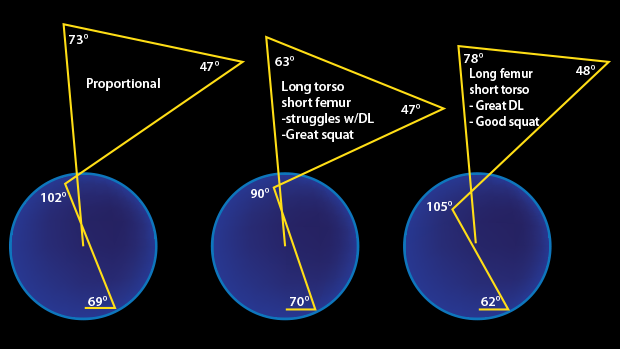 The stick diagrams above show what the deadlift setup can look like for three of my clients with very different limb lengths. I tried to make them all look the same, but I was unable to because the lines just wouldn't connect.

This exercise yielded one other interesting finding: Raising the deadlift bar didn't necessarily increase the ability to do a high-hip deadlift. It did improve the deadlift, but it did so by reducing the hip flexion range of motion the client needed to get into position at the bottom.

So, Should You Deadlift From the Floor?

If you can do it with great form and without low back pain, then yes. And of course if you're a competitive powerlifter, then you don't really have a choice.

Cressey's 2009 lessons-learned include the perfect sleep schedule, why shoes suck, and why you may want to stay away from hyper-mobile chicks.
Motivation, Training
Eric Cressey February 24

Testosterone is about to unveil a very cool new feature called "The Physique Clinic." This is where select T-Nation members will be personally coached by Christian Thibaudeau so that they can finally achieve their physique goals.
Training
Chris Shugart November 26