When the glutes aren't doing their job, muscle function and movement mechanics in the hips – as well as strength, power, mobility, stability, posture, and athletic performance – suffer. Here are a few signs that indicate weak or dormant glutes.

There are specific tests you can use to self-assess glute function. If you can successfully perform these tests, chances are your glutes are firing as they should. If not, you'll want to address the specific weakness.

If any of those tests or warning signs expose a weakness, there are several things you can do to improve your hip and glute function.

The stretched or hinge position ensures the glutes and hamstrings are capable of lengthening through a full range of motion, which is perhaps the single most important factor when it comes to glute function.

In fact, once an individual is capable of eccentrically activating their glute muscles by allowing them to fully lengthen during hip flexion, powerful glute contraction will automatically occur during hip extension. This is due to several neuromuscular mechanisms including reciprocal inhibition, agonist-antagonist co-contraction, and muscle spindle-induced alpha-gamma coactivation.

Axial loaded hinge movements such as variations of Romanian deadlifts, deadlifts, and good-mornings will emphasize eccentric lengthening of the glutes and hams. To maximize the effectiveness of these exercises, do them in an eccentric/isometric fashion using a slow negative and a 3-5 second pause in the stretched position. This will do wonders for hip function and glute strength.

Targeting the hips using movements that emphasize the contracted position is important for isolating the glutes and creating a strong mind-muscle connection in the posterior chain. Besides triggering strength and hypertrophy gains, understanding how to squeeze and contract the glutes is a highly effective method for waking-up these oftentimes neuromuscularly complacent muscles.

Variations of glute bridges, hip thrusts, and reverse hyperextensions are great movements for targeting the glutes in the fully contracted position.

The cable pull-through is one of the most conducive exercises for learning and mastering hip hinge mechanics. The load vectors match the anatomical function of how the glutes activate.

Rather than loading the hips axially with vertical forces, the pull-through relies on horizontal forces through anterioposterior loading, which matches the force vectors of how the glutes actually function. As a result of working directly against forces that want to flex your hips, this pulls the body into ideal hip hinge mechanics. In addition, this is one of the few hip hinge movements that involve significant tension in both the stretched and fully-contracted positions.

A few small modifications can make the pull-through even more effective. First, instead of placing the cable pulley at the lowest notch, try elevating the setting to approximately a foot above the ground. By elevating the setting so that the cable is approximately parallel to the floor during the movement, it eliminates vertical forces and emphasizes horizontal loading vectors, all of which further exaggerates hip and glute activity.

Lastly, because the pull-through is so effective at teaching proper hip hinge mechanics, incorporating an eccentric isometric at the bottom, as well as an additional pause in the top, will do wonders for reinforcing ideal hip flexion and hip extension mechanics.

Make sure your back and spinal stabilizers are strong enough to keep you in proper spinal alignment during squats, deadlifts, and hinges. In addition, focus on strengthening the lats and improving overall posture. When posture is ideal, it allows the hips to fully flex in the stretched position.

As a result, the glutes are fully elongated during the eccentric phase, thereby maximizing the amount of power and torque the hips can produce on the subsequent concentric movement. In other words, proper spinal alignment is key for hip and glute function. Without correct postural mechanics, achieving strong activation of the glutes becomes nearly impossible.

Lack of innervation to the feet and ankles minimizes signalizing and recruitment throughout the kinetic chain, especially to the hips. If you have weak feet and ankles, it's going to be difficult to target the glutes. Besides going barefoot or wearing minimalist shoes, there are numerous drills that can be performed. Any single-leg stand variation, such as the single-leg kettlebell swap, is excellent for improving strength and function.

When it comes to strengthening the posterior chain and improving hip function, swings with kettlebells or plates are tough to beat. Because of the significant deceleration component involved in the stretched position, the eccentric phase of swings increases innervation of intrafusal muscle fibers.

Want to ramp it up? Either have a partner manually push and accelerate the kettlebell on the down phase, or use a resistance band to exaggerate force absorption. The band-resisted variation is also a great way to add constant tension throughout the entire movement, including the fully contracted position.

Keep the hips back during the eccentric phase of all leg movements. Whether it's squats, hinges, deadlifts, lunges, or any other lower body exercises, posteriorly setting the hips back activates the glutes eccentrically, which is critical for force absorption as well as hip activation on the concentric phase. Allowing the hips to shift forward on the eccentric portion compromises activation of the glutes, thereby stressing the joints and minimizing overall force producing capabilities.

By eliminating valgus knee collapse (inward collapse of the knees), you'll immediately improve activation and function of the glutes. When the knees and feet collapse or rotate inwards, the glutes and hips lose significant contractile capabilities. To avoid this, think about screwing your feet into the floor and pushing your knees outward so that the ankles and knees are stacked.

Also think about spreading the floor with your feet, especially during lower body movements and standing exercises. Besides increasing activation to the larger gluteus maximus muscles, resisting adduction also enhances recruitment of the smaller hip muscles. A simple exercise to quickly address valgus knee collapse is the plate squat.

Using a stance slightly wider than shoulder width, take one or more 45-pound plates (stacked on top of each other) and place the load between your legs and squat. In order to comfortably fit the plates between your legs, you'll have no choice but to spread your knees. This is a great prep drill to perform before heavy squats as a means of grooving an efficient squat pattern into your central nervous system.

Performing some form of low to moderate intensity glute activation exercise daily works wonders. Bodyweight bridges, single-leg bridges, single-leg Romanian deadlifts with bodyweight, lunge holds, squat holds, glute extensions, and even something as simple as an eyes-closed single-leg stand is all it takes to wake up the glutes. Take five minutes daily to work on these drills.

The ability to transmit force and coordinate neuromuscular recruitment between the hips, core, and upper torso is vital for athletic performance as well as heavy strength training. The side windmill plank is one of the few exercises that requires the upper torso, core, and hip muscles to work together synergistically in one controlled high-tension isometric.

Start with both feet stacked. Once you nail the form with this basic position, try incorporating hip abduction by lifting the top leg while keeping both feet perfectly parallel to each other. Although it doesn't tax the larger glute muscles extensively, it quickly exposes and addresses energy leaks that may exist between various segments of the body, like the hips and core.

If you're looking for an immediate cure-all, look no further than eccentric/isometric single-leg hinges. Whether it's single-leg Romanian deadlifts or the highly difficult single-leg good-morning variation, these movements crush the gluteus maximus as well as the smaller butt muscles.

The only catch is that these are extremely difficult, often times requiring a base level of glute function, balance, strength, and stability before being able to do them.

Most athletes and lifters have one glute that's weaker than the other. Chances are whichever arm is your dominant one, the opposite glute and hip will have superior strength and function.

This is a result of the contralateral or "serape effect" evident in many activities such as jumping, throwing, cutting, and hitting. Fixing this imbalance can be tricky but it comes down to isolating the weak glute by performing additional unilateral hip movements such as single-leg hinges, single-leg hip thrusts, lunges, and Bulgarian squats.

Focusing on symmetrical loading (placing equal stress on each side) during bilateral movements such as squats, deadlifts, and hinges is also paramount, as one side will have a tendency to dominate. Decrease the load, close your eyes, and tune into the amount of neuromuscular tension and force each side is producing. If you concentrate on the sensory feedback, your muscles can literally feel when the loading and activation is asymmetrical. You'll gradually increase neural drive to the weaker side, eventually correcting the imbalance.

There's nothing wrong with high-bar squats. However, if you're having trouble engaging your glutes, you may want to start mixing in some low-bar squats. Due to the bar placement resting lower on your center of mass, this facilitates a slightly greater forward torso lean, thereby emphasizing the hips and glutes more effectively. Before ramping the weight up, try using lighter loads to emphasize technique and power output. It's a great way to increase neural drive to the hips while simultaneously improving squat technique.

Weighted lunges, split squats, and Bulgarian squats are incredible exercises for the glutes. Unfortunately, this is contingent on one very important factor – the ability to set the hips back. If the hips aren't in the appropriate position on lunges and similar variations, these movements actually do very little for targeting the glutes and actually do more harm to the knees.

To reinforce the idea of setting the hips back on lunge variations, incorporating a low-bar placement lunge (similar to low-bar squats) is very conducive for establishing proper hip mechanics. If you want to take this a step further, adding accommodating resistance in the form of bands is a great way to keep constant tension on the glutes.

Besides requiring deceleration and force absorption during the eccentric phase, the top position (which typically involves little muscle activation) is actually quite devastating on the glutes due to the exponentially greater tension the bands create in the contracted position.

Warning: This workout is gonna hurt. Get ready to use time under tension, multiple angles of attack, and a whole bunch of lactate.
Bodybuilding, Shoulders, Training
Christian Thibaudeau September 1
We've all been there. No matter how big and educated we think we are now, at one time or another we were small.
Training
Chris Shugart July 21 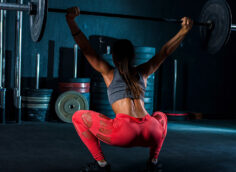 Many CrossFit women can lift a ton of weight while sporting six-pack abs without dieting. Sound like you? Probably not. Here's why.
CrossFit, Strength & Conditioning
Charles Staley July 16
There's something special about a firm and flat midsection. Your abdominals attract attention like nothing else.
Training
Christiane Lamy March 3