Besides looking like a geriatric circus act, most stability exercises do very little in terms of improving stability.

But not all stability exercises are worthless. One method that works is the Hanging Band Technique (HBT).

Simply hang plates or kettlebells from bands and attach them to the outside collars of the barbell. This produces numerous oscillations and perturbations (irregular deviations in movement) to the barbell, thus creating a very unstable environment for the lifter.

The benefits of this advanced training technique are numerous.

HBT is a combination of three unique training methods:

Studies have demonstrated the limitations of most stability training methodologies, particularly the inability to overload and fully tax the primary muscles.

HBT, on the other hand, will tax larger muscle groups. Why? Because more load can be placed on the barbell and applied to the most basic lifts. Plus, you get the three benefits above.

The stabilization benefits actually outweigh other stability training protocols because the lifter must manage three-dimensional instability from the weights bouncing up and down, back and forth, and side to side.

In comparison to WBVT, the effects are quite similar since the barbell has a tendency to continually move making the lifter feel as if his or her whole body is quivering throughout the movement.

You'll also notice the similarities to perturbation training as the weights seem to have a mind of their own. In most studies, perturbations are produced either from a specialized device or from another individual manually creating these disruptions.

In the case of HBT, the perturbations are produced from the weights moving freely and unpredictably from the barbell.

All these features induce significantly heightened levels of motor unit recruitment in both primary and secondary muscle groups.

The instability and oscillatory effects of the barbell do wonders for waking up proprioceptive mechanisms, as sensory receptors such as muscle spindles must work overtime to continually adjust to these erratic movements.

Various powerlifters, including Westside Barbell founder Louie Simmons, use a similar method when incorporating something called the Bamboo Bar. The Bamboo Bar is designed to shake and oscillate as the lifter hangs kettlebells from bands attached to the outer portions of the bar.

Another similar training tool known as the Tsunami Bar is becoming more commonplace in powerlifting and strength training circles.

Unfortunately these training tools typically have fairly low to moderate weight capacities, making it difficult to maximally overload the muscles, especially for heavier movements such as squats.

It should also be noted that few training facilities actually have these types of specialty bars. Fortunately, using a standard barbell with normal plates and bands is effective and practical.

HBT is one of the most joint friendly variations of barbell training you can do.

First, the instability and unpredictable oscillations of the barbell literally force the lifter to tighten up every muscle in his or her body and maintain this throughout the set.

Not only does this have an incredible effect on muscle activation, but it almost involuntarily causes the lifter to centrate his or her joints – aligning them optimally to support the body in the most biomechanically efficient position – or else face disaster.

In fact, professional powerlifters have used a similar approach with the Bamboo Bar to recover from shoulder injuries and promote centration of the shoulder joint during the bench press.

Besides enhancing technique and forcing the lifter into the most biomechanically advantageous position, HBT eliminates a significant amount of momentum during the lift.

The first thing you'll notice when trying this technique is how you'll naturally want to slow everything down and use smooth motions.

Bouncing, losing tightness, collapsing, or relaxing your muscles even momentarily will almost immediately cause the bar to shake and waiver uncontrollably. To offset this, everything from technique, rep speed, and motor unit recruitment has to be dialed in.

The benefits of HBT training go beyond fitness geek terminology. The effects on strength, size, and muscularity are significant because it allows you to capitalize on all three mechanisms of muscle hypertrophy.

In terms of mechanical tension, HBT training forces the lifter to fully engage all available fibers within a given muscle. This is evident even during lighter sets as anything short of near-maximal contraction will cause further disruptions to the barbell.

During heavier sets, the amount of intramuscular tension escalates, making it difficult to replicate this type of mechanical tension any other way.

HBT training also induces significant metabolic stress and metabolite accumulation as the lifter is forced to maintain constant tension throughout the set. The moment this ceases and the lifter relaxes, the barbell becomes almost unmanageably shaky.

This mimics a form of occlusion training as the muscles are continuously contracting at high threshold throughout. The amount of lactic acid accumulation, cellular swelling, muscle volumization, and overall pump you'll get from just a few sets will satisfy even the most ardent bodybuilder.

HBT training also causes muscular damage, which is the third key for inducing hypertrophy. The distinguishing factor is controlling the negative/eccentric, which happens almost involuntarily.

In fact, the way to master HBT is slowing down the negative. The lifter is rewarded for controlling the eccentric phase because the barbell will become more manageable.

Use eccentric isometrics (slow negative followed by a pause in the stretched position) in conjunction with HBT. It will maximize all facets of motor unit recruitment and muscular hypertrophy.

So, if you're looking to maximize growth with high levels of mechanical tension, metabolic stress, and muscular damage, then HBT fits the bill.

The Hanging Band Technique can be applied to almost any standard barbell exercise with the exception of Olympic lifts. However, there are certain movements that seem to fuse particularly well with this method. Here are a few of them.

Not only does it require focus and tightness, but you'll notice almost immediate improvements in technique and form.

Although HBT training is a fairly advanced technique, I can almost guarantee improvements in your squat pattern. Just remember to keep a neutral spine with the hips back, knees out, and a tight core, and avoid collapsing at the bottom.

Using HBT with a barbell lunge or split squat is one of the most physically and mentally challenging exercises you can do for the lower body. If your form is slightly off, it'll be impossible to perform them. You won't be able to control the movement.

Make sure to stick your butt out and hinge slightly at the hips. Here's one of my NFL athletes and wide receiver Marcus Davis prepping for the pre-season:

You can also perform these in a more dynamic fashion that challenges stability and coordination even further:

Out of necessity the lifter is forced to centrate the glenohumeral joint in order to eliminate instability, which packs the shoulders right where they need to be for maximal pectoral recruitment.

In fact, to sufficiently target the chest muscles, the shoulders have to assume this position whether it's for this movement or any other chest exercise.

Fortunately with HBT training, the lifter has no choice but to comply with the laws of optimal human mechanics as anything less will result in an attempt worthy of the greatest YouTube fail compilations.

Here's another one of my football players experiencing the effects of HBT training:

Splitting the load up across more bands is another way to increase the oscillatory effect of the barbell:

If you could only choose one exercise for the entire upper torso that targeted stability, strength, and size, this would be it. Combining the overhead press with the HBT is one of the more strenuous upper body movements you'll ever do.

If there's a weakness anywhere in the core or upper torso, this will immediately expose it. Focus on tucking the elbows during the eccentric phase and driving the weight up and slightly back for the concentric motion.

This is a great isometric exercise for building strength, stability, and postural alignment. By combining these holds with HBT, you'll experience a lift where literally every muscle in your body from head to toe has to be dialed in.

This is an excellent drill for overhead Olympic lifts. It reinforces a tight and stable lockout/slot position – teaching you to finish behind your ears with the hips pushed back. The carryover to Olympic weightlifting is huge.

And if you can stabilize the HBT overhead power hold, then catching a snatch or locking a jerk into the slot position will become second nature.

Although HBT training can be employed on standard deadlifts, RDL's, and good-mornings, the greatest value can be accrued with single-leg variations. If you're looking for something to light up the glutes and hamstrings, try HBT single-leg RDL's.

Bent-over barbell rows can also be combined with the HBT. Similar to the hinging movements, single-leg variations are the epitome of strength, stability, and symmetry.

Besides devastating the entire posterior chain in both upper and lower body, single-leg bent-over rows performed in the HBT fashion are one of the more challenging exercises you'll ever perform.

If you have a tendency to use excessive momentum on your rows, here's your cure.

The constant tension you'll have to create throughout your targeted muscles during sets of HBT work elicit incredible pumps as the muscle is semi-occluded throughout the set.

As a result, combining this method with isolation movements such as curls, skull crushers, and front raises is both agony and ecstasy as the level of pain is great but the results even greater.

It's not just genetics. It's that you've been training your calves all wrong. Here's how to hit them right.
Tips, Training
Paul Carter November 22
"The sheer effectiveness and brutality of the EDT program does not come across in the written word. This is a TOTAL gym experience"
Bodybuilding, Training
Charles Staley March 22 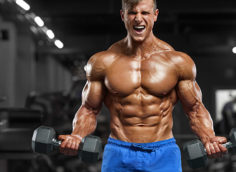