"You have to do it tomorrow and let me know how it goes," he says in his thick French Canadian accent. "You're the journalist. You're supposed to experience what you write about." Then he laughs.

I think momentarily about refuting this claim and reminding him that journalists typically don't try shit, but I think better of it and agree to try out his new leg protocol, which includes a box squat variation specifically invented for bodybuilders who want to build some serious muscle in their quads.

I've done box squats before, but never like this. Honestly, I don't know what to think, other than I'm supposed to train my upper body tomorrow and the last thing I want to do is muck it up with some squats.

But I've learned that nothing gets you more pumped to train then having to report back to one of the world's top strength coaches.

So you better believe I'll be training legs when I hit the gym.

The traditional wide-stance box squat is the exercise of choice for the powerlifter who wants to move big weights, the athlete who needs to run faster and jump higher, and even the poor schlub who needs some mass on his ass so he can sit down in a chair without sliding out of it.

But while building monstrous hamstrings and glutes is great news for a powerlifter, it's not necessarily a worthwhile goal for a bodybuilder or a guy purely interested in aesthetics.

"Sure, you want some meat on your bones back there, but not so much that it detracts from the classical V-shape," says Thibaudeau. "That's why we want to use the same principles that make the box squat a great exercise, but adjust it for the bodybuilder who wants to prime his quads for massive growth."

But what's so great about the box squat anyway?

"Besides the big weights it allows you to move, the box squat lets you start from a stretched or relaxed position, but focuses more on muscular contraction rather than the elasticity effect of the stretch-shortening cycle," says Thibaudeau.

"You're using pure muscle instead of bouncing."

According to Thibaudeau, the stretch position at the bottom of a lift — let's say the bottom of a front squat — uses elasticity to push you back up. So a guy who wants to jump as high as possible will descend into his jump and reverse the motion quickly to get the most height. The faster he goes down, the higher he'll go up.

It's the rebound effect and the box squat effectively kills it. But why is that a good thing?

According to Thibaudeau, if you only do exercises that rely on that rebound effect, your nervous system gets "lazy." And once that happens, it becomes harder to activate the fast-twitch fibers that are responsible for most muscular growth.

So while you want your muscles to contract and do most of the work, all they want to do is sit on their ass and eat Cheetos. Not too productive if your goal is increased muscle mass.

But when you've got a bar on your shoulders and you sit back on the box — provided you pause for two seconds to eliminate the rebound — you'll inhibit that stretch reflex. This makes you incredibly effective at recruiting the right muscle fibers as fast as possible.

"The nervous system is a primer," says Thibaudeau. "Once it's turned on you can gain a lot more muscle if you know what to do after it's activated."

But first, how exactly should a bodybuilder prime his quads? 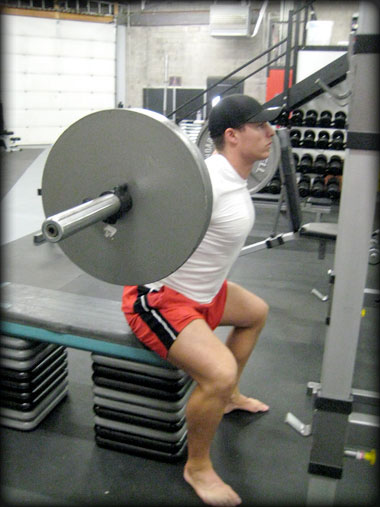 It makes sense that if you want to completely take a muscle out of the picture you need to change the mechanics. That's why powerlifters use a very wide, toes-out stance for their box squats. They want to take the quads out completely and really hammer the glutes, hamstrings, and hips.

So for the purpose of priming the quads and deemphasizing the glutes and hamstrings, it makes sense to use a narrow stance. But if you think you can just sit down on a low box with a narrow stance you're in for a very nasty surprise.

"You're going to fall flat on your ass," says Thibaudeau.

That's why you need a high box —one that comes up to your knees — which will enable you to maintain an upright torso without falling down.

The high box squat involves essentially the same set-up and execution as the traditional box squat but with a few tweaks.

Thibaudeau recommends a plyometric box or really anything that's knee-height and sturdy enough to hold a few hundred pounds. A bunch of aerobic steps works just fine. (Just make sure to grab them before the aerobics class starts unless you want a bunch of overweight soccer moms beating you with body-bars and pink dumbbells.)

Set your box in a power rack and adjust it so you only have to take two steps back before you're ready to squat.

(If you don't have access to a box, don't worry. You can also do pin squats. More on that in a bit.)

Get under the bar, grab it tight, pull your elbows forward, and take a deep breath. Once you feel "tight," walk the bar out and position your feet about shoulder-width apart. Push your hips back, keeping your core tight, and sit on the box. Pause for two seconds to eliminate the rebound effect, while maintaining that tightness. Now explode up as quickly as possible.

"Bodybuilders screw themselves up by lifting the weight under control and 'feeling' the muscle work," says Thibaudeau. "You have to accelerate quickly if you want to get the benefits of training the nervous system.

So how many reps should you do?

"First, you gotta know you can really screw up your workout by doing too much of a good thing," says Thibaudeau. "Starting from a pause like that is a real killer, so you should use a low volume/high intensity approach."

That means working up to two sets of two to four reps, at about 90 to 95 percent of your one-rep max.

"After those sets you should feel more powerful than when you first got into the gym," says Thibauedau. "If you're feeling tired, you did too many reps." 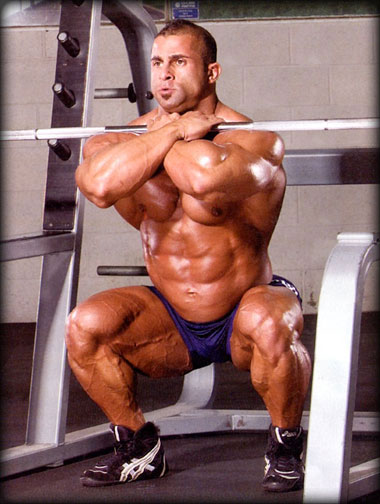 So you've activated the nervous system and primed your quads. Now what do you do?

"The front squats will be more effective since your nervous system is primed," says Thibaudeau. "We're really going to take advantage of that, hammer your legs, and force them to grow."

But if you think you can get away with a couple half-assed sets of eight to ten reps you're fooling yourself.

"Bodybuilders have neglected the low rep range and it's led to some really disappointing results," says Thibaudeau. "When I was an Olympic weightlifter, my quads were twice the size than when I was a bodybuilder and all I did was heavy front squats and back squats."

"Start with sixty percent of your one-rep max and work on being explosive," he says. "You want to increase the weight for every set so the last set of five feels like your eyes are going to pop out of your sockets."

In other words, the reps should be hard.

"But only go balls to the wall on the last set," warns Thibaudeau. "You can really kill your progress if you do two to three sets like that."

So you've done two heavy sets of four reps on the high box squat to activate your nervous system and prime your quads. You've followed that with five heavy sets of five reps on front squats and you feel like you need to lie down for a moment. Not so fast. You've got one more thing to do, bubba, and it ain't pretty.

"Take eighty-five percent of the weight you did for your last set of front squats and perform one set where you get as many reps as humanly possible," says Thibaudeau. "Most people will get ten to twelve reps, unless they throw up first."

This is what Thibaudeau calls a "maximum capacity" set. If you've effectively stimulated your nervous system with the high box squats and five sets of front squats, this last set is the finishing touch — the coup de grace, if you will — that will add slabs of muscle to your legs.

So that's the protocol. A different twist on a classic exercise that's sure to have you ready to buy new pants so your quads actually fit. Give it a shot the next time you hit the gym, but make sure to keep the puke bucket by your side.

A note for those of you without a box.

You can still reap the benefits of activating the nervous system by doing pin squats. Simply put the safety pins in the squat rack down to a point where you'd be just above parallel in a squat. Load the bar, squat down, get set, and start your squat from the bottom. After you stand up and come back down, let the bar sit on the pins for two seconds before you do your next rep. This eliminates the rebound effect. Stick to the same set and rep scheme for the high box squat outlined above and follow it with front squats and the max-capacity set. 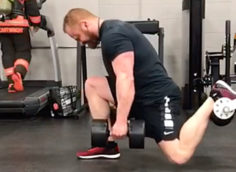 If achy knees are holding you back, throw this split squat into the mix on leg day.
Bodybuilding, Exercise Coaching, Legs, Tips
Andrew Coates May 10

Everything you need to know about choosing the right weight and loading schemes for your lifting goals.
Bodybuilding, Powerlifting & Strength, Training
Christian Thibaudeau June 20