Trolls in the Mirror

There's a guy at my gym who trains as hard as hell and always gives it all he's got. Despite this, the poor fellow looks awful! He looks like a mix between the hunchback of Notre Dame and a troll. After observing him for some time, I spotted his problem: he was a firm believer in the mirror training method, a.k.a. the "I only train what I can see in the mirror" principle.

It seems that in the quest for big pecs and big guns, the back has been thoroughly neglected by most trainees. Oh sure, a lot of people train the back, but how many train the back hard and with something besides pulldowns? From my experience, not many!

It's kinda' sad because having a well developed back is one of the fastest ways to gain size and thickness. It gives depth to your physique. A lot of guys look pretty good when you see them from the front, but look at them from the side and they look like an uglier version of Nick from the Backstreet Boys! Hey, you can't always be facing everybody; some people will actually get to see you from the side and even from the back. Shocking but true!

Having a big back is the only way to look good from all angles. It's also crucial to help prevent injuries and give you good posture. Come to think of it, I'm glad people such as my mirror-training friend exist. They allow us, the "enlightened ones," to look much better by comparison!

Furthermore, many people forget that the back is actually composed of many muscles. Having big lats is good to give the illusion of width; however, focusing solely on the lats is a sure way to develop a flat physique. On the other end, developing the rhomboids, middle traps, and erector spinea will give you a dense, thick physique. The routine I'm about to propose is a back workout designed specifically to enhance your thickness and width. In other words, it'll give you the complete package!

Perform the following workout once a week on its own day. (When specializing on a certain body part, I suggest doing only that body part during the workout.) I recommend the following schedule:

And the following workout, of course, is to be done on Day 1:

120 seconds of rest between sets

The power snatch is a fantastic back builder. Simply put, every muscle in your backside gets some work! The lower back is heavily involved (isometric and dynamic actions) and so are the rhomboids, lats, and middle portion of the traps (isometric action). The upper traps are also activated (dynamic action). It takes a little time to learn the power snatch, but my article, The Other Kind of Snatch, should help you out.

90 seconds of rest between sets

This is my absolute favorite upper back exercise. When properly executed it can give you fantastic gains in both back width and thickness. The secret is to squeeze your back hard on every rep and don't allow yourself to use momentum created by the legs to lift yourself up. Pause each rep for two seconds in the top portion and contract your back hard! Perform weighted if possible.

*See our FAQ section if you're unfamiliar with tempo prescriptions.

This is a great exercise to add thickness to your torso as it thoroughly works the rhomboids and the middle portion of your traps. The key here is to try to squeeze your shoulder blades together at the end of the movement to really create a powerful peak contraction which will help stimulate muscle growth.

This exercise is very good at developing the lats. The objective is to bring the arm up and back while keeping it relatively straight. Really concentrate on your lats while doing this drill; don't use a lot of weight as it's not needed to get the most out of this drill. It's more important to focus on maintaining maximum back tension during every inch of every rep.

I like this exercise because it really does a number on the rear deltoid as well as the middle and upper portions of the traps. It may look like a sissy isolation movement, but it's actually a fantastic way to gain some thickness. Having well developed rear deltoids is one of the fastest ways of looking like an animal!

If you read my "Canadian Cannons" article you're already familiar with extended sets. To quickly recap, start with a weight you can do for three to four reps in good form, go to failure, pick up the next smallest dumbbell, again do reps to failure, and keep using lighter dumbbells until you're using the lightest possible dumbbells in the gym.

That's all there is to it! This "stack" of exercises has everything you need to build a rock solid back. Every muscle receives a lot of stimulation and by utilizing both heavy weights, explosive movements and "pumping" exercises, you'll maximally stimulate all the muscle fibers. The result? Unprecedented width and thickness!

Remember, just because you can't see it in the mirror doesn't mean it's not there!

Learn to brace, no over-arch, with these form cues.
Deadlift, Exercise Coaching, Powerlifting & Strength, Tips
Tony Gentilcore January 31
Look around your gym. Most trainees lack the calf thickness to suspend a pair of double striped knee socks, let along balance out the size and symmetry of the lower leg. Now look in the mirror. Are you one of them?
Training
Don Alessi July 4 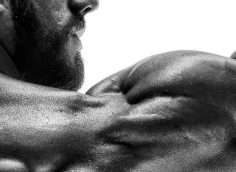 Grab a band and run through this quick routine. Your big ol' banged-up shoulders will thank you. Check it out.
It Hurts Fix It, Training
Gareth Sapstead October 30

These new rowing exercises will not only build a thick back, they'll force you to (finally) use optimal form.
Back, Bodybuilding, Training
Joel Seedman, PhD October 6