A couple months ago, I was paid a visit by a friend of mine known as "The Band Man."

Dick Hartzell is the master when it comes to band training. Most coaches, lifters, and trainers view the bands as a means of adding resistance to barbells, and much has been written in regards to the application of band in dynamic and max effort strength development.

What most people do not realize is that this only makes up a very small fraction of what bands can be used for. Dick has given thousands of seminars on the use of bands. He is actually on the road over 300 days per year spreading the word on band training.

This is also one of the main reasons we only support and sell bands made by Dick's company, Jump Stretch. I know of nobody who knows more about bands than Dick, so much so that I'm amazed each and every time we meet. His passion for performance is what has made and continues to make Jump Strength the number one source for bands. EliteFTS.com has been associated with Jump Strength for many years and supported their products fully. This is also why we sell all Jump Stretch Products.

This business relationship is the reason why I've met with Dick on so many occasions over the years. At first I thought he was out of his mind and that's probably why I liked him so much. I still think he's half nuts but the stuff he comes up with works better than anything else I've seen.

During his last visit, we got on the topic of my injuries and what I was doing to try and deal with them. Within minutes he began to empty his pockets and then take off his watch. I knew what was about to happen. I've seen this many times before. He was about to go into a band-training rampage.

This time was a little different, though, because it started with, "Dave, you have never really paid attention to this before. This time, watch, learn, and listen." So I did and 20 minutes later I knew exactly what I was going to do and how I would implement it into my program.

The results have been unreal! I've done tons of mobility work and other "prehab" types of training and really got little from them. Some things did help but nowhere as much as the "band traction" stuff Dick showed me that day.

If you've seen his videos or heard him speak, none of this will be new to you, but if not, I ask you to...

So what are these called?

I'll name these movements as I refer to them. These are very simple names I use that really have no special meaning. While these may seem like traction, they really aren't. I actually asked Dr. Ryan Smith to tell me exactly what these movements are.

This is what I was told:

Okay, Band Traction it is...

With this movement you'll loop two bands together (the average bands work best for this one) and place one end around the top of your power rack.

If you have an EliteFTS rack use the band pegs. If you don't have this option, just slip knot it around the top of your rack. We use the pegs to get a little more tension.

Note: Make sure your rack is bolted down.

Once you get the bands set up, you'll reach up under the band and then grab the two ends together. This will place the band around the top of your wrist so it'll pull through the arm without you having to grip the band.

Once you've "attached" the band, you'll need to step away from the rack until you feel like your arm is being ripped off. When you get in this position, move, move, and move more. Pull in every angle you can think of. Pull with your elbow in, out, whatever.

As Dick likes to say, there's no wrong way to move; just keep moving BUT make sure to get a full deep stretch at the end of each rep. Also, make sure to move your body. Do some movements facing the rack, and then some at a 1/2 turn, facing away from the rack, on your knees, anything! Just keep moving.

This is the same concept as the Horizontal Shoulder Traction except we now will be working in a different plain. To perform this movement, toss a band over the top of a power rack (the light band works better for this one) so the band is even on each side.

Reach up through the band so the band wraps around the back of your wrist. Grab the two ends of the band together so it doesn't slip out of your hands. You may also want to kneel on the floor to get a better pull. Once you're in position, begin moving.

Pull your hands down with your elbows out and elbows in. There's no wrong way to move; just keep moving and make sure to get a full stretch at the top.

Standing Lower Back Traction with Bands

To set this up you'll need to loop two strong bands together and attach one end around the top of your power rack (make sure the rack is bolted down). After this is set up, slide your torso into the band so the band is resting around your upper back.

Now you'll need to step away from the rack so the band is pulling your torso forward and up. When you get into postion, begin moving. Don't limit your movement to bending and arching. Step back into a reverse lunge, squat, side bend, side lunge, torso twists, basically everything. Just keep moving.

After a minute or so, move the band down your back and do the same movements again. There are hundreds of combination and band position you can do. Try as many as you can think up and you'll notice a difference on how your back feels as soon as you're done.

First off, don't be stupid with this one and break your neck. Use you head and be smart. If it hurts don't do it and keep the movements small and controlled.

There are several variations you can do with this one. The best bands to use for this are the light bands. Begin with one light band looped over the top of a power rack. Place the band behind the back of your head and move your head around. After some time, move the band down to the lower part of your head and neck and move some more. Work all four angles of your neck: front, right side, rear, and left side.

After you finish this, add a second band to the rack and place one band behind your head and the other under your chin (not on your neck!). Grab the bands so they don't come apart and step away so you feel like your head is about to be ripped off your torso.

When in position, move, move and move more. If you feel like you can't breathe, STOP. I can't believe I even have to write that but I've learned over the years that people will do stupid things.

This is a great one to watch big and largely immobile people try to perform. This is one I was unable to do for a very long time because just getting on the floor was a pain in the ass, let alone placing the band around my ankle. Now that I can do this, though, I've noticed a big difference in how my hips and groin feel.

With this movement, you can attach the band on the top of the rack, mid rack, or at the lower section of the rack. You'll need to use either a strong or average band to get a great pull through the hip.

Attach the end of the band that's not on the rack around your ankle. I find it best to loop it once around my ankle so it doesn't slip off. Once you're positioned, slide away from the rack so the band feels like it's pulling your leg off.

As with all the other band traction movements, MOVE.

Lying Lower Back Traction with Bands

To begin you'll need one light band. Sit on the floor with your feet flat on the ground pulled close to your body. Wrap the band around your back and place one end of the band around each knee.

Moan and groan if you like. I'm sure the people in the gym will love to see that. Let me warn you right now, though. If you try and have your wife or girl friend do this during the "act of love," be forewarned that the band can slip off her knees and thus sling your nutbag to the other side of the room.

Have you ever tried to find a misplaced nutbag?

Let me tell you, if you're lucky enough to find it, it won't be pretty. I can assure you it'll be flying at the speed of light. Have you ever shot a water balloon with one of those big rubber bands? Now you have a picture of what I'm talking about. Odds are it will bounce off the wall and find its way under the bed.

When was the last time you looked under your bed?

Now you'll have to wash it to get all the dust mites off. Oh, you think this is the end of the story. Not even close. When you wash it off, all the wrinkles will disappear, so now you're faced with the dilemma of how to get the wrinkles back in the bag.

You can, A, wad it up like a spit ball or B, toss it in the washer. I wouldn't suggest the washer for one reason, though: how many socks have been lost in there?

Okay, I think you see the point and consequences. Now let's get back on track.

Okay, this isn't really a band movement, but I threw it in because the bands made me think of it.

To do these, just attach ankle straps around your wrists and attach them to the hook at the top of the lat machine. This'll take your grip entirely out of the motion and allow you to concentrate on the lats. Plus, it has the added bonus of allowing you to focus more on pulling with the elbows.

This is all great stuff but how can you use it? Here's the plan I recommend:

This is to be performed before every training session. Each movement will last 1-3 minutes.

In the Words of "The Band Man"

This article wouldn't be complete without having some material from Dick Hartzell. Dick is always on the road, working or with his family so getting him to write is not an option.

He's also so passionate about bands that there was no way I was going to scribble notes and try to capture his passion. So, I did what I normally do. I picked up the phone and gave him a call:

Where can these bands be bought?

EliteFTS is the place to go for Jump Stretch Bands. You can phone them with your questions and orders at 888-854-8806 or log onto www.elitefts.com. 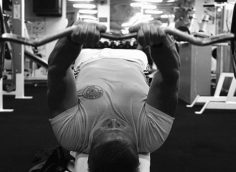 Here's how to cut out a lot of useless reps and get straight to the ones that produce the most muscle growth.
Bodybuilding, Training
Charles Staley October 18 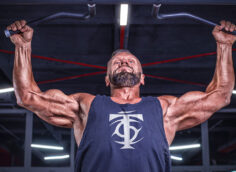 Whether you're a master of the pull-up or can't even do one with good form, this deceptively challenging variation is for you. Take a look.
Bodybuilding, Exercise Coaching, Powerlifting & Strength
Bradford Cooke February 3 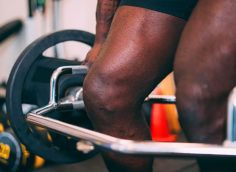 This challenging workout might just kill you. But what doesn't kill you... well, you know the rest.
Training
Mike Over March 4