I'm not sure if it does me a damn bit of good, but I think a lot. Whether it's pondering, meditating, deliberating, contemplating, or cogitating, I do it all.

After popping a couple Spike capsules, I was smack dab in the middle of my mantra when I came to a profound realization: I need to write an article that thoroughly incorporates many of my training methods.

Indeed, my Internet intermingling has led me to believe that many trainees are a tad overwhelmed with information. So, I'm here to expound on some of my most efficacious principles. While the following info might be familiar to some, virtually all readers will learn more effective methods to tackle the obstacles that impede their ultimate physique and performance goals.

As such, it's time for me to get off the meditation mat and onto the details!

My programs are based around free-weight compound exercises. Why? First, they provide training efficiency since numerous muscle groups are stimulated with a single exercise. Second, they allow for the largest training load (lots of iron on the bar), which is important for muscle growth. Third, they allow us to use movements that our bodies were effectively designed to perform.

As a gross estimate, at least 80% of my training session revolves around compound, multi-joint movements. But oftentimes, my entire session will consist of nothing but multi-joint variations. If you're ever unsure which exercise to choose for a given body part, pick the option that's multi-joint in nature. If you do, you'll always come out ahead.

In order to keep things simple, I rarely mention sets without reps (or vice versa). They must be concurrently matched; therefore, I usually prescribe set/rep volume parameters for each session.

I often get asked how many sets per body part should be performed in a given session. Well, that depends on the reps and load too. You can't separate these variables. If you do, you're focusing on the trees and not the forest. Usually, I'll aim for a set/rep volume of 24-50 per body part during each workout session. So for example, 8 x 3 would be a set/rep volume of 24.

Key Point: Aim for a set/rep volume of 24-50 for each body part during each session.

Key Point: Shoot for an intensity range of 70-90% of 1RM when training for hypertrophy.

I often get asked how many times per week a muscle group should be stimulated. If I had to give one specific answer, I'd say three. But, if you've only been training each muscle group once every 5-7 days, it's usually better to start off with two sessions per week, per body part.

Nevertheless, it rarely hurts to jump right into three sessions per week, per body part if you adhere to my parameters. During phases of adequate rest, restoration methods, nutrition, and supplementation, four sessions per body part per week works exceptionally well.

The key to achieving your ultimate physique at the fastest possible rate is directly correlated with the amount of sessions you can expose your muscles to. The only way a trainee can successfully train each body part for multiple sessions each week (with sufficient set/rep/load hypertrophy parameters) is to train the primary musculature in numerous planes with different exercises. With upper body training, this is relatively simple. With lower body training, it's a little trickier. For example, if you seek to build impressive pectorals, you'll achieve more hypertrophy by performing incline, flat, and decline benches during the week compared to three flat bench sessions.

Lower body training can be broken down into exercises that primary target the hips/lower back or that primarily stimulate the quadriceps. It's extremely difficult for any trainee (natural or assisted) to perform four barbell back squat sessions each week. But, if this same trainee performs back squats, deadlifts, front squats, and good mornings throughout the week, four lower body sessions becomes a viable option. So, yes, I may have you hitting legs 2-4 times per week, but you won't be doing the same exercises every workout.

This variance in progression methods helps keep the nervous system from being overloaded from continuous increases in loading. Such progressions are the basis of my Anti-Bodybuilding Hypertrophy and Outlaw Strength and Conditioning programs.

Key Point: Use different progression methods within your cycles.

This is the simplest of all my recommendations: Lift the load as fast as possible while maintaining control. Fast lifting tempos recruit the most motor units in any given rep. Since the greatest amount of motor unit recruitment will lead to the greatest level of hypertrophy, this is a no-brainer.

But this isn't a free ticket to use poor form. If you must compromise your form, decrease the speed of execution. Lower the load under control using a 1-2 second range. It isn't really necessary to count the negative portion, just control it.

I must mention that it's beneficial to train with different tempos, but my loading prescription already has this quality built-in. How? Well, let's say I told you to lift the following loads as fast as possible: 70%, 80%, and 90% of 1RM. What would happen? You'd get three different tempos. Voila! Neat trick, eh?

Key Point: Lift the load as fast as possible with proper form; lower the load under control.

All of the aforementioned elements comprise the term "parameters." When I say you should vary your parameters as much as possible, I'm referring to these variables. Indeed, the ability to build the physique you desire is limited by the amount of variables you can alter.

I've given you all the elements you need to understand (up to this point) to accelerate your efforts. I'm not saying that these comprise all training parameters, but I am saying that a sufficient understanding of these variables will give you a lifetime of training knowledge.

If I was a sneaky and deceitful bastard, I'd leave the article right where it stands. I've given you the variables, along with a little reasoning. That's surely enough, isn't it? But we at T-Nation go the extra mile to tickle your proverbial fancy. As such, I'm going to design the program for you! Think of this program as a hybrid of many of my most successful and efficacious training methods, all rolled into one.

If you've been aimlessly trudging through my articles with a perplexed look on your face, this program is the answer. Get ready to reach new levels of strength, size, and overall performance! 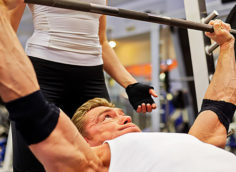 Destroy your sticking points with just a barbell. No gym membership or fancy equipment required. Here's what to do.
Training
Tom Sheppard December 7
There are any number of instances in which life becomes more hectic, and the first thing that gets axed from the schedule is usually gym time.
Training
Joel Marion September 7