Everyone wants to be strong. Any lifter or bodybuilder who says strength isn't important to them is lying. They may focus more on size or aesthetics but they still care, because strength is awesome. Not being intimidated by physical tasks that would terrify a mere mortal, knowing you could defend yourself or loved ones if necessary, being seen as a superhero by adoring children and panty-throwing fans – what's not to like?

So how do you do it?

Here are 7 key steps to follow to get stronger. I don't claim these to be revolutionary, just extremely effective, and a hell of a lot better than that infomercial gadget you bought at 3 AM on New Year's Eve after a few too many wobbly pops.

1. Build your program around exercises that require a lot of skill (technique) and can be loaded heavy.

I wrote more detail about proper exercise selection for strength in The "Best" Exercises article, but the truth is if you want to get strong, you need to focus primarily on free weight barbell and dumbbell lifts. Some assistance exercises and bodyweight exercises are fine and certainly useful, just don't blow your wad on lat pulldowns or lateral raises.

The key to any successful strength program are the core compound exercises, the ones you'd do if I said you could only perform two exercises in a training session. That's where you should focus your efforts. Assistance exercises are just that – they help you improve the big stuff and keep you healthy. Don't major in the minors.

2. Understand what good form is – and actually lift using it.

You have to know how to squat, bench, and deadlift correctly. And please, don't be a YouTube critic that just knows what good form is – go to the gym and put that knowledge to use.

Notice I'm saying to use "good" form; it doesn't have to be perfect. Form is rarely perfect when first learning a complex exercise, and even seasoned lifters exhibit some degree of form breakdown once a challenging weight is on the bar.

Don't make perfect the enemy of the good. Use good (biomechanically safe and effective) form and you'll be fine.

Note: the book Starting Strength by Mark Rippetoe will be a big help with this. The new third edition should be among your next purchases. You could also hire a quality coach for a few sessions. Think of it as an investment in your future success. This isn't an area where it pays to be a cheap bastard.

3. Follow progressive overload on some sort of relatively standard interval.

Progressive overload is placing a load on the body that it isn't accustomed to, forcing it to adapt so it's better prepared to face that stimulus in the future. It's a key fitness principle and must be followed to some degree in any good training program.

4. Take long breaks in between work sets on your main exercises.

When I first started college, I was "kind of" strong. Nothing crazy, but stronger than most people. I was known for being that guy who rested five minutes in between sets, and the guys I lifted with would sometimes tease me for taking what they thought was too long of a break.

"You're lazy, you're losing the fitness and cardiovascular benefit of the workout, blah blah blah."

Fast-forward two or three years – my warm-up sets were now heavier than their maxes – and suddenly, nobody was teasing me about resting too long anymore.

When you're training for strength, it's the completion of that specific set – benching 315x5 or whatever you have on the schedule for that day – that's important. To complete that tough set, you need to be fresh. You want to approach your main sets warmed up but not tired. You should be fresh and ready to go. You don't need to rest five minutes after you bench the bar because that's super easy, but for the big stuff you need to rest.

That rest time is important and invaluable as it takes some time for your motor to recharge: about 3-5 minutes for ATP, 5-8 minutes for creatine phosphate, and about 5-15 minutes for the nervous system.

I'd say that the number one difference between a good strength program and a good size program is the rest time between work sets – for strength take long rests, for size just use moderate rest periods.

Strength takes time. Very few people walk around with the ability to bench 315 or squat 455 without any training. But if you're willing to put in your time – not some 60-day challenge nonsense but three, five, even ten years of solid and consistent training – you'll be strong at the end.

Maybe not as strong as you want to be, but a hell of a lot stronger than you are now, and a lot stronger than most normal people slouching across the Wal-Mart parking lot. Train 50 weeks out of the year for several years and you'll be well on your way to being a bad ass.

This is what we love about training, right? It's the hard work – and our ability to do it – that separates "us" from "them."

You can watch a video and study some articles, download a great program, buy a fancy tight shirt and get some cool new gloves – but if you don't get your ass under the bar and break a sweat (along with maybe a few blood vessels), you aren't going to make much progress.

George Allen says a workout is 25% perspiration and 75% determination. You wouldn't get much out of it if it weren't hard, so remember that when you've got a spine-crushing weight on your back.

One of the joys of following Step 3 (progressive overload) is that at some point the workouts automatically get hard. Adding 5 pounds to a lift here or a few extra reps there will eventually have you testing your mettle. And that's a good thing.

7. Work out with people also following these guidelines.

Having at least one (and preferably more) consistent, hard working, positive training partner is awesome. I can honestly say that having great workout partners has been one of the best experiences in my life, and I've been lucky enough to have several of them over the years. Hell, I even founded a powerlifting team in part because I wanted other people around to help me work out.

I've written before that I think training with others causes a better hormonal release – but even if that's just placebo or simple bullshit, I still feel that being part of something a little bigger than you is a great thing.

Seeing somebody else sweat and suffer and accomplish things can stoke your fire and help keep you motivated when progress stalls. On the flip side, if a partner is more trouble than they're worth, cut them loose. Trust your gut on this one; you'll know what the right decision is.

That's it, and that's all you need. Seven simple steps to get strong. These tips may not be new or "revolutionary," but they work. Everybody wants that new thing, that exciting new gimmick to get strong.

Trust me, it doesn't exist.

Chefs rarely look for some new magical ingredient that nobody's ever heard of to make their food awesome. Instead, they think about the perfect way of combining ingredients they already know about.

Think of this as a recipe for strength. If you want to get strong, take these 7 ingredients, apply liberally and regularly, and see what happens. I think you'll be happy with the results. And you'll definitely be stronger. 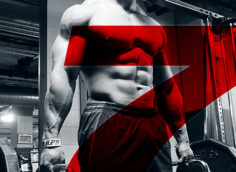 We asked our experts to give us their best week-long training challenge. Pick one and tackle it. In seven days you'll be bigger, stronger, and wiser.
Bodybuilding, Challenge Training, Powerlifting & Strength, Training
T Nation June 26

Some say straps lead to a weak grip so they never use them. Others use them for damn near everything. Here's the smart lifter's approach.
Bodybuilding, Powerlifting & Strength, Tips, Training
Dr John Rusin September 11

Certain muscles respond much better to specific rep schemes. Here's how many reps to do for back, quads, chest, shoulders, and more.
Bodybuilding, Powerlifting & Strength, Training
Lee Boyce April 19