People get emotionally attached to certain physical practices. Their commitment and beliefs about them will turn something that was once benign into a ritual. The result? Repeatedly doing ineffective stuff, or worse, doing more of the exact thing that's making them injured.

If you find yourself aimlessly pounding through ego sessions with no major benefits, it's time to step back and take a closer look at your practice. Here are the six things that you (or someone you know) are emotionally attached to.

The burpee originated in the 1940s for use in physical fitness tests in the military during World War II. Today it's become notorious in CrossFit and metabolic conditioning workouts.

There's no debating that the burpee has the ability to raise the heart rate in a short period of time, but to think that it's mandatory for general fitness is wrong, and even debilitating, if you're not prepared for it. With so many moving parts, changes of positions, use of acceleration commonly programmed to the brink of physical failure, this move can have a huge risk-to-reward ratio.

So why do people do this movement even though they can't execute it properly? Because that's what they've been taught to do. And since people associate pain with progress, they believe doing more and more of this taxing exercise is helping them make more and more progress.

But if the goal is to bring up aerobic conditioning, there are better ways to do it while minimizing the risk of shoulder, wrist, and lower back injuries. The burpee makes no sense if you're unable to complete sound bodyweight squats and push-ups as standalone movements. Compensation under speed and stressful environments will result in pain.

Walk into any gym and you'll see someone doing an ugly contorted version of the barbell bench press. It must be a rule of science by now because every gym has at least a few of these special individuals.

The problem? It's hard on the shoulders and has little effect on the aesthetic musculature of the pecs. Yet people gravitate towards it for some deep-rooted reason that has more to do with gym rituals and image than actual results. But maybe they don't know their results kind of suck, since the bench press does directly train and pump up the mirror muscles.

Here's the deal: If you can't do it without pain, or without drastically compensating your movement pattern, range of motion, or tempo, you should probably skip the bench until you get that shit figured out.

If building a bigger chest is your goal, the barbell bench press isn't even the best pressing variation. Try some of the options here: Bench Press Without a Bench. Oh, and no one gives a shit how much you bench... or if you bench at all.

If you want to have a really shitty day full of emotional confrontation, tell a runner to take some time off of road work. Runners associate their ability to crank out mileage with their worth as a human beings.

Their dependence on this physical practice above all other things makes endurance athletes a hell of a challenge to coach. And while I pride myself on finding ways for people to train around their pain and physical challenges, there are obvious instances where continuing to run (or lift for that matter) does more harm than good.

So why is this group of athletes a challenge? It's possible that this discipline attracts a certain personality type. Coach Christian Thibaudeau calls certain athletes "harm avoiders" meaning that their neurological makeup predisposes them to routine and predictable practices.

And many use endurance training to control calorie output. It scares them to stop running when they depend on that specific activity to use thousands of calories. That means they'd rather continue running injured than regenerate, recover, and get healthy again.

The last factor that makes people emotionally attached to running is the potential loss of a "white noise period" or the "runner's high" that's associated with long duration exercise. Though every exercise has its own benefits, runners often use their workouts to improve their outlook on life. This is why they'll run through the most painful and challenging conditions, sometimes even with high levels of performance.

The one thing that lifters have over runners is that we have the ability to alter our training loads, methods, means, and frequencies more easily. Running is a single modality. So let's learn from runners and their commitment, but also be damn thankful that as lifers we have more wiggle room that'll allow us to be healthier, stronger and more resilient for the long haul. That is, if we're smart enough to use the tools in front of us.

Hamstrings get all the blame. It's the first thing people think of when their lower back hurts. And they almost never consider that their crappy movement patterns or weak core might be the culprit. So athletes and lifters religiously stretch their hamstrings every single day because they think this muscle group is tight.

If you're stretching your hamstrings every day for months (or years) on end without improved flexibility, mobility, movement patterning, or pain relief, it's not working. And it's time to get out of this rehab purgatory.

If you aren't seeing results from stretching, then it's not only a waste of time, but it may be working against you. The thing is, muscles don't get longer; they maintain a certain tone or tightness based on neurological impulse. So yes, strategic stretching DOES work in terms of reducing tone and tightness (in the short and long term), but if it hasn't worked for you by now, it's probably not going to.

Stretching does have its place, but if it isn't alleviating your pain, it's time to look elsewhere... like pillar stability and strength. Start doing anterior core activation drills such as active straight leg raises and dead bugs. And don't just aimlessly guess if these drills are working. Use one of the longest standing orthopedic assessments of spinal, pelvic, and hip mechanics: the toe touch test. Test before and after your core stability work, and assess the results.

Doing your first pull-up is rewarding. Going from zero to one rep in anything, especially a relative strength exercise, can motivate you to do more. But too much of a good thing can result in a net negative balance.

Female lifters and athletes seem to get the most obsessed with improving pull-ups. And while there's no problem using them as a measure of relative strength, there's a huge problem when it becomes the cornerstone of your training and you don't yet have the strength to just crank them out.

If you can only do 1-2 quality pull-ups without assistance like bands or kips, then what type of training effect are you even getting? A single or double is considered a power scheme no matter the movement type. This scheme is more closely associated with neurological and skill-based dependency rather than a development of more resilient strength or the ability to transfer new muscle mass into function.

Once someone gets a pull-up for the first time, the very thought of using accommodating resistance like a band or pull-up machine is considered beneath them. This results in tons of "skill work" instead of any structural work, which elicits strength and hypertrophy-based benefits. And as anyone who has focused on power sports knows, working at high frequencies, volumes and intensities on any given movement can be pretty damn hard on the body.

The truth is, vertical pulling is actually not joint-friendly. Many people struggle with strict pull-ups not because of their strength deficits, but rather coordination and motor control deficits that are needed for a stable and correct movement.

If you don't have the overhead mobility to get into a full range of motion vertical pull, or you lack the motor control to stabilize the shoulders through a range of motion, trying to do more without assistance is just throwing gasoline on the fire.

Those two deficits are the reason a pull-up heavy program can result in shoulder and lower back pain and injury. So be smart about your pull-ups. Read this: Stop Sucking at Pull-Ups. Then test them, get stronger over time, and realize that they're a minor movement player in the grand scheme of physical training.

Want to chisel an impressive six-pack in record time? Just pull a Hershel Walker and knock out a few thousand sit-ups a day in front of your TV during commercial breaks and you'll be rocking deep cuts through your mid-section in no time!

This thought seems outrageously stupid for seasoned veterans of the iron game, but you know what? It's likely still influencing your core training. The mythical idea of spot reduction is powerful. And while targeted regional fat-loss is possible at the highest levels of sport, the vast majority of people falling through the core training cracks are not the physically gifted one-percenters that can make it happen.

For average people doing average training, the science and anecdotal study of targeted abdominal fat-loss is pretty straight forward: it doesn't work. So why do people still do it? Probably because it feels effective. A strong muscular contraction is powerful for enhancing results, but in this case, it doesn't do much for the misinformed masses.

If you're carrying a substantial amount of body fat, especially fat centralized around the abdominal wall (which happens to be the most unhealthy of all) you should probably focus on a more generalized fitness program. Build muscle, burn fat, and monitor your nutrition.

And for strength athletes and lifters who want more prominent abs, direct core training can be powerful. (Try these ab training exercises.) The key is building muscle and getting lean enough to see an aesthetic benefit, which most people try to skip altogether.

Do 4 sets of 15 reps. On the first 10 reps of a set, do normal curls. On the last 5 reps of each set, switch to hammer curls.
Arms, Bodybuilding, Exercise Coaching, Tips
David Otey July 11

My new pastime (and how women should train)
For Women, Training
Christian Thibaudeau March 28 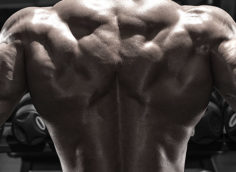