That Guy Was Wrong!

For years, there's been this one strength coach who always says that there's really no such thing as a bad exercise, only bad applications of good exercises. That coach was... me. Turns out I wasn't completely correct.

While most exercises can serve their purpose when used for the right reason, there are still a few that don't have any rhyme or reason. At best, these exercises will waste your time and energy. At worst, they'll interfere with your progress because they constitute "garbage volume" that will steal away your recovery resources.

Here are the five exercises I consider completely worthless:

It literally does nothing good. I can't even believe this one still exists! I really think it's only done by people who want to look tough or attract attention in the gym, because there's no logical reason to do it.

Second, it just teaches you to be slow. If a movement is overloaded and speed decreases by 10% or more, it will have a negative impact on the performance of the unloaded movement. I'm talking about explosive movements here. So, punching with dumbbells makes you a slower puncher. (And the same is true for weighted bats in baseball, often used as a "warm-up.")

I asked them, "Did you jump higher before or after the set with the vest?" They all said they jumped higher after. Well, they didn't. They all jumped lower after the set with the vest. They thought they jumped higher because of the difference in perceived speed. They felt so much faster when compared to the vest set that they thought they got faster.

This is basically just combining a lunge with an upper body movement. For example, lunging and curling when you're in the low position of the lunge, or lunging and overhead pressing.

I get it. You're trying to work everything at the same time. The problem is, you're making the lunges pretty much worthless. If you can curl a pair of dumbbells they're very likely too light to provide an overload for the lunge. Same thing with the overhead press.

Do these exercises separately. You might think you're killing two birds with one stone, but in reality you're throwing one stone away.

Sure, sure, it might burn a few extra calories. But you're certainly not building or strengthening anything, unless it's your first day in the gym.

This is idiotic. Why? You simply can't lift as much weight when you're on an unstable surface. You also lose a lot of the mind-muscle connection when your attention and CNS resources have to be divided into two different motor tasks.

"Yeah, but you're improving stability and core strength!" Maybe. But there are better ways of doing that. And those methods don't involve making another exercise (curls) less effective.

Do I really need to explain this one? Probably, because I still see it every week.

Listen folks, it's simple mechanics: holding one dumbbell in each hand negates the need for the muscles to do the job. Instead of having to use your obliques to lift the weight from one side up, you simply rely on the weight in the other hand to counter-lever your way up.

It's like a teeter totter. If you have a tiny kid on one side and a fat kid on the other, the tiny kid will have a hard time making the fat kid go up. He'll have to use muscular effort (slamming himself down the seat) to do the job. But if both kids are the same weight it requires almost no effort to get started, and once started pretty much no effort is needed.

Side bends, even when properly done (one side at a time) are an overrated exercise anyway and could be potentially risky for the spine. Try the side-plank crunch instead.

Over the years I've been a defender of CrossFit and many of its exercises, like kipping pull-ups, which have their place for advanced competitive CrossFitters.

But one exercise I just don't understand is the jumping pull-up. I'm not taking about jumping from the floor to grab the bar then pulling yourself up, which can have some value. Here's what I'm referring to.

In some CrossFit classes you have the option to "scale down" if you can't do an exercise as prescribed. Let's say you have pull-ups in a WOD. If you can't do pull-ups, instructors normally have you do banded pull-ups. But some people are too weak (or heavy) for those. What do they do then? They put a box below the pull-up bar. The person stands on the box with his or her hands grabbing the pull-up bar. They're instructed to "jump and pull" until their chin is above the bar.

This doesn't do anything, though I suppose it requires more calories than sitting the exercise out. But the small hops aren't intense enough to build power, and the upper body doesn't do any work. It has nothing to do with the original exercise, the pull-up. 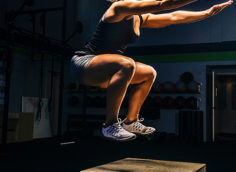 If you want to know the true size of your arms, measure them correctly. Here's your guide.
Arms, Bodybuilding, Training
Charles Poliquin February 4 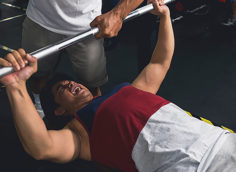