Let's say we take an experienced lifter and have him perform his planned bench press workout. And let's say we can rate the effectiveness of that workout on a scale of 1 to 10. Got it? In that bench workout, he scored a 6.

On another day, our lifter performs the same workout, only this time he spends just 5 minutes "priming" his body first. After his training session, he gets his effectiveness score and this time it's a 10. In other words, that same workout worked better this time. He became stronger or built more muscle. So, what the heck did he do in that 5 minutes? He simply performed a quick pre-workout primer – a booster. And you can too. Here's how.

After your warm-up and before you start lifting, you're going to do a few sets of one exercise to stimulate high-threshold motor units. This will unlock more explosive strength. You'll briefly focus on explosive rep quality to shatter strength plateaus, get more athletic, and activate more muscle fibers for growth.

By adding explosive exercises that are biomechanically similar to your big lift for the day, you'll ignite your central nervous system (CNS). In geek speak, this enhanced neuromuscular readiness improves motor unit recruitment and "patterning" for your big lifts. As a result, greater motor unit recruitment pulls more muscle fibers into your training, helping build strength and muscle.

Pick the Right Primer for the Training

Once you've completed your warm-up, use an explosive movement that will complement your major exercise for the day. Here's a guide:

If your main exercise is the bench press, do the clap push-up or incline plyo push-up.

If you're going to be squatting or cleaning, do a vertical jump, box jump, or squat jump.

For a deadlift or clean workout, do a broad jump or kettlebell swing.

Perform 3-4 sets of 3-5 reps. Focus on max intensity and execution on each rep. Rest 1-2 minutes between sets. And don't do these like a granny. The faster you can contract the muscles, the more muscle fibers are recruited and the stronger you'll become. After your explosive movement, continue your training routine as planned.

How It Works: The Geeky Stuff

If you're like most lifters, you're well versed in the big strength movements. You have a strong squat, an impressive deadlift, and can hoist a few plates on your bench press. Since you already have a solid foundation, you have the base to build more explosive speed, muscle, and power. Your next step? Improving both intramuscular coordination and intermuscular coordination to accelerate gym performance.

What is Intramuscular Coordination?

Intramuscular coordination is the synchronized firing of motor units. It makes all the difference in the world for someone wanting to move his or her body with grace and agility. It's the difference between controlling your body like an athlete and flailing awkwardly like a child having a tantrum. When muscle fibers contract in a coordinated manner they become efficient and powerful.

There are three aspects of improving intramuscular coordination:

By improving intramuscular coordination, you'll generate movement faster, use more muscle fibers, and help motor units fire at the same time. To do that, you have two options:

In the case of lifting heavier loads, most lifters have this locked down. Between ramping sets through the warm-up and pure strength work, you're lifting plenty of moderate-heavy loads – 55-95% of your 1RM. For even more benefit, work further along the force velocity curve with lighter, more explosive movements.

What is Intermuscular Coordination?

Besides the occasional pain of a midnight calf cramp, it's rare that only one muscle contracts at a time. Generally, a whole group of muscles is activated to produce a movement. That's intermuscular coordination: the improved coordination of muscles in a specific movement.

In the context of your training, this means improving a squat, deadlift, pulling, or pushing movement. To maximize intermuscular coordination, you must refine the interaction between muscles that control a movement to perform better together. To improve both intra and intermuscular coordination, you'll need to move lighter weights faster and match the movement with your focus for the day. 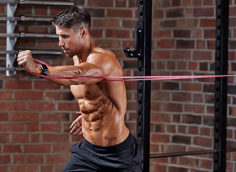 Got some bands? That's all you need to build bigger triceps and better lockout strength. Try these moves.
Training
Gareth Sapstead September 13