One of the mainstays of Eastern European programming is getting a lot of submaximal training volume, especially in the 70-80% range. When you watch a lot of these lifters in a competition, their technique is absolutely flawless. Every rep from their first warm-up to a maximal attempt looks the same.

Unfortunately, most of us can't go in and immediately start crushing ourselves with volume. In this case, incorporate back-off sets at 90% of your repetition work for that day.

The goal is to build more volume into your programming, but doing back-off sets at 90% ensures a few things:

Many moons ago, I gave paused work it's first real run. As someone who's more of a reactive lifter (very springy and elastic), this was a humbling experience. I was consistently using far less than 50% of my 1RM and it was still kicking my ass.

However, the results were more than worth the effort. Not only did I get significantly stronger, but the biggest change was in my bar path. No longer was I dipping forward in my squats or getting loose in my bench press. All of a sudden, both these lifts had very tight and efficient bar paths and my numbers went through the roof.

Beyond improving bar path, when you slow down or pause a lift, you're taking the tendons largely out of the equation and putting the stress more squarely on the muscles.

And when you're forced to camp out in the bottom, or really slow a lift down, you'll also notice a significant improvement in your kinesthetic awareness of the lift as well.

To get the most out of paused work, here are two options:

Last but not least, if you're doing paused work you want to make sure every rep is tight.

Lifters who are very elastic and springy benefit greatly from paused work, for all the reasons listed above. On the other hand, you have lifters that aren't springy or elastic at all.

In fact, the bar speed of every rep from their warm-ups with the bar to a limit lift looks largely the same – kinda' slow and methodical.

Can you get strong grinding out rep after rep? Sure, but there's a lot of benefit in focusing on movements that expose the nervous system to very explosive movements.

In this case, think about jumping, sprinting, and med ball throwing exercises. The key here is to ease yourself into things. If your idea of explosive work is speed squats or deadlifts, then this will definitely be a shock to the system.

With regards to jumps, try box jumps. They reduce eccentric stress on landing, and they focus on the anterior chain, which translates well to squatting. On the flip side, broad jumps tax the posterior chain and should improve your deadlift.

Going a step further, some short sprinting will expose the nervous system to very explosive movements and a high rate of force development. It won't be specific to lifting, but that's not necessarily the goal.

Charlie Francis has noted that even though many track athletes don't make the weight room a priority, they often move very heavy weights when they do.

While there are other factors at play (most notably good genetics), there's probably some truth to what Francis believed. By exposing the nervous system to very explosive acts, it can carry over to other movements such as squatting and deadlifting.

If box jumps or sprints are somehow problematical, med ball drills are definitely better than nothing. Try forward and backward med ball throws for lower body explosiveness, as well as plyo med ball throws for the upper body (lying on the back and having a partner drop it on you while you catch and then reverse the motion).

There are essentially two ways you go about choosing your assistance exercises:

Let's use the back squat as an example. If someone misses the squat in the bottom, they could use a specific exercise such as a paused back squat, or 1 and one-fourth squats to help bring up that weak area.

On the other hand, they can also choose a front squat as an assistance exercises. It's not as specific as a back squat, but it should still have some general carryover as it builds the core/trunk, hips, and thighs.

As a general rule, we often start training cycles off with more general assistance work to bring up lagging or weak areas, and as an athlete gets closer to a competition, we'll get more and more specific with regards to exercise selection.

5. Use Oxidative Lifting in the Off-Season

I don't know about you, but if I'm trying to move a limit lift, I don't care what types of muscle fibers are helping me. Slow-twitch, fast-twitch, whatever, if they're willing to help me get that damn weight up, I want their help! That's why we give a little love to all type of muscle fibers, slow-twitch included.

For example, we use oxidative (or tempo) lifting to hypertrophy slow-twitch muscle fibers. Let's use squatting as an example:

Un-rack the weight and perform your squat with a continuous motion or tempo, like 202 or 303. The goal is to move slowly on both the eccentric and concentric portions of the lift.

Furthermore, don't lock the joints out for the entirety of the set! As soon as you get near the top, immediately move right back into the next rep.

Q & A with one of the world's premier strength coaches.
Powerlifting & Strength, Question of Strength, Training
Charles Poliquin December 3 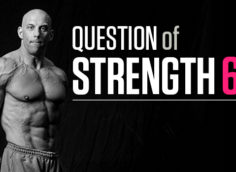 What are the best strength and muscle-building methods? And can resistance bands ever replace weights? Coach Thibaudeau answers.
Question of Power, Training
Christian Thibaudeau December 12

Whether you're an athlete or bodybuilder, you should be training your neck. Here's the smart way to do it.
Bodybuilding, Powerlifting & Strength, Training
Joe Giandonato & Todd Bumgardner February 21