I was training with Olympic lifter Dmitry Klokov at this massive gym that featured virtually every machine known to man. He looked around and said in his thick Russian accent, “All of these stuffs… no need. Just barbell. Everything that can be done, can be done with barbell. Just barbell.”

He had a point. You could indeed build all the muscle your genetics will allow with a squat rack, a bench, a barbell, and an assload of plates.

But there ARE machines that can supplement barbell training to make it more productive due to their ability to hit certain muscles in a more isolated fashion. Of course, I have to add that no muscle can truly be isolated.

Still, machines allow you to focus on the secondary and tertiary movers involved in compound movements that are often lagging, at least compared to the primary movers. Once you bring those weak areas up to snuff, you’ll find that your “just barbell” movements improve as well.

Which machines can benefit the “just barbell” athlete? Let’s take a gander.

Both the seated and lying leg curl are solid choices for working the hamstrings through lower leg flexion, but I’ve grown to prefer the seated version for several reasons.

The main problem with the lying leg curl is that once the loading gets heavy, most people have a natural tendency to allow the hips to rise off the bench. This reduces tension on the hamstrings by not allowing them to fully shorten against the load.

With the seated version, you’re training the hamstrings in hip flexion while fully shortening them as well, putting all that glorious tension right where it’s supposed to be.

The seated version also offers you a more stable environment due to the kneepad that locks you into position like you’re going on a roller coaster ride. This means better bracing than the lying version.

Do these while driving your knees upwards into the pad to create extra tension. Hamstring cramp city. To make this bad boy even more productive, lean forwards just a bit to mimic a hinge at the hip.

I love using the 10-6-10 method where you start by doing an isometric hold for 10 seconds, follow it up with 6 slow eccentric reps (3-5 seconds), and finish with 10 partial reps. (See video above.)

It’s become my go-to on lying leg curls too because the 10-second static hold keeps the ego at bay and ensures I’m using the proper load. If you can’t hold the 10-second static position then you’re going too heavy. I see a lot of lifters using way too much weight on these, which translates into slop reps that don’t stress the targeted muscle effectively.

The good girl/bad girl machine. These two machines get a bad rap because for a long time women were told to get on them to “shape and tone” their thighs via the bullshit known as spot reduction. In fact, I often have to wait for some little old lady to be done with these before I can hop on. And yeah, I got a few stares along the way. Even from granny.

It’s crazy how many people hate these machines because they’re not regarded as “hardcore.” They saved me from a recurring injury when I was competing in powerlifting. I suffered from a bout of adductor strains during those years that drove me nuts, but once I got really freaking strong on the adductor machine my squat climbed from 635 to 660 pounds.

I’m not saying there was “carryover” to my squat from doing the good-girl machine. But once I stopped having adductor strains, I was able to smash out some very productive squat cycles that allowed those gains to happen. I credit the adductor machine for that.

But I didn’t approach it like Suzanne Summers ThighMaster time. I really pushed the progressive overload and worked to get brutally strong on them, eventually working up to using the whole stack for lengthy sets.

With the bad-girl machine, aka the abductor machine, I used it prior to squatting as a way to get my hips and glutes warmed up. I stayed lighter for this movement and worked in the 15-20 rep range. When I initiated a squat workout this way, my squats felt way better and were more “in the groove” right out of the gate.

If you find yourself struggling to hit depth early in your squat session because the loading isn’t heavy enough to force you down into position, or that your hips and knees are ornery in the warm-up process, throw these in before squats to potentially alleviate that problem. Three to four sets of 15-20 reps will do the job.

There’s one very common mistake I see in a lot of strength athletes’ programs – extra low-back work. They have absolutely zero awareness of just how much work their erectors are already doing.

If you’re squatting, deadlifting, and doing standing overhead presses, then your low back is getting a metric butt-ton of work; not even indirect work, but very direct work.

I can’t tell you how many strength athletes had their squat and deadlift climb up once I removed all of the extra spinal-loading movements. The fact is, fatigue will mask fitness.

The best thing you can do is choose exercises where you give the low back a break from loading while working the musculature around it so that it has a stronger support structure. That’s where the chest-supported row comes in. There are countless variations of this machine, but virtually any of them can be a strength athlete’s best friend.

I like the seated machines rather than the ones where you’re lying at a 45-degree angle because the natural tendency on those is to arch very hard once the loading gets heavy, which defeats the whole purpose of choosing the chest-supported version.

If you don’t have access to the seated machine, rig up your own with an incline bench and a low cable. The best bar to use in this situation is one with a curve in it so you aren’t banging it into the bench and can get your elbows behind you far enough to get a strong contraction in the upper back.

Don’t rip the weight on the initiation phase. Pull with a “roll on” rep fashion where you initiate with the upper back in a very deliberate manner and then pull aggressively into the strong peak contraction. Hold that puppy for a second before lowering. 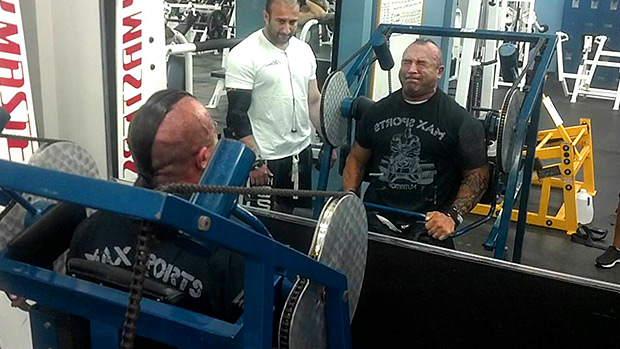 It truly sucks that the majority of gyms don’t carry this piece of equipment. If yours does, consider yourself very lucky because it’s the single best overall lat developer there is, bar none. In fact, it might be the single best machine ever developed in terms of muscle building.

The Nautilus pullover eliminates the elbow flexors from the movement, which are the weak links. Instead, this machine works with the shoulder extensors, which allows you to really smash the living hell out of the lats.

There’s also resistance at virtually every point within the range of motion. Barbells and dumbbells fall short because they have a descending resistance curve. So it’s hard in the beginning, but not a lot going on by the end. (That’s what she said.)

The end point of the range of motion is important here because that’s where the lats are shortening. Contrast that with the free weight version where there’s literally no tension on the lats in that position.

I’ve seen virtually every variation of pullovers used to recreate the Nautilus pullover, but the only one that gets close is the incline rope pullover. The key in doing these is really execution, but that’s the case with most movements.

You don’t want to turn incline rope pullovers into a triceps pushdown, so the elbows need to stay slightly bent during the concentric/lifting portion of the movement. And the focus should be in bringing the elbows down and into the waist to really shorten the lats against the load.

At the bottom, you want to try and squeeze the elbows together to maximize the peak contraction. Then really fight the eccentric/negative to increase force production. They’re not Nautilus pullovers, but they might have to do.

This is another machine that gets poo-poo’d by the strength training community. The thinking is that everyone should be able to do regular dips with their bodyweight, bare minimum, for a set of 20.

I don’t disagree with that. If your shoulders are in good health and you’ve got adequate anterior serratus strength, then dips are a staple in a “just barbell” program. Dips do an amazing job of developing the chest and triceps and, for the most part, have a low degree of injury potential. (I write that even though I suffered a tremendous pec tear doing dips, but I still consider them relatively safe.)

The benefit of the Gravitron or any assisted dip machine is that the shoulder joint isn’t dealing with as much torque on it by having to offset the load of your bodyweight. With the Gravitron, you can still get the benefits of dips, but in a more joint-friendly fashion that also allows you to focus on making the muscles do the work, rather than focusing on moving your body through space.

Thanks to the offset loading, you get a chance to “feel around” with different body positions, and that can help you figure out a torso and elbow angle that feels natural for you.

If you haven’t done a set of these, then you’re missing out on some sweet pecs/triceps pump action. These hurt in a really glorious way.

If you’re truly maniacal, hop on over to the Smith machine and do a set of Smith machine push-ups with the bar set at the bottom position. If that doesn’t smoke all of your pressing muscles to the max, then you’re truly dead inside.

The Closing Argument for Machines

There’s really no such thing as a crappy machine in the gym. It’s really all about your goals, what you’re using a machine for, and how you’re using it. When you factor in all of that, virtually every machine has some legitimate purpose to it.

And for the strength training athlete whose goal is to put more weight on the bar, machines are good options to build some extra muscle, stay injury free, and work around some nagging areas that are keeping you from progressing further.