Conditioning: The Cardio of the Strong?

The average strength athlete loathes the very thought of traditional cardiovascular training. So it’s no surprise that old school methods of conditioning have become a staple in many strength-training programs. While the general idea of choosing conditioning over cardio remains solid, the basic execution of these movements is lacking.

Conditioning has likewise begun to make its way into the general training population, but some of the most mainstream forms of conditioning have become pitiful excuses for physical performance.

This has resulted in non-contractile tissues like tendons, ligaments, and the rarely-forgiving joints of the body being subjected to some very stressful and unnecessary bouts of training.

If your primary objective of implementing conditioning to your strength program is to elevate your heart rate and anabolic hormone production, there are better methods than the following orthopedic pitfalls, listed from least damaging to most damaging.

Hitting all fours and putting your grill in the grass has become the latest conditioning craze. 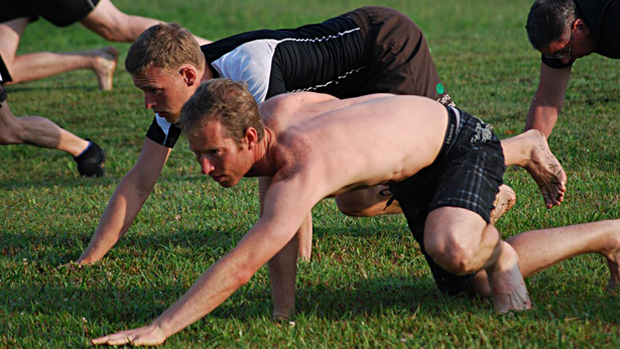 Crawling is one of the most primitive and foundational movement patterns people master in order to eventually walk on two legs. As we move through the typical, and by now brutally monotonous and overstated developmental process, crawling links up our body segments to enhance both mobility and stability to create our first form of locomotion.

This all sounds great in theory. Get back to the basics with an ass-kicking workout, right? Not so fast. It only sounds amazing until people actually attempt to drop down on their hands and knees and start plodding away!

With our everyday postural demands at an all-time high and our general level of body composition and movement abilities at an all-time low, the once natural crawling pattern may as well be a 150-kilogram snatch. You’re not going to be able to do it at first, and even if you are, it’ll crush your body in the process.

While the bear crawl involves ample hip and pelvic mobility in order to maintain a neutral spine, not many people meet these prerequisites to make the crawl a safe and effective method of conditioning. Decreased mobility translates to destructive stresses through the adjacent joints, in this case the five segments of your lumbar spine.

This is why your back hurts after bear crawling your butt around the gym. It’s no mystery, as your trainer might lead you to believe, just weak movement execution!

The bear crawl is no better for your shoulders than it is for the lower back. When programmed for maximal speed or time, like most “coaches” teach, heavy compressive loads and positional malalignment becomes an orthopedic nightmare.

Do This Instead – Controlled Developmental Crawl

The focus of crawls should be to own your mechanics while relearning an elementary movement pattern.

If you’re worried about not getting your heart rate up while crawling the proper way, it’s obvious you’ve never tried this exercise. Slow and controlled movements will smoke you just the same as your uncontrollable ass-up hand waddle, minus the post-crawl pain!

Rocky Balboa is single-handedly responsible for half of our nation’s total knee replacement costs over the past three decades. You heard that right. Because of the Italian Stallion, men and women across the world gravitated towards the stairs for their primary form of exercise. 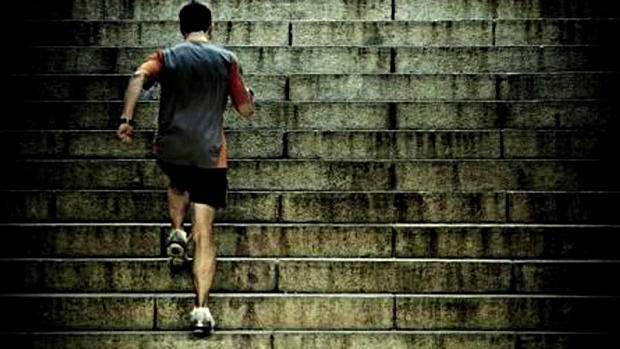 I mean, what’s more badass than sprinting up stairs and looking down to admire your conquest? I’d argue joint health and the ability to walk, for one. It’s a good thing Rocky is fictional or he would’ve been limping into the orthopede’s office pleading for the knife at the age of 46.

For a majority of people, adding incline and stairs to an already painful gait is an expensive recipe for disaster. If you plan on using stairs conservatively in your training (less than once per week), you may be able to make it through this joint minefield. If not, you may be in for a long, painful ride that doesn’t involve a final round knockout of a biochemically engineered Russian.

Realize that your effort to try and relive your high school football days by running stadium stairs will result in repeated trauma to the knees and lower back. After a while, your articular cartilage will resemble ground beef rather than a functional shock absorber. Time to limit that punishing damage!

Do This Instead – Strict Single-Leg Step Up

If you’re capable of doing these without cheating, they can be one of the most metabolically torturous leg builders in the gym.

Do these in a non-alternating fashion and make them extra challenging. When you feel your quads start to spasm, when the sound of your heart pounding at maximal rate is muffling the sound of your breath, go up 5 pounds in each hand.

The sheer impact being sustained by the knees, hips, and spine from burpees, box jumps, and the like is downright outrageous. 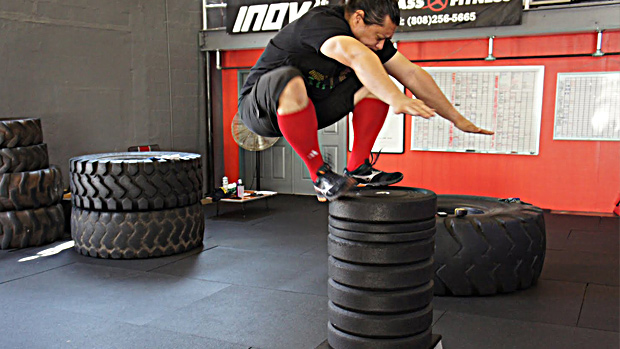 Sure, box jumps can be a great way to activate some fast twitch muscle fibers before heavy squats or pulls, but don’t get confused – this type of intelligent, goal-oriented programming isn’t the problem.

The problem is flailing up and down a 24-inch box for 15 consecutive minutes while sustaining contusions to your shins and thinking you’ve done something productive.

Movements that involve a huge amount of external force production need to be programmed with caution, which is rarely, if ever, taken into account. Any time you’re depending on your muscular system to generate high amounts of force and tension to complete a physical task, you’d better respect the damn process.

This isn’t the type of movement that you just grind through. Due to the impossibility of repeatedly performing a plyometric movement without a mechanical breakdown of form and technique, the likelihood of suffering an injury becomes significant.

There’s no argument that burpees can leave you with your head in the garbage can. In our ignorant fitness society, where the value of an exercise is determined by how crappy you feel afterwards, burpees have been elevated to the single best form of conditioning ever conceived!

Do This Instead – Speed Squat

The speed squat eliminates ground reaction forces that can put a pounding on your joints, while recruiting muscle fibers more efficiently than its jumping counterpart.

Reducing joint stresses while increasing multiple forms of muscular stress leads to something called gains, in case you forgot what those look like!

Why Not Combine All These Destructive Movements?

If your goal is to be as self-destructive as possible without making the ultimate death jump into CrossFit, why not join a Cardio Boot Camp? 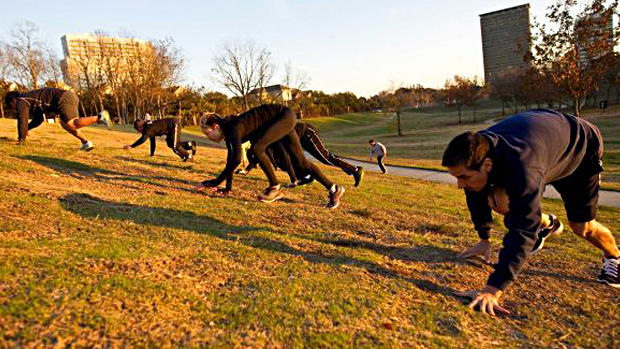 While gaining ground as one of the most popular forms of structured group training in our industry, Cardio Boot Camp has combined the top three most damaging conditioning methods with a little bit of what I like to call reckless and irresponsible exercise programming.

Unqualified coaches running around municipal parks every weekend with their band of misfits is doing little to no good elevating our industry to a more respectable state. Sure, they have some catchy chants and practice dysfunctionally fun ways of producing sweat stains in your dumpy-looking workout attire. Still, the questions remains, is that swamp ass you worked so hard for leading to anything other than a powerful form of exercise self-justification?

I guess if you make it out of the workout alive, and with all your lumbar discs intact, it’s the superior alternative to slurping down a white chocolate frappuccino with extra whipped cream at 8AM on a Saturday.

Quit trying to make exercise fun and comparing it to other things that supposedly produce joy like binge eating Twinkies and watching reality TV marathons. Proper training should do a few distinct things for you. Without them, you’re just wasting your time, money, and energy.

I’m not talking about your quads burning after a set of squats, more like burning nerve pain shooting down your legs causing numbness after your horrific kettlebell session. Lesson one of being a coach is do no harm. (Maybe that wasn’t covered in the online personal trainer certification course?)

And whatever you do, protect your body against the madness, which is the sadistic and debilitating fads of the industry like these three forms of conditioning. You only get one body. Better treat it right.