Planks. Can something so boring actually be worthwhile? Done properly, they have potential. They strengthen the abs and bullet-proof the lower back muscles. They can even improve your balance and your posture. But they're still boring, especially if you're talking about the standard plank and trying to do it for time. Staring at the carpet for up to 10 minutes isn't fun... or very effective.

The first step in making planks more effective and less boring is to learn the RKC plank where you focus on intensity over duration, attempting to fully activate the core and glutes. You assume the same position as you would with a regular plank, but instead of just lying there like a hood ornament you do the following:

Not only is the RKC plank far more effective (and efficient) than the lazy plank-for-time, but it prepares you for active planks where proper execution is critical.

Active planks feel like a punch to the gut. It's essential you feel confident in your planking ability before progressing. That requires good form. So regardless of which of the 14 plank variations you try, be conscious of your body position and avoid these mistakes:

Your hands should be directly under your shoulders except when doing certain variations where you have to move your body position forward. Avoiding these mistakes will help you get the most out of these exercises. In most cases, this will require slowing down and doing fewer reps (or using less weight) than usual.

To ensure you're feeling this one, make sure your knee drives are controlled.

For added difficulty, perform this with the knees going out.

Generally speaking, taps are easier than lifts and moving the legs is easier than the arms.

Once you're comfortable with each tap and lift, try something more difficult, like the around the world.

Or the double-limb (2-point) lift:

These can be performed with your hands or feet.

Or try them with your feet stepping onto or off a raised step or weight plate.

For added difficulty, experiment with an unstable surface.

Keeping shoulders above hands is critical to ensuring this remains a core exercise and not an arm workout. Elevating the upper body on a step or bench may be necessary for those lacking the arm strength.

Although a ladder is used in the video, doing them over a short distance of 5-yards works just fine. You'll get much more out of the exercise if the distance is kept short. The change of direction is where things get interesting.

Using the standard plank as the midpoint, this exercise involves transitioning from each of the side planks. For optimal execution, keep shoulders over hands throughout and open right up (head included) to the side-wall.

As far as difficulty goes, this unilateral variation with a reach-through is even more challenging.

Even though this movement doubles as a back exercise, you won't feel it in the back if you're doing it properly. Try a lighter weight and focus on stability and you'll get much more of a core workout.

Instead of trying to "get through" this movement, aim for a full twist, touching the limbs at each side of your body as opposed to underneath.

Knee to elbow is easier than hand to toe.

This exercise is deceiving. Nothing should move other than the arm grabbing the dumbbell.

Other than weight, you can increase the difficulty by moving the dumbbell in front of the shoulder.

Or adding a lateral raise after your pull across.

Along with keeping your body parallel with the floor and staying low, the key to a great bear crawl is getting the rhythm down. When one arm reaches forward, the opposing leg or knee should be moving simultaneously, towards the fixed arm.

Mixing it up with backwards bear crawls is useful when you have a short space, and attempting downhill bear crawls is highly recommended if you have the opportunity. When done properly (good technique + under control), they're the ultimate gut-puncher.

This is arguably the most challenging plank exercise there is, especially when your arms are well extended to the front.

Other than using all 10 of the exercises listed above, you can work your way up to this exercise by getting better specifically at rollouts and walkouts – essentially a rollout using your hands instead of a wheel. Both are performed from your knees and require full core stability to prevent extension (arching).

The active plank variations below are a little higher on the "dynamic" scale and tend to be more useful for a HIIT (High-Intensity Interval Training) session.

The twisting maneuver used with the breakdancer is very similar to the rotation that takes place with the opposing limb twist exercise shown earlier.

You'll recognize this first exercise by it's nickname, the Mountain Climber:

Although depending on where you learned it, you may have been taught to perform it more like the strider.

Jumping with two feet in is a lot easier than two feet out, like a frog.

But combining the two is where it's at.

Most people get back training all wrong. We asked our experts to give us their best training tips and tricks. Are you missing any of these moves?
Back, Bodybuilding, Training
T Nation May 12
Build your stubborn hamstrings with two tricks: use a band to increase the intensity of the peak contraction, and point your toes on the negative.
Bodybuilding, Exercise Coaching, Legs, Tips
Mark Dugdale May 26 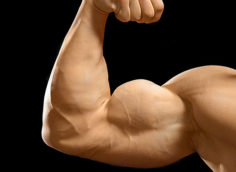 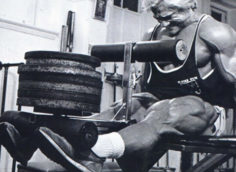