Most women want nicer abs and round, lifted glutes. Men want one of those things more than the other (so they say), but both men and women want to work the core quickly and effectively. And if they can get some metabolic conditioning in at the same time, it's a good day.

Too bad I see them wasting gym time by training these areas as separate entities when they could instead be capitalizing on how the glutes and core often work in concert.

That's just what the this ab/glutes/core metabolic exercise sequence does.

Change the Way You Think About the Core

When targeting the core and glutes together for a single training effect and for metabolic optimization, it's best to think "form follows function."

To really "get" that you can effectively target abs/glutes/core at the same time, you need to think of the core more as a cylinder that wraps around the middle of the body, engaged in the anterior chain, but supported all around the cylinder, from front to back and back to front, and top to bottom.

Joining and working them together increases training efficiency not only in terms of saving time, but in terms of targeted effects and metabolic enhancement as well.

The Power of the Plank Position

The most effective and efficient way to train abs/glutes/core together is from the plank position. No exceptions. 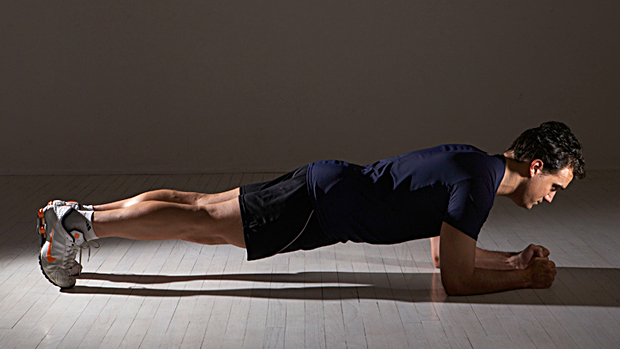 That's what makes this monster metabolic sequence so effective. Additionally, there are huge spillover effects to shoulders as well, as the shoulder muscles go back and forth from unilateral and bilateral stabilization support.

The abs/glutes/core sequence was conceived by considering a gymnast on the pommel horse and then tweaking the exercise sequences for overall fitness and body sculpting needs.

Below is the sequence as demonstrated by Kevin Weiss, a two-time World Champion in raw powerlifting. As he says, "Even when training for size, strength, or development, there's no downside to just 'a little' athleticism!"

Perform 3-4 rounds. (Four is the max and only for super-beasts). Rest 15 seconds or so between each exercise in the sequence. Here are the exercises in the sequence, broken down:

Full Sit-Outs These engage the muscles and demand recruitment through the speed of execution and kinesthetic awareness of muscles in space.

Alternating Hand to Toe Touch The relatively straight leg alters the movement pattern from the full sit outs and adds rotation and keeps muscle recruitment not only engaged, but for lack of a better term, "thinking" about that movement pattern change.

This enhances the kinesthetic awareness demands, much as it would for a gymnast on the pommel horse. Furthermore, by keeping the leg relatively straight just like in the full sit outs, we're still emphasizing longer lever arms, which demand more muscle recruitment and neural activity.

Alternating Contralateral Elbow to Knee Touch What we do here is continue the movement pattern in the core cylinder, but we shorten the lever arms (meaning bent knee and touching to elbows, instead of hand to toe). This change still engages substantial effective rotational elements, but now involves the intercostals as well because of the shorter lever arms.

Alternating Swiss Ball Step Offs Now the real fun begins. Because of the previous sequences and this change in movement patterns, we see tremendous lower abs and direct glute involvement, too.

The nature of this movement is about stabilizing and counteracting the movement of the leg, while the other leg takes on a more kinesthetic demand by contributing to stabilization and balance as well. At this point, the abs and glutes are burning.

Dumbbell Lockout Holds This movement completely alters the effects and demands of abs/glutes/core stabilization through an overhead hold.

The weight has to be heavy enough to create that demand. This movement acts as a finisher as the shoulders, serratus, paraspinals, glutes, and abs are all contracting hard in order to support the overhead hold.

Furthermore, because you're using the plank position in the first four movements, there's tremendous stabilization demands on the whole shoulder complex and serratus anterior and serratus posterior muscles.

Lastly, the whole sequence – done for three or four rounds – produces overwhelming metabolic fat-burning effects that will last you much longer after your workout than would a half hour of cardio and a few sets of sit ups and leg raises.

Do this sequence once per week at the end of a training session. Try three rounds, resting completely between each round.

A bar takes the ab rollout to the next level. Try a wide grip to hit the chest and shoulders as well as the abs. Have a super strong core? Narrow the grip.
Abs, Exercise Coaching, Tips
Drew Murphy July 7

These movements will make your spine and shoulders feel better and move better when doing big lifts. Check 'em out.
It Hurts Fix It, Tips, Training
Dr John Rusin October 24

There's more than one way to do a rep. You have to choose the right rep style for your specific goal. Here's your guide.
Bodybuilding, Powerlifting & Strength, Training
Christian Thibaudeau March 3