Shoulders need a mix of everything.

Shoulders, as opposed to other muscle groups which grow via a few main compound movements and heavy lifting, need a lot of everything. Why? Because different areas of the delt respond better to different types of stimulation.

Rear delts respond best to high reps and a lot of time under tension. But to get thick, dense, and beefy front and middle delts, you'll have to do some heavy military or behind the neck pressing.

There are two main keys to building shoulders: The first is variety (hitting different angles); the second is time under tension. The actual weight you lift here plays a secondary role when it comes to shoulders.

I'm not saying you have to be shoulder pressing with 5-pound dumbbells, but super-controlled movement with perfect technique will go a long way. What I like to do, as someone who hates high reps, is combine triple sets or giant sets with different angles, tempos, and exercises. Here's an example:

Start with a heavy military press. Do the first half of the set stopping just under your ears and pause there for 2-3 seconds. Do the second half with a normal smooth pace. Then do two variations of lateral raises – one leaning away and one standing upright to hit it from two different angles.

To finish up, do a rear delt exercise for high reps, focusing on a squeeze. Hold it at peak contraction for 2-3 seconds on each rep for the first half of the set. You can take this same idea and change it around for your preferences. The options are endless. – Amit Sapir

Focus mostly on isolation work and hit a lot of angles.

I like to use "growth factor" sets which combine 2-4 isolation shoulder exercises performed non-stop. What this will do is keep your delts under tension for at least a minute and up to two.

Now, there's no doubt that bench pressing and overhead pressing heavy for lower reps can increase the size of the delts. But it tends to focus the development mostly on the anterior (front) portion of the deltoid, and the stronger this part gets, the harder it will be to fully stimulate the lateral part, which is more important if you want to look wide, because the anterior delt will always want to compensate.

Try this: Overhead press for strength skill – high number of sets of around 3 reps with 80-85%. Go heavy enough to improve your fast twitch fiber recruitment and activate the nervous system, but not so heavy that it can become traumatic on the joint. And then do most of the workload in the form of growth factor supersets.

Take your pick from any of these shoulder supersets or come up with your own, as long as you understand the concept of keeping the delts under constant tension for 1-2 minutes.

The deltoid is a lot more complex than what we originally thought. There are more than three innervation points. Not to mention that the shoulder joint is the most mobile in the body so it's important to use a lot of different angles, both for full muscular development and shoulder health. – Christian Thibaudeau

Use a cable machine combined with traditional intensity techniques.

Sure, the standing barbell overhead press should be a staple, but if your main goal is to build bigger shoulders, pump some cables.

Now, it's true that most shoulder machines kinda suck. They lock you into one plane of motion, which is odd because your shoulders don't really work that way. But cable machines are different. As Charles Poliquin wrote years ago on T Nation, cable machines are as good as dumbbells, and in some practical ways, they're better.

I like the Free Motion seated shoulder machine (pictured on the side) or the standing version, though other brands make the same type of selectorized cable machine.

With it, you can quickly and conveniently manipulate all sorts of variables for growth:

* Tripped over the dog. – Chris Shugart

The best way to build shoulders is tri-sets.

The delts are composed of 50% fast twitch and 50% slow twitch muscle fibers (Madidis et al. 2007). So to target both types of fibers this protocol hits the specific rep ranges required and it incorporates both heavy and lighter loads.

The delts respond best to multiple exercises with short rest intervals, varying the resistance load and resistance mechanics (i.e. free-weights, machine, and cables). Give this tri-set a shot:

Want to make this tri-set more challenging? Rather than increasing the weight, which often leads to poor technique on lateral raises, do 1A seated, and for the machine lateral raises in 1B, slow down the eccentric (negative).

When doing lateral raises, don't focus on going heavy, but on feeling every millimeter of every rep. – Michael Warren

The flippant answer here is to tell you to overhead press and shut up. But the thing about overhead pressing is most people are really, REALLY bad at it and end up making it a standing incline press – plowing through their lower back and not hitting the shoulders as much as they'd like.

One exercise I like to use with clients is the legless or tall kneeling scrape the rack press.

By kneeling on the ground you take the lower back out of the equation, which automatically makes it more challenging because it's harder to cheat. Moreover, because you're pressing INTO the rack you'll get more serratus activation and anterior core recruitment which will nudge you into a little more posterior pelvic tilt (better overall alignment).

I'll often have my clients perform a heavy-ish set of these for 6-8 reps, followed with a lighter dumbbell variation so they can really feel the delts work. Most guys have a hard time getting their delts to grow because they try to "muscle" everything and use too much body-English (bouncing around at unnecessary levels).

Follow the scrape-the-rack press with one of these two moves using light dumbbells, 10-20 pounds.

To build delts, you need to learn to contract your delts. Here's how:

To the iso-dynamic lateral raise.

If you want to build sick delts then continue lifting heavy and building strength, then cap off your workout using the iso-dynamic lateral raise. This method uses a crucifix hold at the beginning of a lateral raise to improve your mind-muscle connection and supercharge shoulder growth, particularly at the medial head.

Since the medial head is notoriously difficult to recruit, this method will help you recruit stagnant muscle fibers, place a ton of muscle-building metabolic stress on your shoulders, and provide plenty of tension to simulate growth. Use a pre-set hold for 10-20 seconds, followed by 10-15 reps. Repeat for 3-5 sets with 30-60 seconds rest in between. – Eric Bach

Giant sets of side laterals using the 25-5-10 rep scheme. 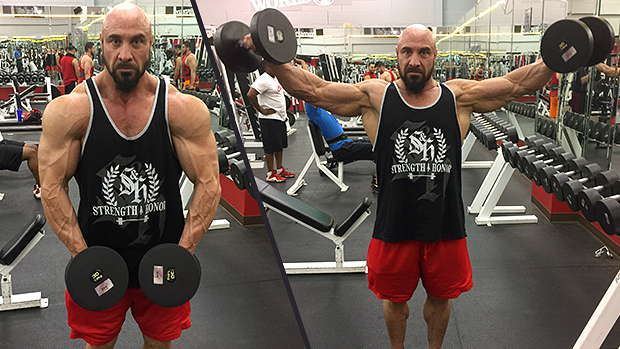 The training tip that matters most for shoulder development is two-fold.

Most lifters will, at some point, have shoulder issues, and even those who don't have symptoms normally have something that's structurally out of whack. Most people over the age of 50 have some sort of rotator cuff pathology, so you could make the argument that everyone is kicking the can down the road with respect to shoulder pain in a lifting environment. That road is just a bit longer for some people.

With that in mind, the best training tip for long-term shoulder development is to determine your tolerance for overhead pressing. Cycle it in and out throughout the month and/or year. Substitute in the landmine press (shown below) or extra horizontal pushing exercises here and there.

Also, remember that an ounce of prevention is worth a pound of cure. Work in a bit of external rotation work at the end of your upper body sessions; as little as 2-3 sets per week can make a big difference. Do some prone trap raises as part of your warm-up. Use a foam roller on your pecs, lats, and upper body. Pull more than you push. All these things bump up your overhead pressing tolerance and yield better long-term results. – Eric Cressey

Do the eccentric accentuated push press.

When it comes to building massive shoulders the key is strategic overload, eccentric muscle damage, and time under tension. The eccentric accentuated (which means lower slowly) push press requires each of these hypertrophy-inducing mechanisms. That makes it one of the most effective functional mass builders for the entire shoulder region including the delts, traps, and upper back.

Simply do a standard push press by using both your low body and upper body to drive the weight overhead. Pause in the top position for several seconds, then slowly lower the barbell for 4-5 seconds. Pause in the bottom position before repeating this for 3-6 reps.

Because the load should be 15-25% greater than what you could typically handle with the strict press, doing these with a controlled negative will increase the growth-inducing benefits. Think of it as heavy negatives for the shoulders but instead of having a spotter help you lift the weight up (like you would on a negative bench press set), your legs will assist instead.

Besides the hypertrophy stimulus these create, using inordinately heavy loads with strict motor control and rigid body mechanics does wonders for strength and neuromuscular efficiency. As a result, your numbers on just about every upper body exercise should dramatically improve, which will have a direct impact on building gigantic shoulders.

Due to the extended time under tension (each rep should last a minimum of 8 seconds), a full set should last about 30 seconds. Using heavy loads in an overhead position for such an extended period of time triggers massive gains.

Want to up the challenge? Do your final set then drop the weight in half and add more strict reps to failure. The discomfort will be almost unbearable but the resulting shoulder growth will be well worth the pain. – Joel Seedman, PhD

In addition to the various overhead pressing and upright rowing exercises, you should be performing front, side, and rear delt raises from different positions and with different forms of resistance.

My favorite methods include:

If your delts are a weak link and you're striving to rapidly improve them, hit delts three times per week with 9 sets per session. – Bret Contreras

Cluster sets are magical. Here's how to use them for pull-ups.
Tips, Training
Derek Binford September 25 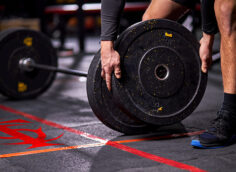 Spend more of your gym time working on what matters. Here are four simple ways to set up, clean up, and get a fast workout.
Tips, Training
TJ Kuster November 6

Start with 10 presses and 20 front squats. On the next set, do as many presses as you can, then double that number for front squats. Continue until jacked.
Exercise Coaching, Overhead Press, Squat, Tips
Ben Bruno August 16