I've spent a lot of time in commercial gyms over the years. I can say with absolute certainty that 99% of what I've seen was unimpressive. Most people simply don't train hard and don't perform the best exercises.

However, there have been rare times where I waltzed into the gym to find some throwback from the caveman era performing a challenging exercise with a ton of weight and intensity. I've found myself on several occasions saying to my workout partner, "That dude is a serious badass!"

Just how does one go about getting labeled a badass in the strength training world? Obviously you have to get strong. No matter how cool the exercise looks, nobody gives a shit if you're snatching 65 lbs.

You also need to have good form. This usually comes from good core stability induced from heavy lifting with good form over the years. Even if you use a ton of weight, nobody cares if you perform a wobbly, energy-leaking squat that doesn't resemble anything athletic. Finally, you need to be performing badass exercises. Without further ado, here are the ten manliest exercises:

Branch Warren popularized chain dips. He'd drape a couple pairs of heavy chains over his shoulders and start busting out sets of high rep dips. It looks and feels really cool to have chains draped around your body, sort of like Mr. T. This exercise works a ton of neck extensor musculature while also hammering the pecs, front delts, and triceps.

You don't hear much about the Zercher squat these days. Most people hate doing them because they hurt like hell. Holding a heavy barbell in the crux of your arms is one of the most painful things you'll ever do. However, the placement of the barbell increases the load on the core and glute musculature, in addition to hitting the quads, hams, and calves, which makes it an extremely effective exercise. So try to deal with the pain; eventually your body gets used to it.

I don't care what anyone says, if you can bust out a 225 lb clean and press, then you are pretty badass. That's just all there is to it. This exercise works the hell out of the traps, delts, and triceps. Get to 315 lbs and you've now reached Lattimer status from the 1993 movie, The Program.

I once saw some beasts in the gym doing these and was enamored. They started off with six 45-lb plates and did five reps. A partner would strip a plate off and the lifter would get five more reps. This would continue until there was only one plate left on the bar, so the lifter would execute a total of 30 reps. This exercise works the lats, scapulae retractors, and biceps, as well as working the entire posterior chain isometrically. Two words: freaking brutal!

One set of squats can't be that bad, right? Wrong! If you don't know about 20-rep breathing squats, then read up on them as these bad-boys have been around forever. They might just be the hardest single exercise known to man. You take your 10RM and get 20 reps by "resting" in the top position and taking deep breaths. A set can last anywhere from three to ten minutes. If your quad growth has been stagnant for a while, focus on these for around six weeks and you won't be disappointed.

Ronnie Coleman popularized these years ago when he'd walk outside Metroflex gym and start lunging up and down the parking lot with 185 lbs on his back in the blazing Texas heat. The parking lot lunge will hammer your quads and glutes. To Ronnie, this "ain't nuttin' but a peanut."

Matt Kroczaleski popularized these explosive high-rep one-arm rows with the heaviest dumbbells your gym carries. Essentially, they're heavy, high rep, one-arm rows with a little bit of English. In Kroc's words, they're "whatever dumbbell you think you can't do for one rep x 50."

He credits these for packing on slabs of lat mass and increasing his deadlift strength. In addition to working the lats, scapulae retractors, and biceps, Kroc rows work a ton of core as well. If you do them right, one set is all you need!

If you've seen video clips of Konstantin Konstantinovs busting out various types of deadlifts, then you understand how badass deadlifts can be once you get strong. Many would argue that the deadlift is the most functional exercise of all, as it annihilates the entire posterior chain in addition to working the quads too. Even the name "deadlift" reeks of manliness.

You don't see many people doing yoke walks and farmer's walks these days because most gyms don't carry the implements. Even if they did, there usually isn't any room to do them anyway. However, if you have a garage gym or belong to a rare gym that allows you to perform heavy walks, consider yourself lucky.

These exercises are unbelievable total body strengtheners. In fact, spinal researcher Stuart McGill found evidence that the super yoke walk might just be the most challenging exercise for the spine due to the extreme load of the implement and the core muscle contractions required to stabilize the spine and hips. You don't need a yoke to do a yoke walk; a barbell works just fine, and heavy dumbbells or a hex bar can be used for farmer's walks.

There's no reason to hate on the bench press. It's the most popular exercise in the world because every guy wants a nice set of pecs. But powerlifters realized long ago that if you bench press in a certain manner, it's a total-body exercise. They figured out how to use their lats and legs in addition to their triceps, shoulders, and pecs in order to maximize the weight they could press.

Learn how to bench like a powerlifter and keep a strong low back arch, pull the bar down lower on your chest, and get some good leg drive. Everybody is impressed with a strong ass bench press.

In all honesty, this list could go on and on and on, as there are plenty of manly exercises. Any variation of the lifts you find in Olympic weightlifting, powerlifting, and strongman training is pretty damn manly. There are plenty of badass bodyweight exercises you can do as well...for instance the muscle up and pistol.

Honorable mentions go to the cambered bar good morning and weighted chin up. And it's always fun swinging sledgehammers and pushing trucks around. When you're super strong, everything looks manly...a Turkish get up, a one-arm snatch, a barbell curl, and even an explosive landmine.

The point of this article is to illustrate that the manliest exercises are performed with heavy free weights and are usually performed on your feet. If all your training is done on machines, while lying down, or with pink dumbbells, then you probably aren't getting the most out of your routine. In the words of King Ronnie: "Everybody wanna be a bodybuilder, but nobody wanna lift no heavy ass weight!" 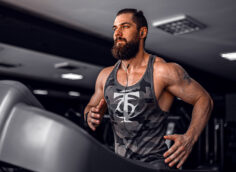 Should you start your squatting career with a bar on your back? Probably not. Instead, follow this progression.
Legs, Squat, Tips, Training
Dr John Rusin August 1

This exercise hits both the long and short heads of the biceps, which most biceps exercises can't do.
Arms, Bodybuilding, Exercise Coaching, Tips
Michael Warren May 30