Ellington Darden is a fitness legend that rose to notoriety in 70s, 80's, and 90's. You may not recognize his name, but you've undoubtedly used exercise techniques or principles he developed. You need to read this article — word for word.

I'm a treasure hunter. I've devoted my education, career, and entire adult life looking for something that I'd already found 47 years ago — but didn't realize it until recently. I'm exhilarated with finally seeing the treasure, but I'm also frustrated and angry that I wasn't able to enjoy the exploits of my discovery over the last 47 years.

My treasure is muscle — not just muscle, but the hidden principles for building muscle fast. I'm not claiming that I've found the very best way and that nothing else will ever top it. There's no way to prove that. However, I am telling you that I've never seen anything else close to it in all of my 50 years devoted to elite-level fitness — and I've seen and tried just about everything.

I trained some of the most genetically gifted bodybuilders who've ever lived. This discovery would've been of tremendous value to them, but that's not where my interest lies. I would consider it my most significant accomplishment if I provided a doable clear path to success for the millions of people who'll never stand on stage or be competitive athletes.

Regardless of your genetic gifts or fitness levels, I believe I can now show anyone how to rapidly build muscle while developing elite-level fitness from the same workouts. I've found there's a distinct synergy between the muscle and fitness goals — that you get better muscle gains when done together in the same activity than when worked separately.

I promise to deliver possibly the most revealing information you've ever read about the subject, and I'll provide an exercise plan so you can get started right away. But I need to first put all of this in context for clarity. So please carefully read the next several sections before getting to the good part.

I first had the idea for metabolic challenges in 1974. I was at the Super Bowl in Houston, Texas, where the Miami Dolphins beat the Minnesota Vikings 24-7. But the game was long with little excitement.

The Dolphins could've won by more than 50 points — and they should've — but they didn't. What did they lack? They lacked the metabolic conditioning required for sustained high-level offensive drives.

At that time, I was director of research for Nautilus Sports/Medical Industries. I realized at the game that the answer I was looking for had to be a unique type of no-rest strength training that built muscle while conditioning the body.

"How can you build muscle, increase strength, reach your highest level of performance capacity, and then go even higher — all from the same workouts?"

That was the question that led me to develop metabolic challenges for building muscle.

Nautilus had the resources to fund a study at a major university to demonstrate the effects of training with no rest between exercises. We could then show that brief high-intensity workouts on Nautilus machines could increase muscular strength, joint flexibility, and cardiorespiratory endurance from the same workout.

In 1975, Nautilus did the study at the U.S. Military Academy at West Point. The 19 Army football players in the metabolic challenge group trained three times per week on Nautilus machines, with no rest between exercises. The standard training group consisted of 16 Army football players who used free weights and traditional strength training methods, but they added rest periods between sets.

Both groups were tested several different ways and included a 2-mile run. The study lasted six weeks, and the overall results were overwhelming in favor of the metabolic challenge group. Here are the strength gains and 2-mile run improvements:

Even with those superior results, I didn't realize just how essential the workout pace was and how it synergized muscle gains. In four years, it was dropped from the Nautilus principles. Instead, we focused on Nautilus machine efficiency, using good form, and pushing people harder toward exercising to failure.

Form began to erode when most trainees found it easier to show "progress" if they cheated on exercise form and rested between exercises. Both practices allowed for heavier and heavier weights to be lifted without any real progress being made.

Poor exercise form and training to failure sadly remained the only mainstays of the original Nautilus principles. It was a painful and tedious protocol that produced minimal results.

Training to failure was a practice I wish I could've stopped in the '80s and replaced with this much more productive exercise prescription. Training to failure actually limits the number of muscle fibers stimulated. I suspected then and now know that you can stimulate more muscle fibers and make a deeper inroad by applying specialized loading methods such as 30-10-30 and stopping one or two repetitions short of failure.

It's a more effective way to train and less taxing on your nervous system. You stimulate more muscle fibers, avoid overtraining, recover faster, and can exercise more frequently. Together, this produces the fastest and greatest gains I've ever experienced.

I recently trained my 18-year-old son Tyler, using these exact principles, for the 30-10-30 project. In 14 workouts, Tyler got in superior athletic condition and gained 17 pounds of lean mass — and I never once increased his exercise weights.

Here are the new principles that should've been implemented 47 years ago: 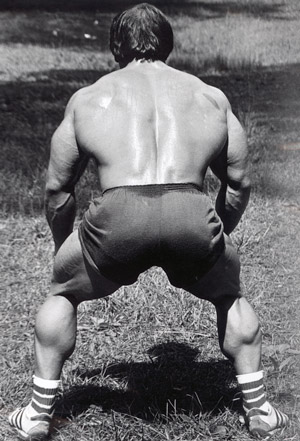 I've used variations of the chin, dip, run cycle to get many athletes in top shape. It's highly effective for metabolic conditioning while building muscle, and can be done just about anywhere. All you need is a chin bar, dip station or parallel bars, and a 40-yard clear path for sprints.

You're going to do a chin-sprint cycle for 60 seconds followed by a dip-sprint cycle 60 seconds, with no rest between the exercises or cycles. The first week consists of three compete rounds, consisting of 3 sets of chins and dips and 3 sets of sprints. You'll add an extra double-cycle each week for four weeks. The goal is to be able get 6 complete double-cycles in 12 minutes. If you can do that, you are an incredible athlete.

The Wednesday workout is different from the Chin, Dip, Run cycle. It's a single-joint workout consisting of the following five exercises:

Do one set of 8 repetitions and move 20 seconds or less between exercises. Add 2 reps to each exercise on the following Wednesday and another 2 reps the next Wednesday. During week 4, do 12 reps and a final 30-second lowering on each exercise.

For a full training program, check out Ellington Darden's 30-10-30: Metabolic Challenges for Building Muscle below:

This push-back variation focuses more on your delts than your chest.
Exercise Coaching, Push-Up, Shoulders, Tips
Nick Tumminello May 21

Women can often get away with sloppy technique, but should strive for perfection anyway.
For Women, Powerlifting & Strength, Training
Mark Rippetoe October 14 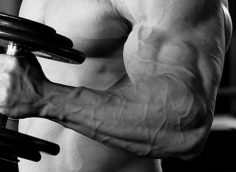 This workout will add size to your biceps quickly... if you don't die. Take a look.
Training
Jason Brown November 17