In 1998, Daniel came down from the mountain carrying two tablets of iron. Here's what they had written on them.

When the web was in its early infancy, High Intensity Training enthusiasts, self-labeled "HIT Jedis," dominated the discussions. Pity them, for they knew not what they do.

They allegedly had horrific genetic limitations as they constantly referred to themselves as "hardgainers." Training more than eight times a month was considered insane.

And I began to notice something else – perhaps their bodies were designed to type as they'd post thousands of times a day discussing the most minute details of training. But, they rarely, in fact, trained.

To them, the key was to bring each and every muscle to momentary failure and then rest it until it fully recovered. By doing so, you would shed fat and have the body of whatever God, in God's wisdom, had ordained you should look like.

It just doesn't work this way.

The big lifts – the Olympic lifts and those in powerlifting family – will do more for your development than all the machines in every facility in the world. You may be able to find a weak-looking 400-pound bencher, but you won't find two.

The big lifts with the big weights, within reason, will get you bigger, stronger and, ideally, faster. It's always been true.

2 – Constantly strive for more weight on the bar and move it faster. 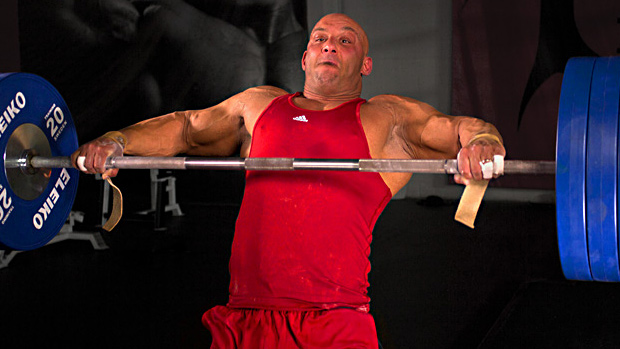 When I wrote this, the only "Westside Club" I knew was in Culver City, California, the home of some of the most amazing lifters and throwers in history. They moved big iron and loved to experiment with ideas and training methods.

Here at T Nation, we're used to reading about the Westside method with its dynamic work, chains, box squats, and all the rest from the minds of Simmons, Tate, and Wendler, but in 1998, not a lot of people outside of track and field appreciated the idea of moving the weights faster.

Danny Sawaya is a strength coach whose method is built on sensing bar speed. If it slows, either go lighter, stop, or recheck your recovery. His method is more complex than that, but not much more.

3 – The best anabolic is water.

Not long ago, someone online took me to task for this point. I told him that it's called hyperbole and I tried explaining it.

I asked him, "If you're eating veggies and protein and drinking water, who gives a shit about anything else you're doing? Maybe calories in/calories out isn't perfect for fat loss, but it is pretty good for everything else."

My point was simple: If you aren't doing the basic-basics, forget about the rest. You can't out-roid three hours of nightly sleep and a diet of doughnuts and bagels. Sure, you can out-roid a bad lifestyle for a while, but, long term, the basics of eating food and drinking water are going to get you where you want to go.

Regardless, anabolic steroids have been around a while and I still think most people who choose to take them begin too soon. In college, a guy from another country told me that he had been "juicing" for a few years. He was a very poor thrower and it made me wonder just how bad he would be if he were "clean."

He told me that at his gym, all the older guys were taking them, so he did, too. The issue? He never even got the chance to figure out how far and how strong he could get without the magic. If you're an elite thrower, you'd better be gifted enough to bench 400 and clean 300 without any steroid support. If you can't, you don't have the aptitude.

This reminds me of a recent rant of mine concerning parents who insist that Billy or Cindy miss sports or activities in high school to take SAT prep courses. They're missing the big issue, which is this: If you have to study to prove you have the aptitude, you don't have the aptitude. Sorry.

If I can drink water, sleep more, and eat normal and still defeat you while you're juicing hard, you probably don't have the aptitude. Sorry. Blame your genes.

4 – Did you eat breakfast? If not, don't ask me anything about nutrition. 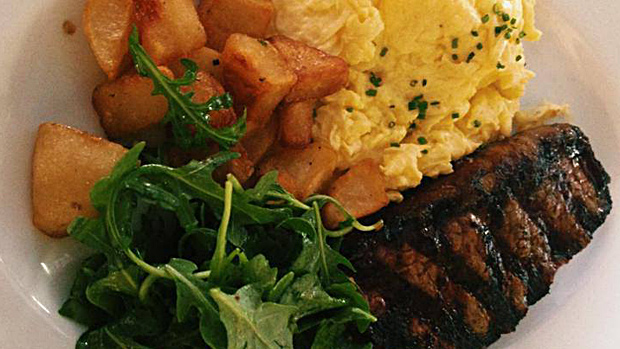 Since first laying down these commandments, intermittent fasting has really taken off. I first read about it in the magazine, Mind and Muscle Power, and then later here at T Nation in an article by Ori Hofmekler. Ori called it the "Warrior Diet."

Since then, many others have "invented" it too, but you have to go way back to Hippocrates if you want to know its true inventor. Back about 471 BC, he wrote this:

"Obese people and those desiring to lose weight should perform hard work before food. Meals should be taken after exertion while still panting from fatigue. They should, moreover, only eat once per day and take no baths and walk naked as long as possible."

The no bath and walking naked thing hasn't been discussed much, but this basic idea about fasting has obviously been around a long time.

Back to breakfast. I train in the morning and stopped eating a regular meal before training years ago. But I really hit breakfast hard. If you train in the afternoon or evening, you should really consider breakfast as your key meal, especially for protein. So, yes, breakfast is something you may want to eat.

5 – If you smoke or don't wear your seat belt, please don't tell me the quick lifts are dangerous.

Back in the 1990s, the internet was filled with doomsayers telling us that we'll all die from doing snatches and cleans. I hate to give any credit to CrossFit, but it's nice to see non-performance people doing the O-lifts again.

It's not that those lifts were "lost," it's just much easier for the local personal trainer to sit you down on a machine and have you push the little stack up and down versus teaching the Olympic lifts. Unfortunately, O-lifters don't spend enough money to keep the lights on. Machines are a lot easier to teach to a neophyte.

People also need to keep things in perspective. Lots of things we do in the gym are "dangerous," but most of them pale in comparison to the dangers presented by the big, bad, world, especially stuff that's easy to remedy, like wearing a seat belt, stopping smoking, or not running with the bulls while wearing flip flops.

I wasn't as smart when I wrote this as I am now. It should have said, "Go heavy, go hard, and go home."

If you're spending so much time at the gym that your mail is forwarded there, you're not dedicated – you've got a mental disorder. Enough is enough with good, solid training. 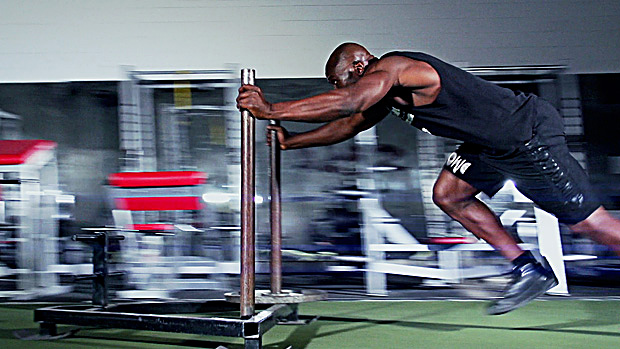 I'm always searching for quicker ways to reach goals in both my training and my coaching. The arrival of kettlebells helped me with the hip hinge and squat. The TRX has done miracles for balancing my pull and I use dozens of exercise variations with different sleds, wagons, and Prowlers.

These new tools have allowed me to toss out all kinds of other things. For instance, thick bars teach the deadlift and clean pull better than me talking; chains teach acceleration each and every rep; and ab wheels target the anterior chain better than a dozen core movements.

When you add something new, search for what you can throw out!

9 – Put the bar on the floor and pick it up a bunch of different ways.

I'll hit these two points together.

My philosophy of strength training can be broken down into these points:

I love the Olympic lifts and I still compete in them. The O-lifts are completed with the weight lifted and mastered overhead and it's easy to figure out a good lift or a miss. Picking weights up and putting them down is really all that strength training comes down to in the end.

In powerlifting, I still think the deadlift is king. There's no cheating with arches, depth, or equipment, and judges can't really make a bad call. It's the root lift of strongman contests and it's easy to figure out who accomplished the most.

As for loaded carries, nothing in my coaching toolbox approaches them as far as being a game changer. Do them.

"The body is one piece" is from John Jerome. Few people heed this advice, though. Instead, most of us train like we're building Frankenstein's monster. Arm day. Leg day. Freaking tibialis anterior day. But the body is one piece, and you have one digestive tract, one cardiovascular system, and one magnificent nervous system.

If you have trouble "here," you're going to have trouble "there." If we shut the supply of blood to your brain, your training will be impaired. That's not medical advice, by the way.

Thinking "the body is one piece" begins the process of seeing the life of the athlete, a training year, and a workout from a more distant vantage point. It's a global view, a paradigm shift, from seeing everything as bits and pieces like Frankenstein's monster to seeing everything as miraculously interconnected.

I love throwing and lifting. I like going back in the archives and articles of people from the past and trying to steal some insights. For football, I own John Heisman's book on the game (yes, that "Heisman") and a dozen or so other books that basically show us that nothing is new under the sun.

When I read articles, I often see the vision and impact of people who have died long years before the author's parents were alive. And it's great.

Studying Arnold isn't a bad thing for an aspiring bodybuilder. He didn't let much get in his way. If you want to be on the stage, you had better learn that lesson.

For strength athletes, figure out how John Davis was the first to clean and jerk 400 pounds after serving in WWII, using no drugs, and by following a very simple training template.

There are lessons there to be learned and the best ones stay with you. Case in point, I wrote these commandments in 1998 and I still stand by them.

This is gonna hurt so bad that you'll do it again and again. Because you're kinda crazy like that. Check it out.
Tips, Training
Paul Carter October 5

Forget about counting reps! Do your biceps and triceps sets for time instead!
Arms, Bodybuilding, Training
Tim Henriques June 5
Two of the hardest things about competing are sending in the entry fee for a competition and then not pulling out the last few weeks. Some of you don't compete and are just training for self-actualization, self-esteem, and to be healthier and more whole in your daily interactions in the journey we call a life experience.
Training
Jack Reape September 2